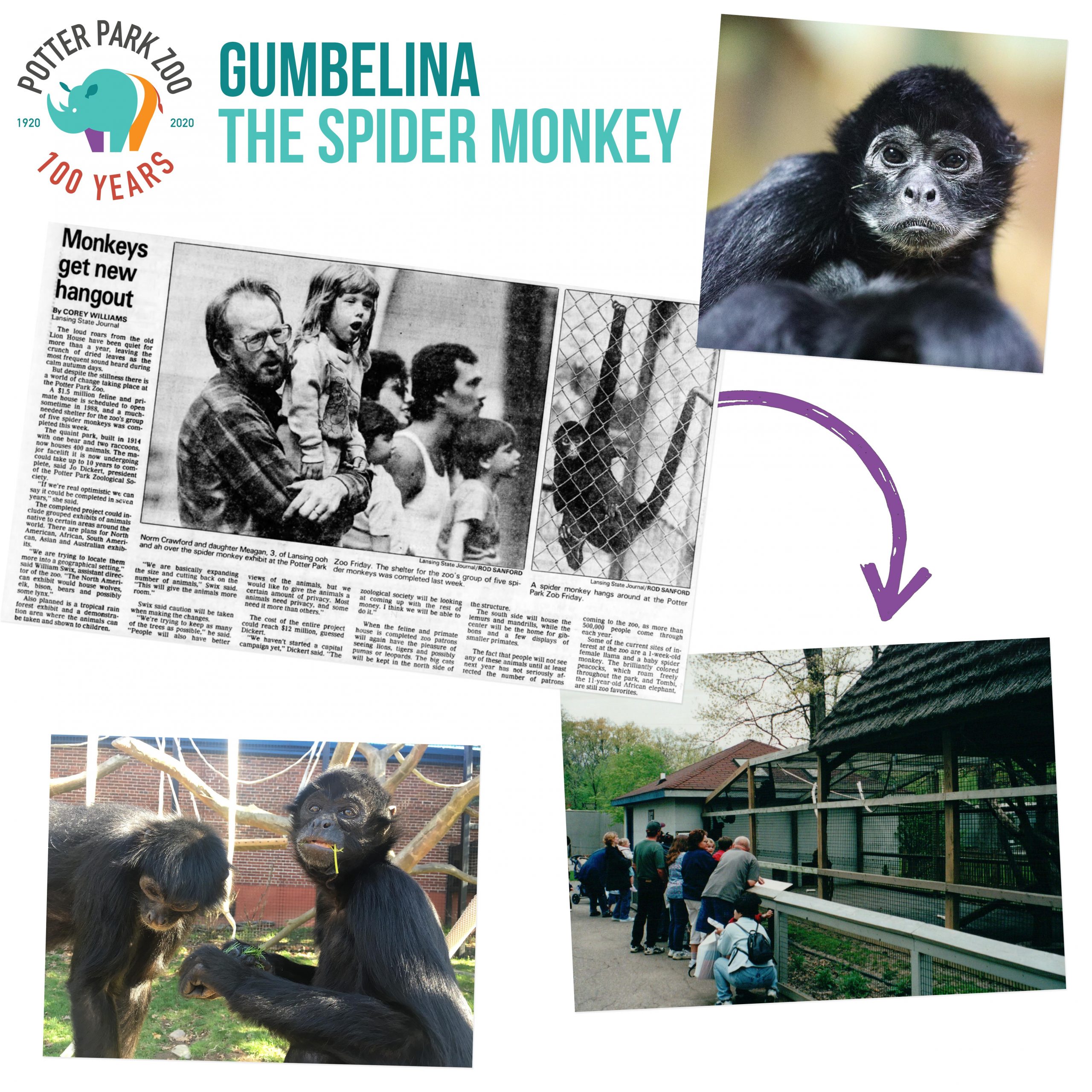 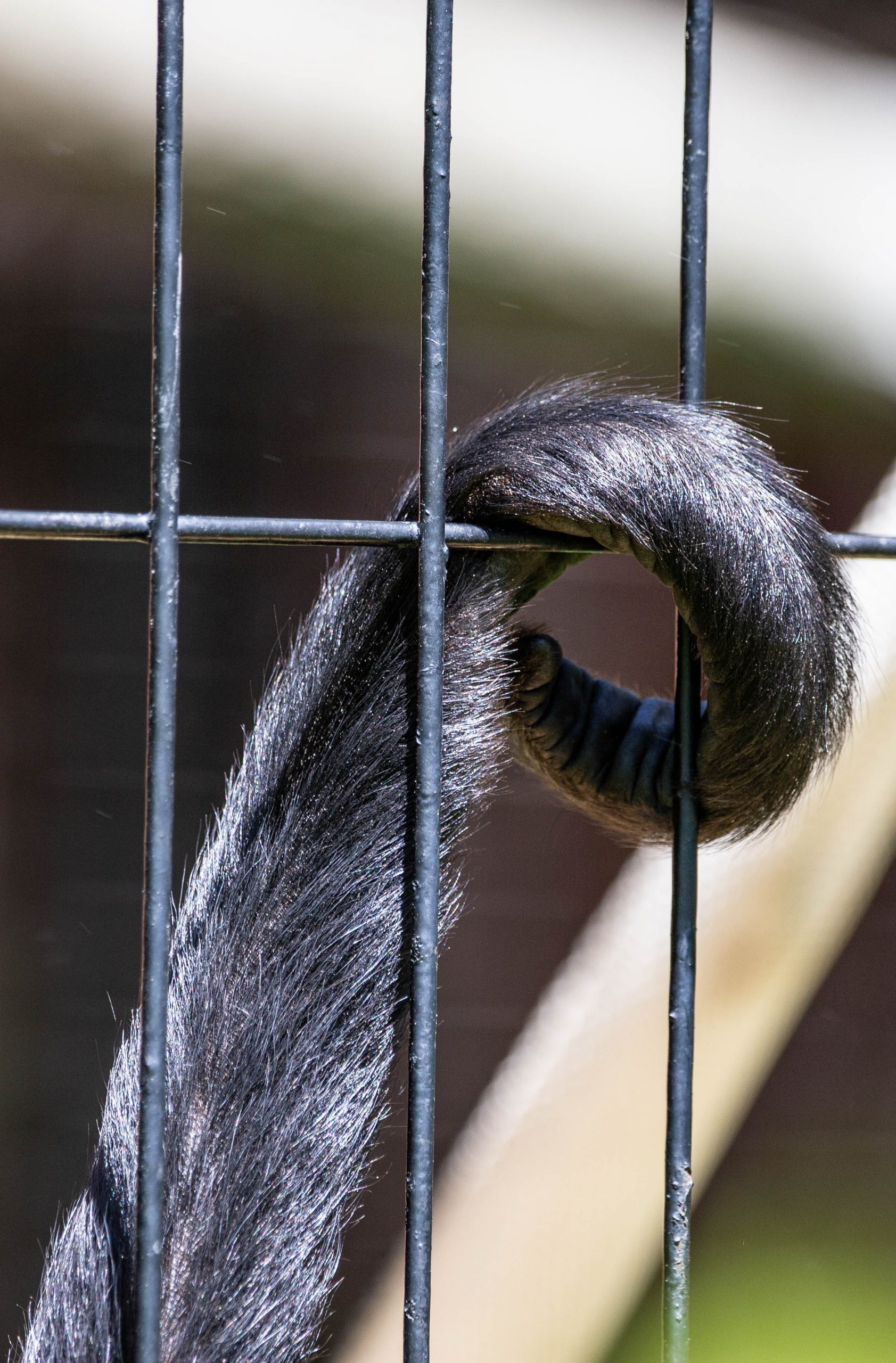 Gumbelina is a black-headed spider monkey that has resided at Potter Park Zoo for over 30 years. She has been a prominent member of the very active group that has been fun and fascinating to watch.

Born in 1981, Gumbelina is the oldest and only female in the group of five. She is the matriarch and remains very active, leading the group around the exhibit in climbing and swinging. She is very interested in enrichment, quick to explore and the last to keep checking to make sure she does not miss anything. With great control over her prehensile tail, she is able to use it as a fifth limb: climbing and swinging through the exhibit, grasping items of interest, and even hanging by and supporting her body weight to free her hands for foraging. The tail has an area of bare skin to enhance its grip, with its own unique “tail print,” much like the human fingerprint. 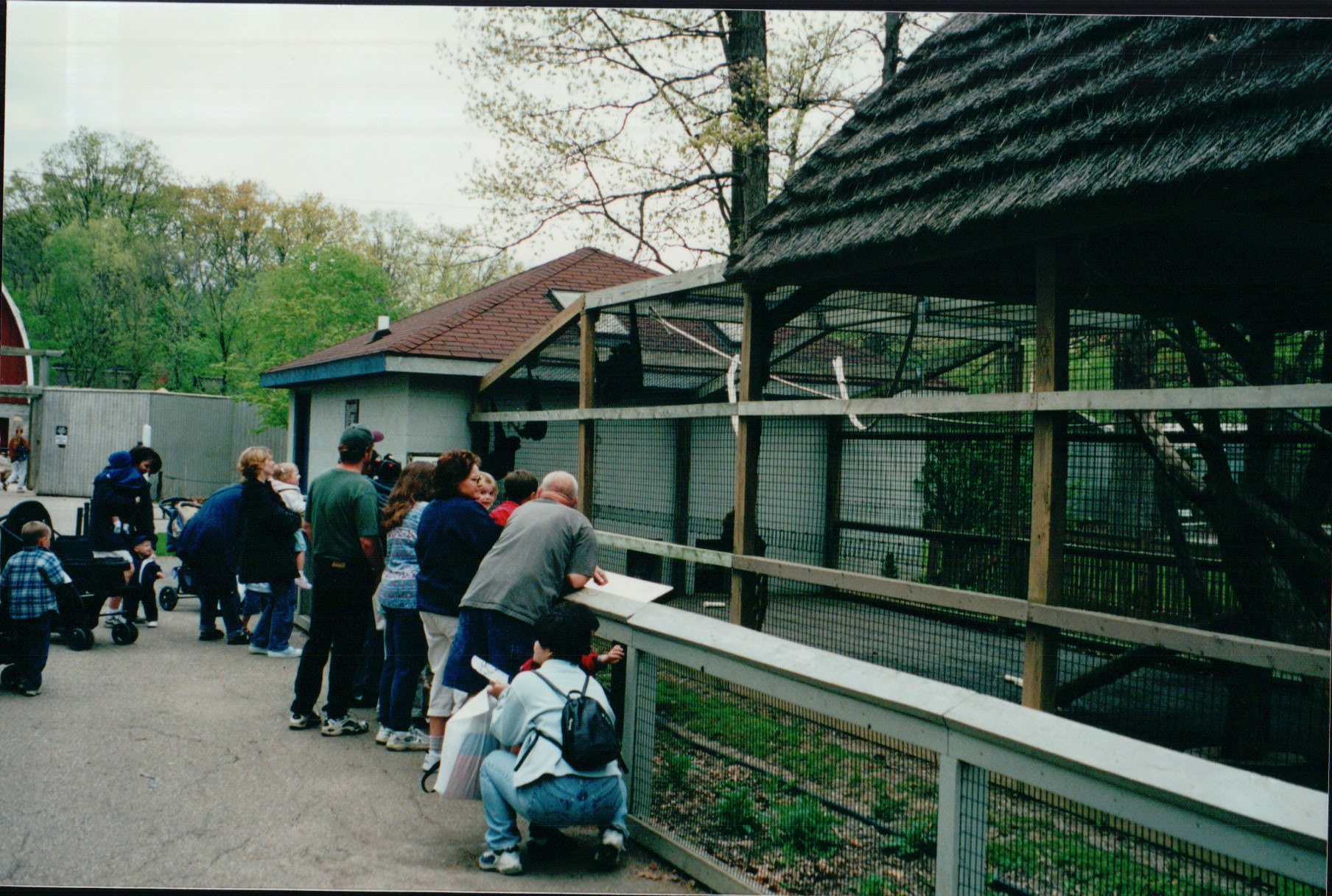 Various species of monkeys lived on the old Monkey Island in the years after it was completed as a federal Works Progress Administration (WPA) project in 1936. Spider monkeys were first recorded there in the 1960s. In the 1970s, twelve-to-seventeen monkeys summered on the island and wintered in one of the large exhibits in the Lion House. In 1987, five remained, and it was time to move animals out of the Lion House for its renovation. Those five – two adult females and three young males – shifted into the new spider monkey exhibit with newcomers Gumbelina and Sonny. The three young males left in 1989. Sonny and the three females – Gumbelina, Buddy, and International – produced the younger spider monkey population that would inhabit that exhibit for almost three decades. Gumbelina and Sonny still remain at the zoo.

The loss of winter quarters was not the only reason to move the spider monkeys to a year-round exhibit. Monkey Island’s moat was filled with water, which is what kept the monkeys on the island – until they learned to wade into the water to get the food that visitors tossed to them in those days. That led to losing their fear of the water, and they kept escaping the island. 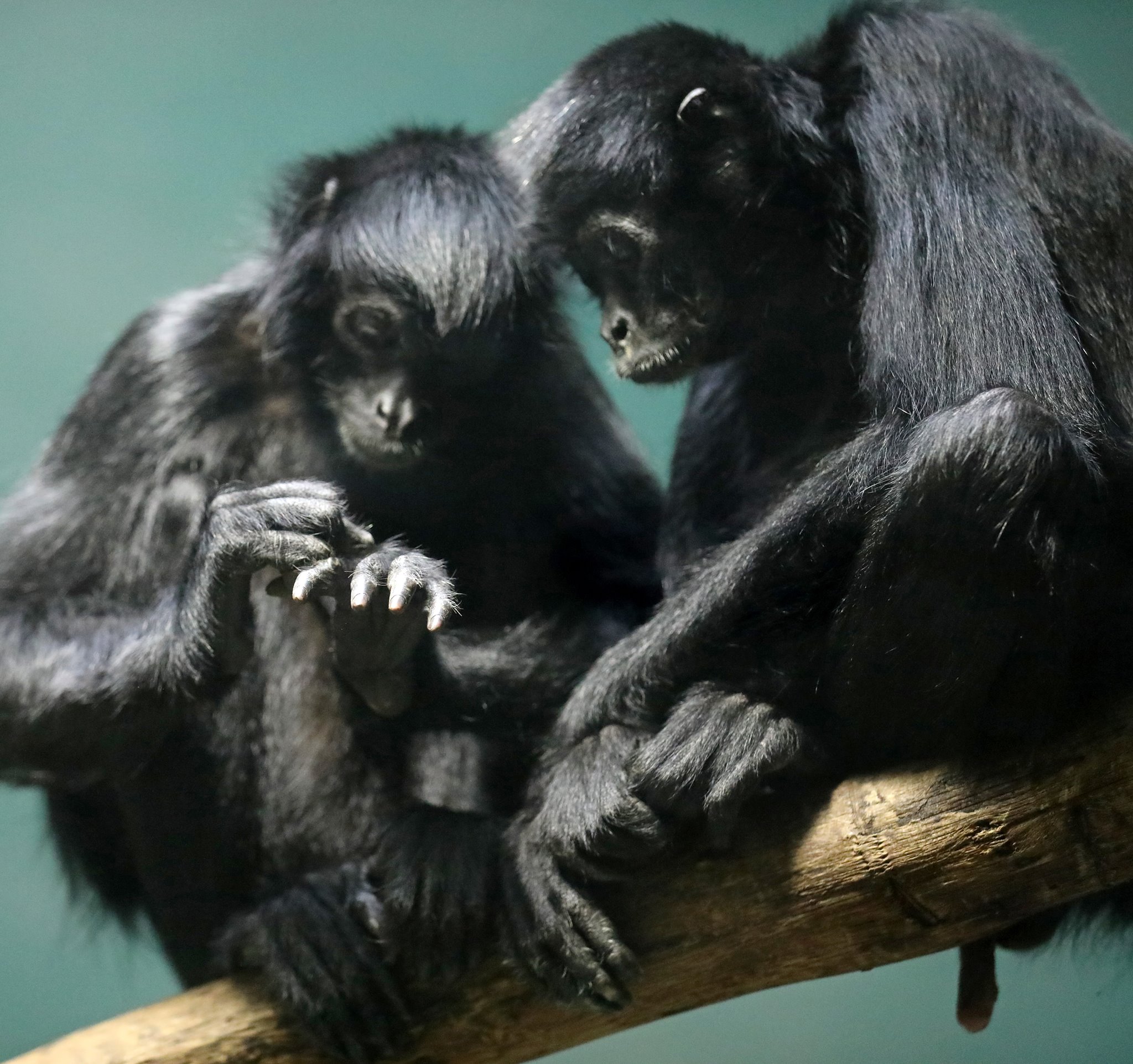 Sonny was very prolific, resulting in fifteen offspring.  Gumbelina produced five of those young, including Jasper and Marcel, two of the three twenty-somethings that still share an exhibit with Gumbelina and Sonny. (The third, Leon, was born to Buddy.) A daughter, Becka, lives at John Ball Zoo in Grand Rapids.

Typically, young left the group to avoid interbreeding, until the group was down to Gumbelina and Sonny and sons Jasper, Marcel, and Leon. Then the males were neutered to reduce aggression among individuals in the troop.

Note that spider monkeys are endangered and have Species Survival Plans (SSPs), which manage spider monkey reproduction in zoos. Our individuals, however, are not part of the black-headed spider monkey SSP, due to their unknown lineages. 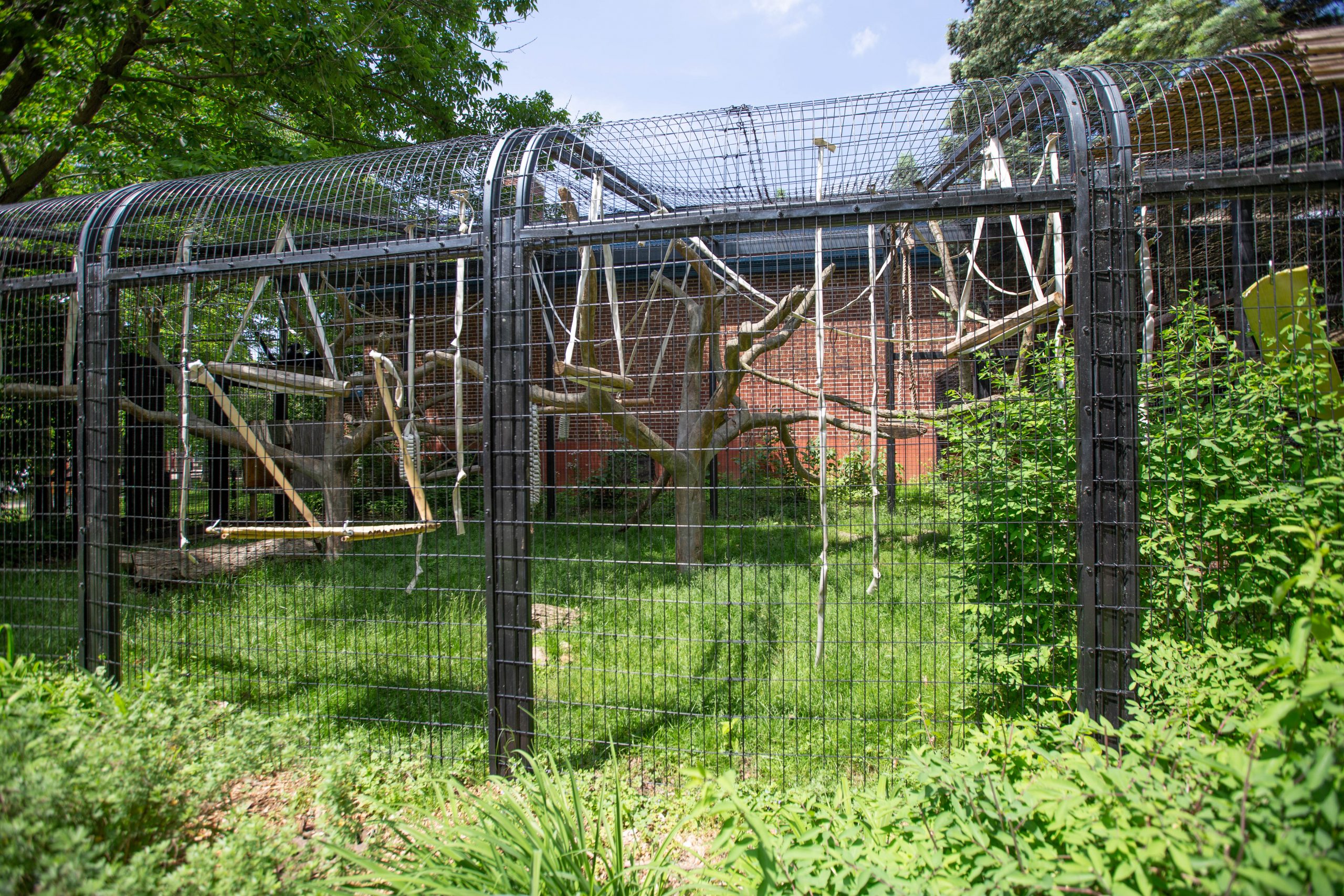 The local chapter of the National Association of Women in Construction was involved in the construction of the 1987 exhibit, arranging for contractors to donate labor to the cause. The enclosure housed the spider monkeys for years. There were lots of climbing and swinging opportunities, but cold weather kept them inside, off exhibit. A window was added in the 2000s to allow the monkeys to see out and visitors to see in during winter. In 2014 the spider monkeys moved into the Feline/Primate House when an exhibit area opened up. This provided the spider monkeys indoor and outdoor spaces that allowed visitors to see them in any weather. Their old exhibit was renovated for red pandas in 2015.

After all these years the group, with Gumbelina leading the way, still remains an enjoyable and engaging destination for visitors.

Do you have a story about spider monkeys at the zoo? Share your story. Go to “Contact” on this website and leave a message in the drop-down menu to “What is your message regarding?” – “Story Submissions for Zoo Centennial.” Please include the decade or general time frame that applies to your story.