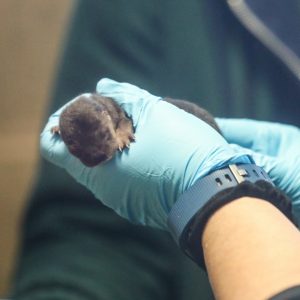 To keep mother and pups comfortable, staff monitors the new family through a camera in the nest box. Although it is very early in their life, so far the babies seem strong and are nursing on a regular basis.

“The zoo staff’s excitement of their birth has to be tempered with the realization that it’s still very early in the life of the otter pups. While Nkeke seems to be doing an excellent job as a mother, she is a first-time mom and is learning as she goes. For most wild mammal babies, the critical period is usually the first month or so of life.  This is where ‘failure to thrive’ is most likely to occur.  Careful monitoring of Nkeke and the pups will continue for quite some time,” said Sarah Pechtel, Potter Park Zoo General Curator. 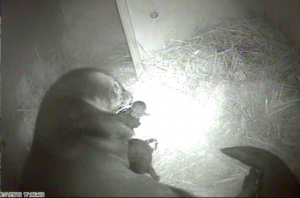 Nkeke arrived at Potter Park Zoo in the fall of 2016 from Roger Williams Zoo in Rhode Island and breeding was first observed between she and Miles the following February. Their introduction and breeding was recommended by the North American River Otter Species Survival Plan (SSP). This SSP, one of many in the Association of Zoos and Aquariums (AZA), is responsible for developing an annual breeding and transfer plan for the species. This plan identifies population management goals and makes recommendations that help ensure the sustainability of a healthy, genetically diverse, and demographically varied population. 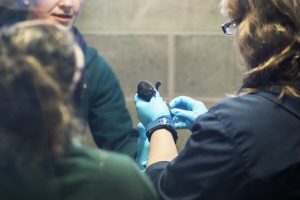 The birth marks a milestone for Potter Park Zoo staff, being the second successful river otter litter in the zoo’s history. Miles, the father of the new pups, was the first otter pup born at the zoo in 2013. The veterinary and animal care team first observed signs of Nkeke possibly being pregnant over the past month, but since the species has delayed implantation, it was very hard to predict if she was pregnant or when a possible due date could be. Delayed implantation occurs when a fertilized egg “floats” in the uterus until a later date.  River otters often delay implantation for as many as 273 days. After the egg has implanted, actual gestation is only about 60 days. Once keepers observed signs of possible pregnancy, veterinary technician Deb Paperd took an x-ray of Nkeke using a non-invasive technique while keepers fed her in a crate. Veterinarian Dr. Sally Nofs, Director of Animal Health at Potter Park Zoo, confirmed the suspected pregnancy after she and Deb noted a clearly defined fetal spinal column on the x-ray. 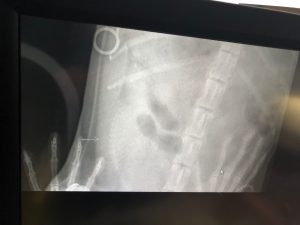 On the pup’s second day of life, Dr. Nofs performed their first neonatal wellness exam. This quick physical exam is necessary as it allows veterinary staff and keepers to check for any abnormalities or injuries and to get a body weight for a baseline. 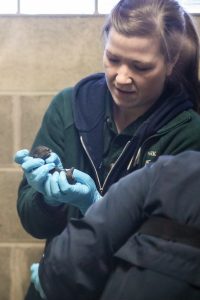 “We keep the exam as brief as possible to avoid interrupting the maternal bond with the offspring from the stress of separation. These two otter pups look normal and healthy so were promptly placed back into the nest box and mom returned in a matter of a few minutes.   We can continue to monitor their health and wellness with regular body weights to monitor growth as well as observations via nest box camera that show nursing and maternal care,” said Dr. Nofs.

Though a first time mother, so far Nkeke is a natural and is calmly attending to her motherly duties. She will spend most of her time in the nest box with her pups for the first month of their lives. The pups were born with fur on their bodies and their eyes closed. Their eyes will open around 10 days old. Otter pups are not born knowing how to swim but will begin swimming lessons around 28 days. Zoo visitors will be able to see father Miles on exhibit, but won’t be able to see Nkeke or the pups for the next few months. Follow Potter Park Zoo on social media and on their blog for regular updates on the new otter family.