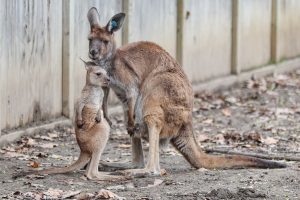 Western grey kangaroo Gertie is officially a new mom! According to the Potter Park Zoo animal care team, her young joey now venturing out of his pouch. Zoo staff first noticed movement in her pouch in late 2018 and kept a close eye on her over the winter months.

Baby kangaroos are the size of a lima bean at birth. They climb up their mother’s belly and into her pouch as soon as they’re born to finish developing. By the time the joey is ready to start venturing from the safety of the pouch, it has grown to be a couple of feet tall.

In late March, zookeeper Amy had the first look at the little joey with its head out of mom’s pouch. Since then, zookeepers and staff have been anxiously waiting for it to venture out of the pouch. This week they saw the joey outside of the pouch for the first time.

Though still spending a lot of time hanging out in the pouch, the little guy or gal is starting to move around the exhibit on its own two feet and tail. Visitors who are patient may see the joey climbing all the way out of the pouch, reaching for his mom’s food and beginning to with mother Gertie and the other kangaroos.

“We are looking forward to a great season at Potter Park Zoo and we know Gertie the western grey kangaroo and new joey will be a part of that,” said General Curator Sarah Pechtel.

All of the kangaroo at Potter Park Zoo are part of the Species Survival Plan (SSP) of the Association of Zoos and Aquariums. There are over 170 SSP’s that, throughout the accredited zoo community, work to maintain healthy and genetically diverse populations of animals. 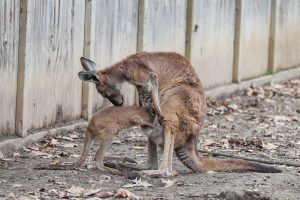 The joey goes back into mom Gertie’s pouch. 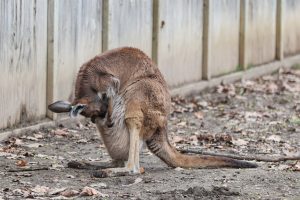 If guests are patient, you may catch a glimpse of the new joey out of mom’s pouch. 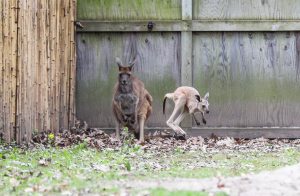 The joey tests out its powerful legs while hopping around the kangaroo exhibit. 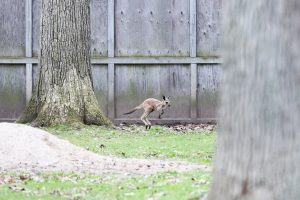 For now, the baby is taking short laps and staying close to mom as it gains confidence. 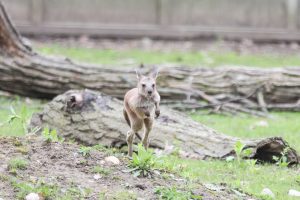 The joey is fast! If you’re lucky, you’ll see him zipping around the kangaroo exhibit. 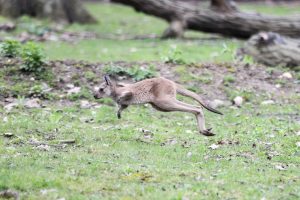