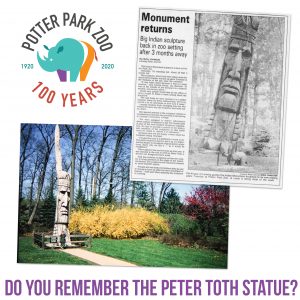 For many years there was a large statue of a Native American in Potter Park. It was carved in 1975 and widely known at the time as the Indian Statue, or Whispering Giant, as it was officially known. It was a landmark in the park and later in the zoo itself. It was a photo op for countless visitors that many remember fondly.

The statue was created by Peter Toth, a Hungarian-born sculptor whose family had fled the Russian military and settled in the United State in the late 1950s. Through his family’s struggles, he felt a kinship with the Native American. He traveled the country for 30 years, producing a collection known as the Trail of Whispering Giants as his gift to America and a way to honor Native Americans.  He made at least one statue in each state. Each represented a mix of physical characteristics and histories of local native tribes.

Toth’s Lansing stop was his 15th “Giant.”  He reportedly spent three months camped out in the park while he worked. The result was hammered and chiseled out of an elm tree and stood almost 30 feet tall. Some visitors came specifically looking for our #15.

Initially, the statue was found in the park. In 1993 it was relocated inside the zoo entrance to a more secure spot. In 2003 Toth returned to repair damage caused by Michigan weather and termites. By 2012 the sculpture was beyond repair and had to be removed.

In 1988 the Lansing State Journal reported on a Lansing couple visiting Hawaii.  They spotted Toth carving a familiar-looking statue.  When the artist was asked about the Lansing statue, he reportedly replied, “Oh yeah, there’s a zoo there.”

Do you have a story about the Native American Statue at the zoo? Share your story. Go to “Contact” on this website and leave a message in the drop-down menu to “What is your message regarding?” – “Story Submissions for Zoo Centennial.” Please include the decade or general time frame that applies to your story