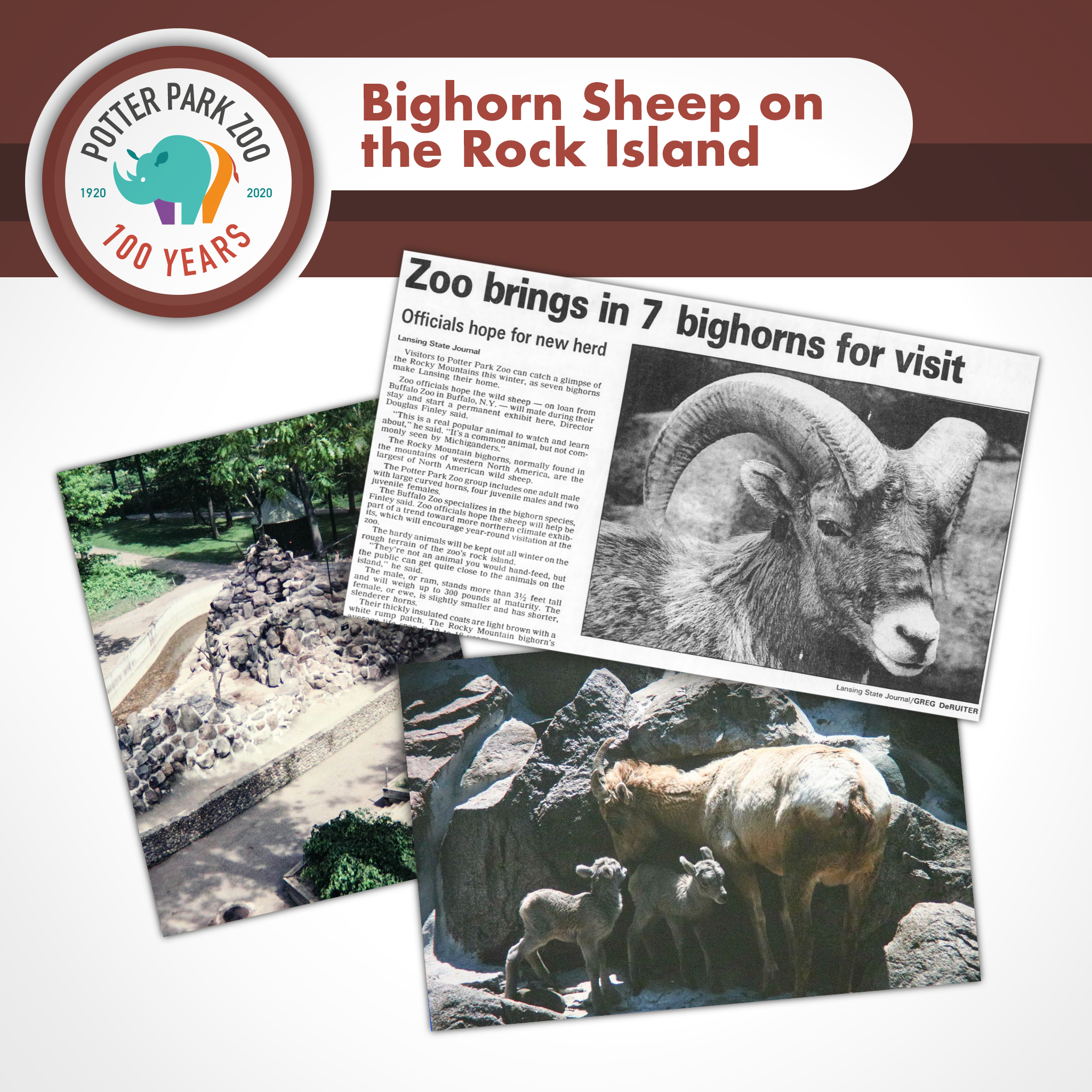 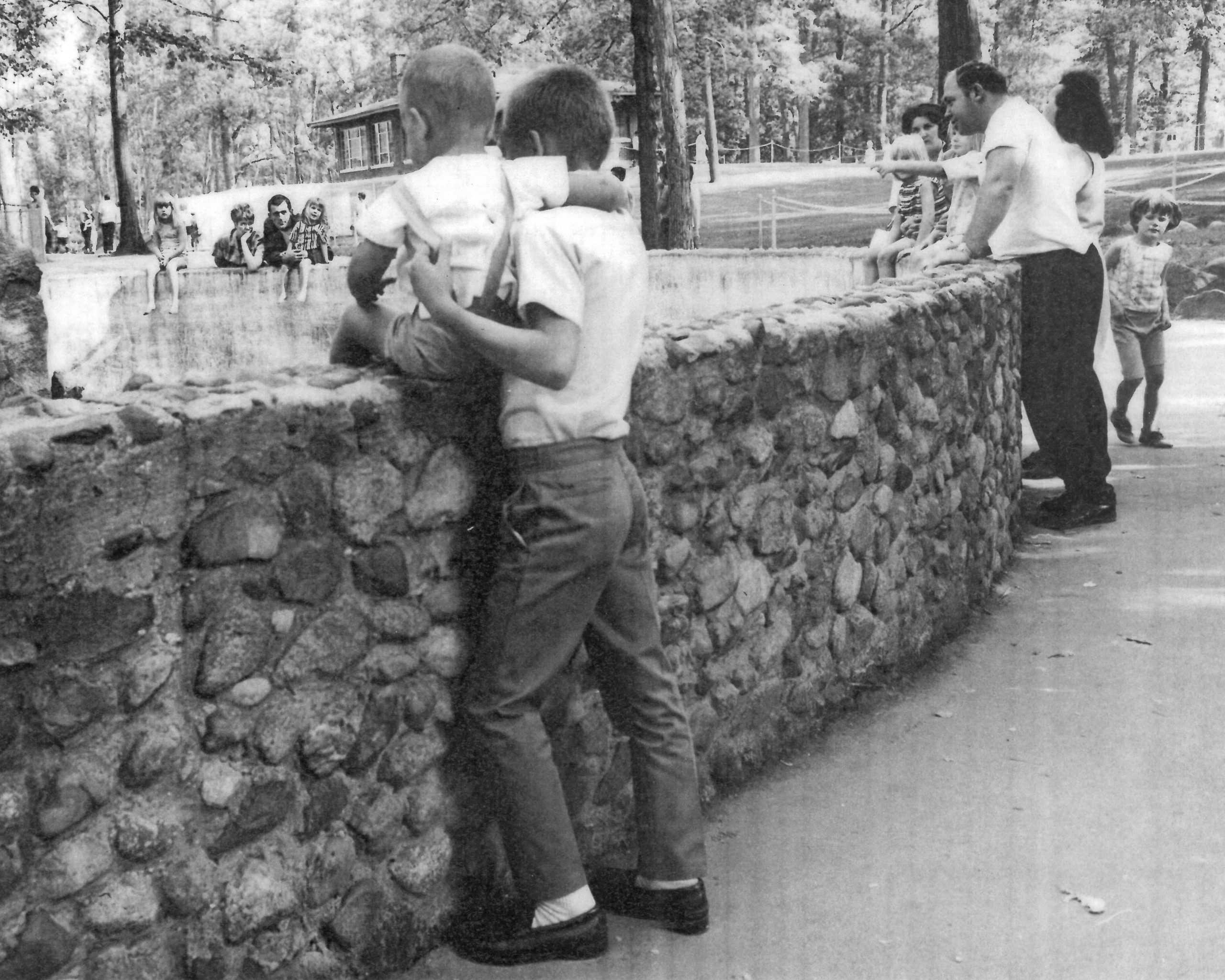 Potter Park’s rock island was built in 1936 under the Works Progress Administration (WPA) –a program instituted by President Franklin Roosevelts to create work and lift the country out of its Depression. Many animals would occupy this space over the years, including a variety of monkey species which summered on the island and wintered in the Lion House.  In the 1950s, the monkeys were joined by aoudads, (also known as Barbary sheep, native to the mountains of North Africa) which were active in their enclosure year-round. In 1987, the spider monkeys left the island for their new exhibit in front of the Lion House, and a new species took ownership of the rock island – the Rocky Mountain bighorn sheep. 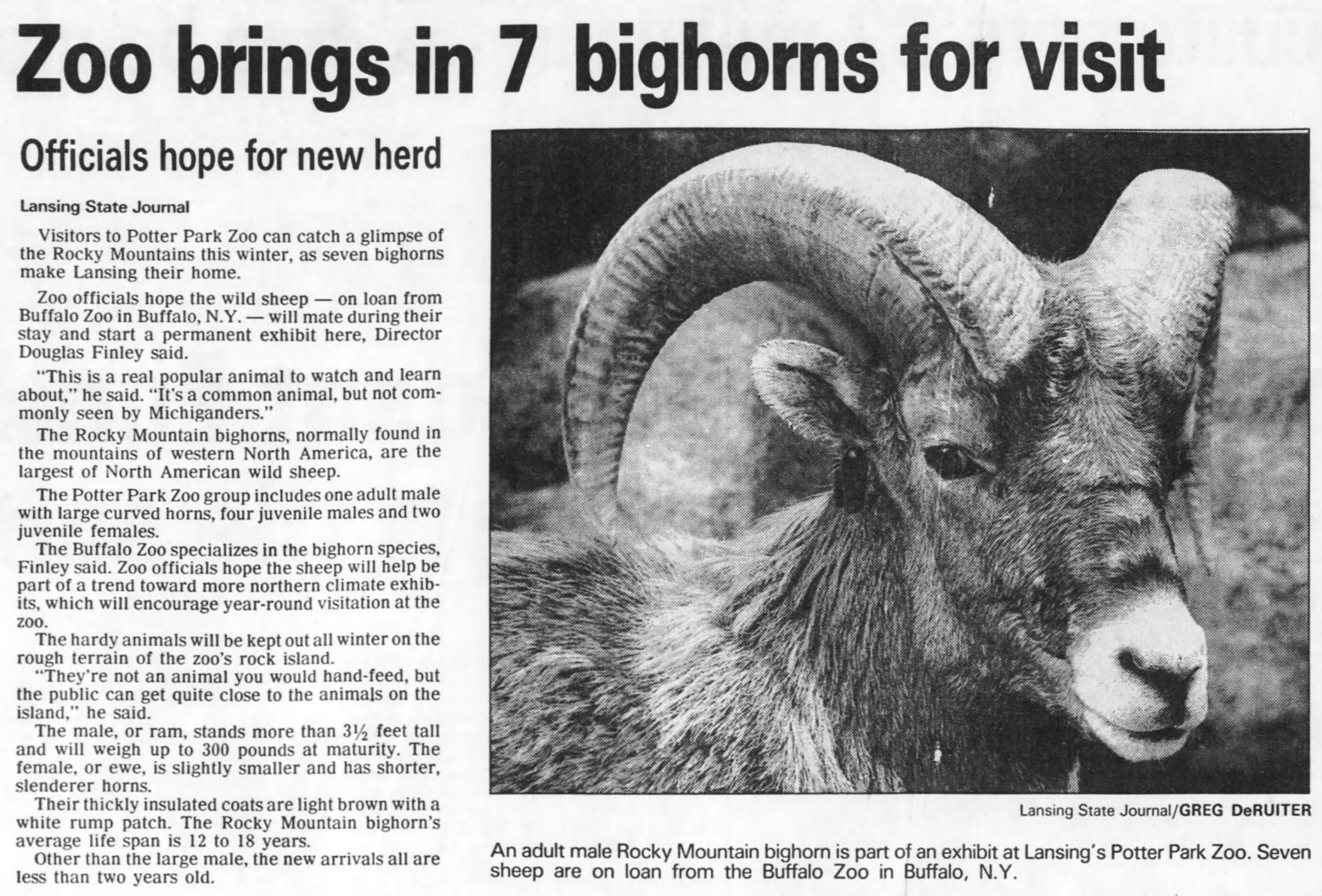 Rocky mountain bighorn sheep are the largest wild sheep in North America. Males (also known as rams) are easily recognized by their large, curling horns, while females sport smaller curved horns, and are about half the male’s body size. With specially adapted hooves, strong legs, and an excellent sense of balance, bighorn sheep are well suited to their wild mountainous habitat, which was mimicked by the rough terrain of the zoo’s rock island. The exhibit was viewable from all angles, providing numerous photo opportunities and an unobstructed view of bighorn activity. 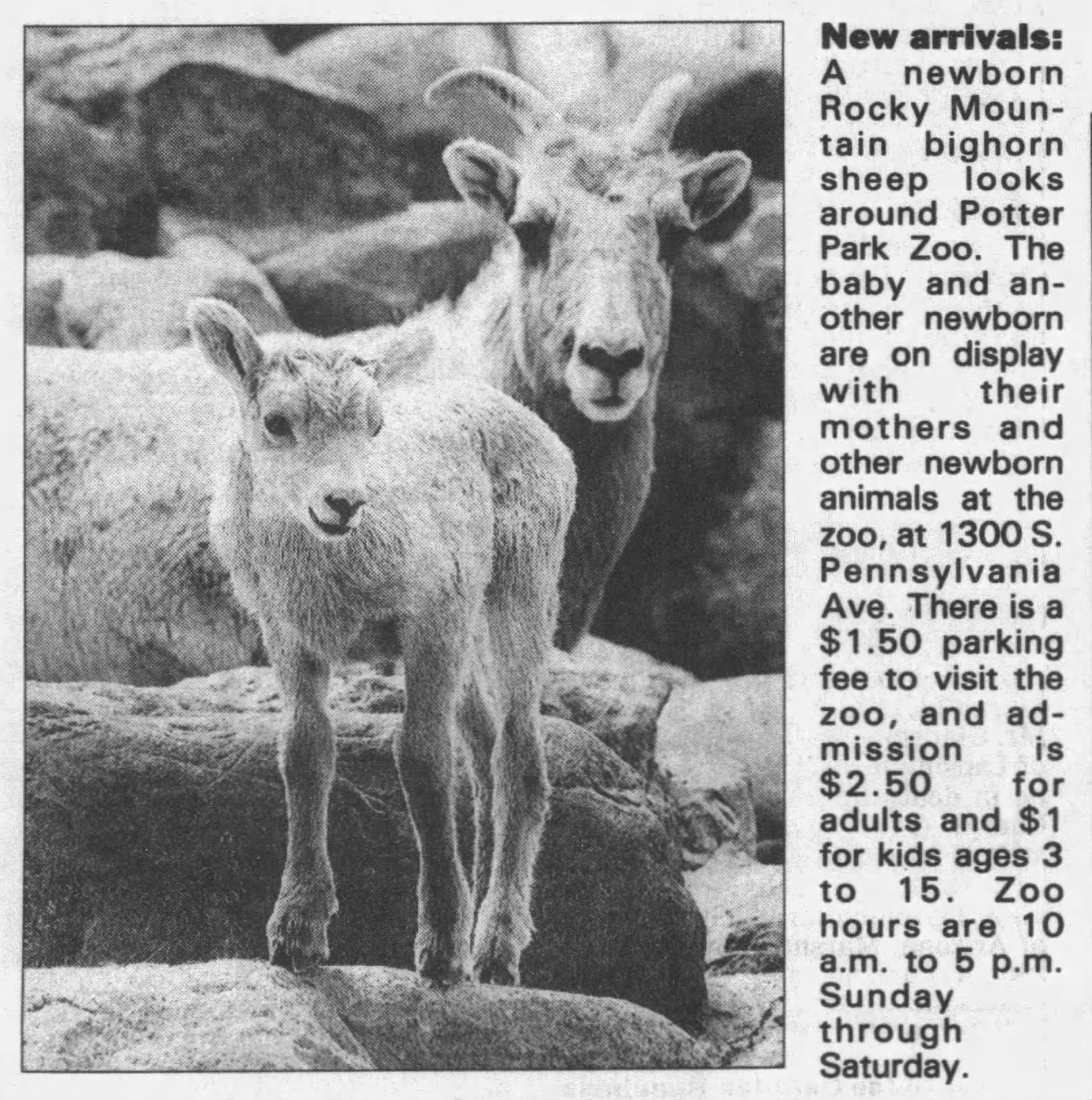 The Rocky Mountain bighorn sheep would reside on the rock island from 1989 to 2010. The first group of seven – all young – arrived in 1989 from the Buffalo Zoo. As the group matured, some left for other locations, and by 1991 a breeding group of three remained:  Otto, Maxine, and Ruby. Typically, each of the females produced a calf each spring.

The calves were usually born on exhibit in April or May. They were up and active very soon after birth and demonstrated amazing agility and sure-footedness as they negotiated their rocky habitat. Their coats blended in perfectly with the color of the rocks, and visitors sometimes needed a second look to spot them. Most of the young left for another location by two years of age. This cycle continued for many years. Otto passed away in 2003 at almost 15 years of age, followed by Maxine in 2007 at 18 years and Ruby in 2008 at almost 20 years. 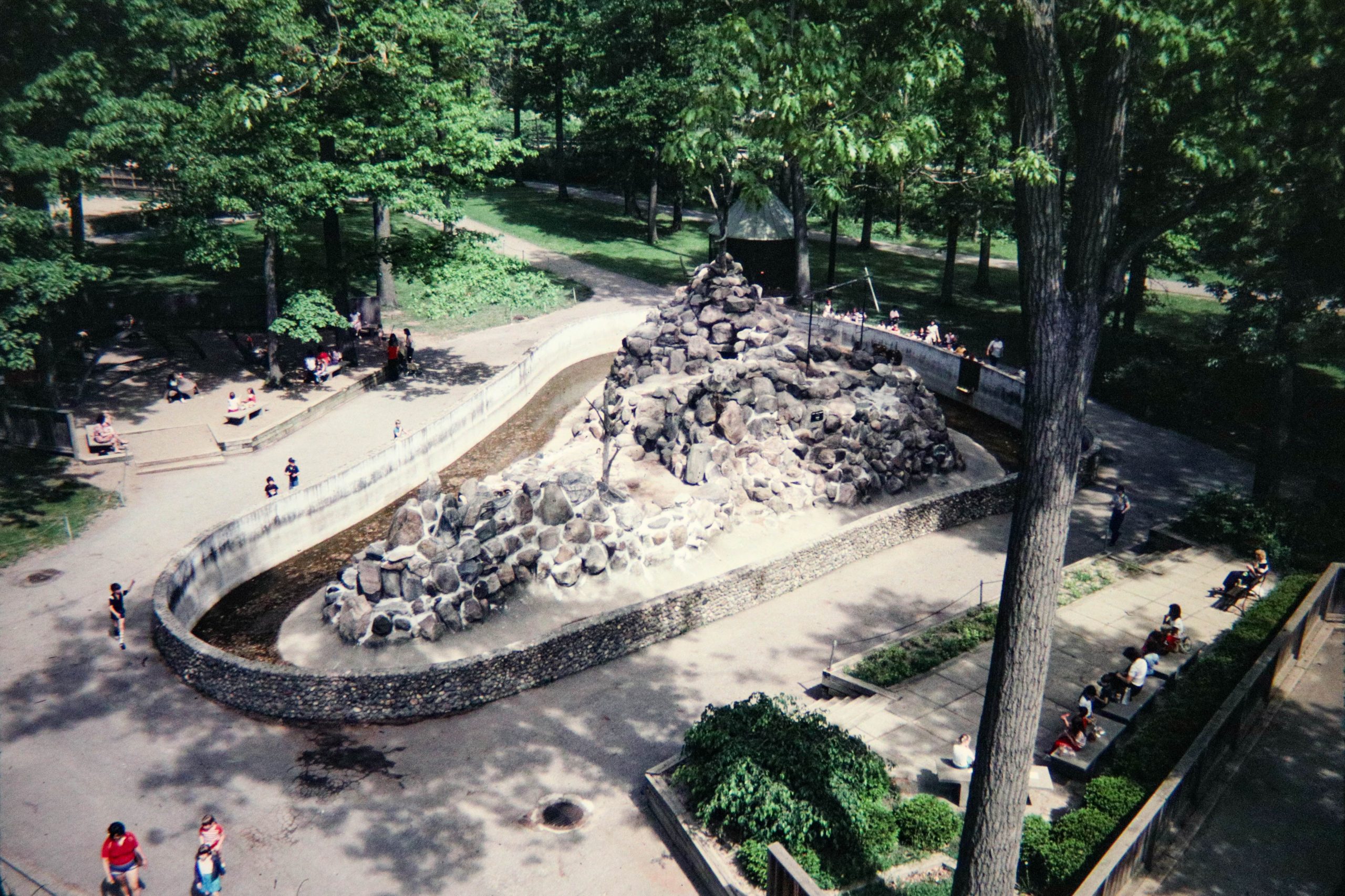 Bighorn sheep aside, the rock island had its quirks. The central structure was surrounded by a dry moat, which had been drained following the monkey’s relocation. To clean and feed the animals, zookeepers would enter through the back of the exhibit via a pull-out drawbridge. At the drawbridge access was a door leading under the rocky structure where the animals could feed and seek shelter from the elements if they desired. In order to clean the exhibit, the zookeepers used a large heavy hose while balancing on rocks.

In 2009 a new male arrived and bred with one of the previous offspring born in 2003. A new calf arrived in 2010 and would be the very last of the bighorn era. After more than 70 years, the steel framework supporting the rocks had deteriorated, and the structure was deemed unsafe for the animals and the humans who cared for them. The cost for repairs was high, and the zoo chose to retire the exhibit instead. The sheep were sent off to other facilities, and the exhibit was demolished in 2011. Large boulders were recycled, and what could not be reused was toppled over and covered to become the Green Space – now a gathering area for visitors and venue for special events.

Do you have a story about the rock island or its inhabitants? Share your story. Go to “Contact” on this website and leave a message in the drop-down menu to “What is your message regarding?” – “Story Submissions for Zoo Centennial.” Please include the decade or general time frame that applies to your story.