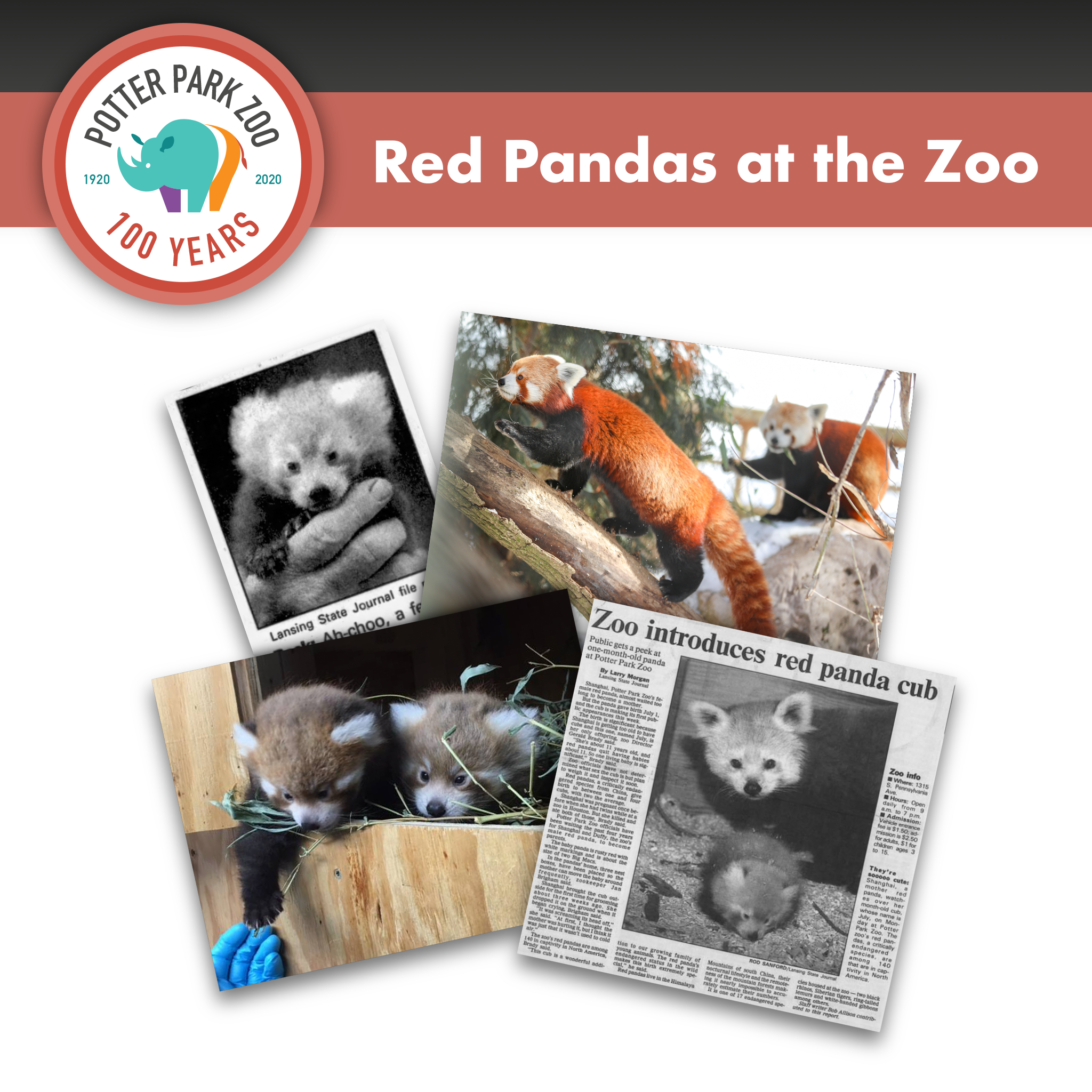 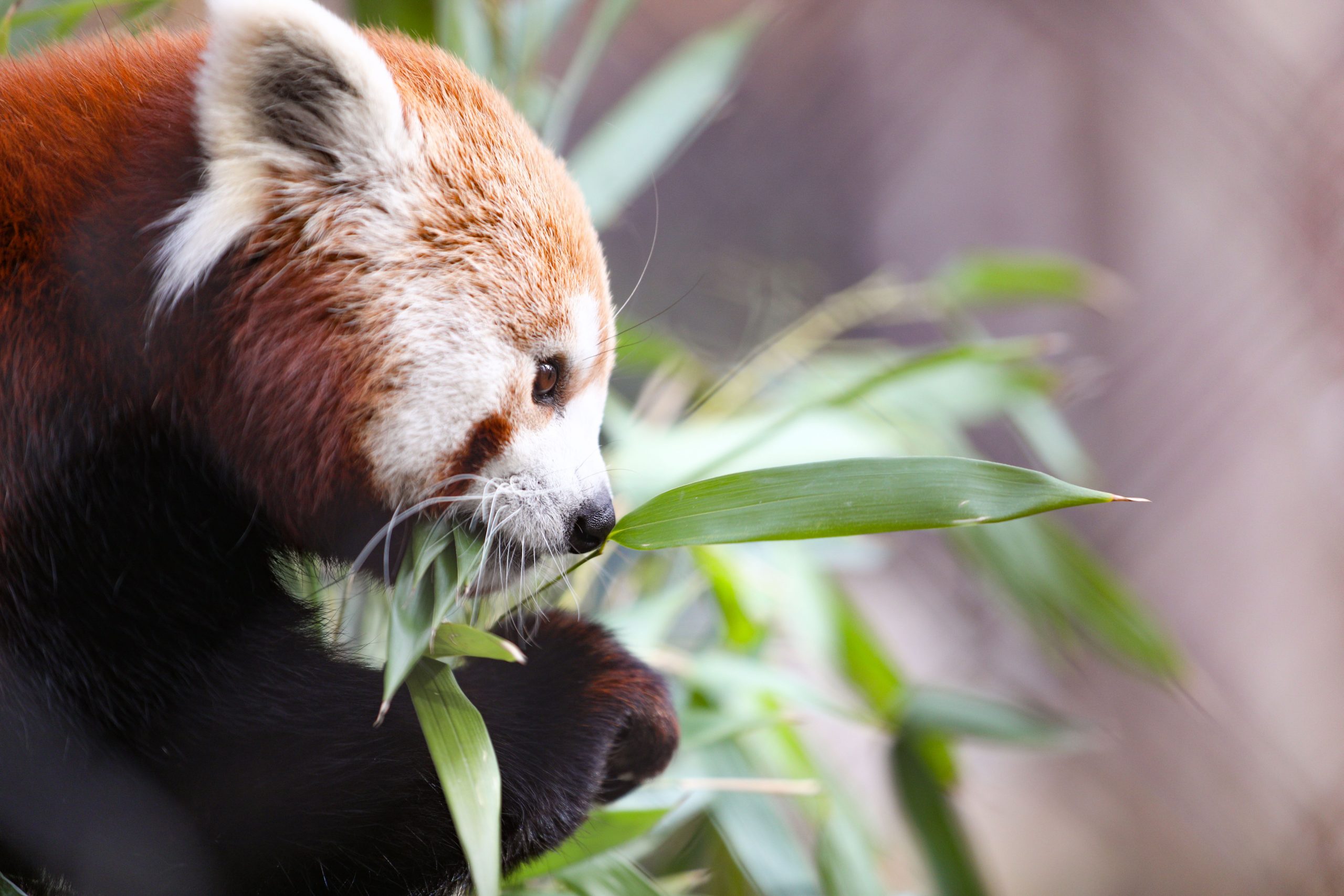 Red pandas have a charming appearance that is difficult to deny, and make compelling ambassadors in the zoo’s conservation efforts to breed endangered animals. This unusual species first arrived at Potter Park Zoo in 1990, and took up residence in the yard across from the snow leopards (now the Pallas cat exhibit). Many visitors had never seen or heard of this creature, which continues to be overshadowed by the more popular black-and-white giant panda. Despite their relative obscurity, reports describing the red panda were first published in the Western world in 1825, almost half a century before the giant panda was known. For a time, certain similarities led scientists to believe the two were related. Both species’ diets consisted primarily of bamboo, which is reflected in certain behavioral and physical adaptations. The name “panda” itself is a Nepalese word which translates roughly to “bamboo footed.” Using DNA analysis, however, scientists discovered that the red panda belongs to its own unique family, of which it is the only surviving member. Unlike the giant panda, the red panda is not a bear.

In the last fifty years, red pandas have become more common in zoos due to an increase in the success rate of captive breeding. As the presence of this beautiful but endangered species grows, so too does the public awareness of threats they face in the wild. Deforestation in their East-Himalayan habitat is a primary concern, and current population estimates rest at less than 10,000. 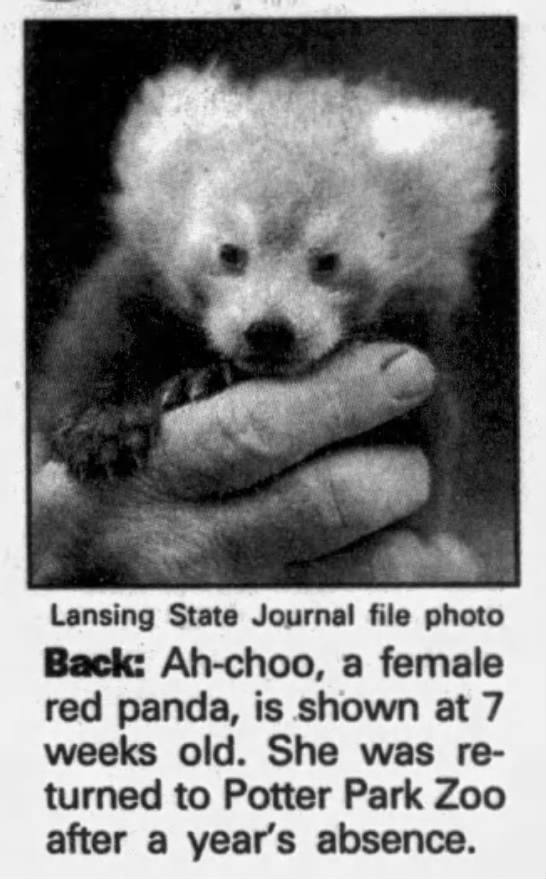 Potter Park Zoo’s red pandas were matched according to the Species Survival Plan (SSP) which makes breeding recommendations for zoos certified by the Association of Zoos and Aquariums (AZA). Pairing decisions are made with an eye towards genetic diversity and long-term health of the population. With the help of the AZA, “July” became Potter Park’s first successful red panda birth in 1995. She was raised by her mother and later transferred to the Detroit Zoo.

Another red panda – Ah-choo – was born in 2000. She had to be hand raised, and was  moved to Binder Park Zoo to join another baby in their nursery (an effort is made to keep young red pandas together as they learn and grow). When the second baby died, Ah-choo was relocated to the Knoxville Zoo, which is known for its success in hand rearing. Ah-choo made a happy return to Potter Park in 2001, where she was joined by two female playmates. Rupert – a young and very active male – was introduced in 2004 as a potential mate. Sadly, Ah-choo passed away in 2005, and Rupert was relocated to  the Detroit Zoo. 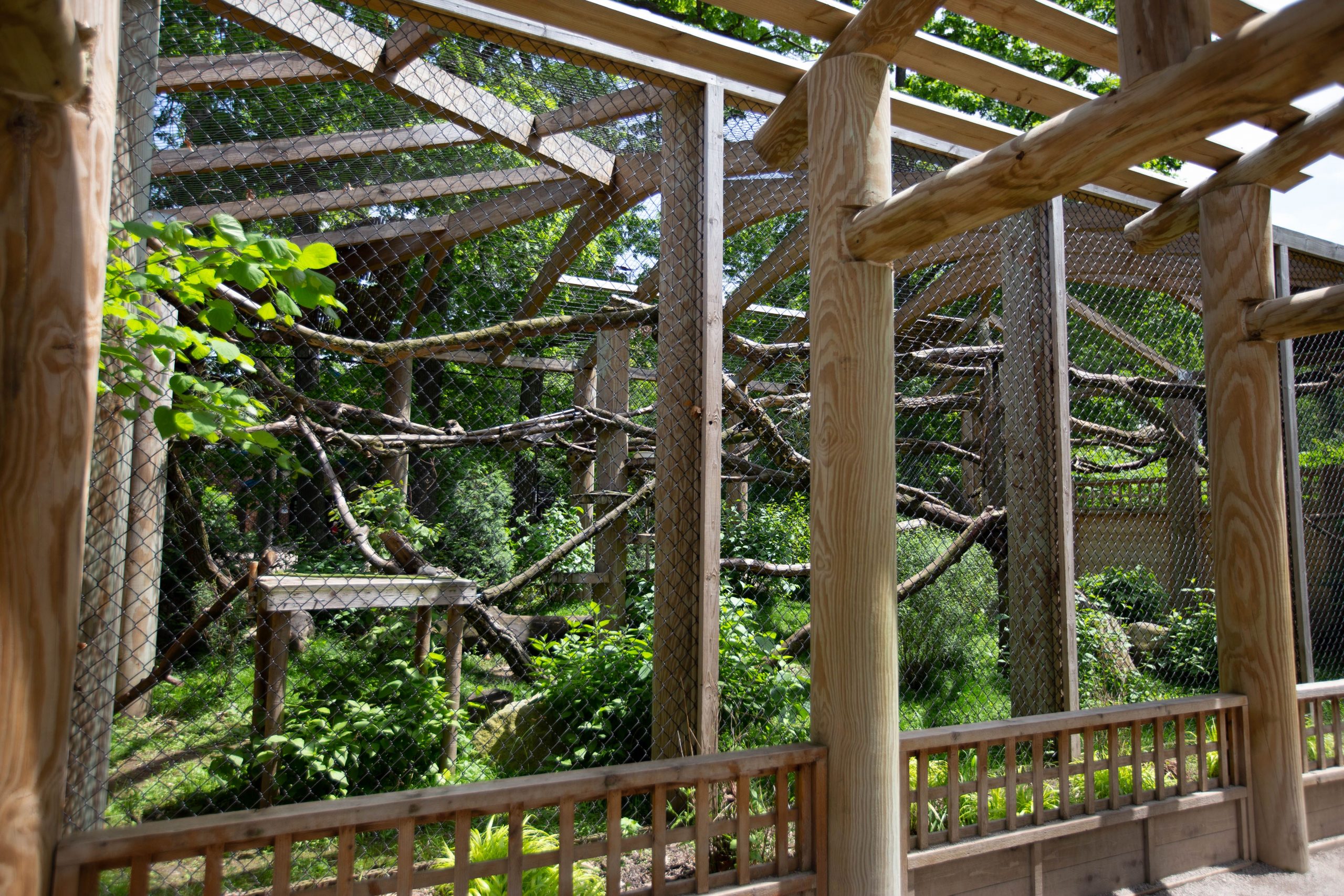 In the following decade, two more red pandas would come to Potter Park. The first, Rupert Jr, was born at the Detroit Zoo in 2014 to the aforementioned male Rupert. The second, Maliha, was born at the Fort Wayne Children’s Zoo in 2015. These arrivals brought renewed hopes for babies, and coincided with plans for a new exhibit. The old spider monkey enclosure was now available, and a major renovation was undertaken to better fit the red pandas’ needs. Important elements included more space, higher branches, and a dedicated maternity room, providing privacy and choice of nest boxes.

Animal care staff worked closely with zoo maintenance crew to make the transformation possible. A zookeeper involved reflects on the process: “Building the new exhibit for red pandas was a great experience. While the building was a repurposed building, the outdoor exhibit was rebuilt from scratch. We got to choose everything from the height, to the placement of every branch, and the contour of the exhibit floor. The whole team was involved and very proud of how it turned out. The architect involved even received an award for its design. In return for all the research and sweat and tears (only a few) that went into this project, the pandas have used every part of that exhibit and we have had a successful set of cubs.” 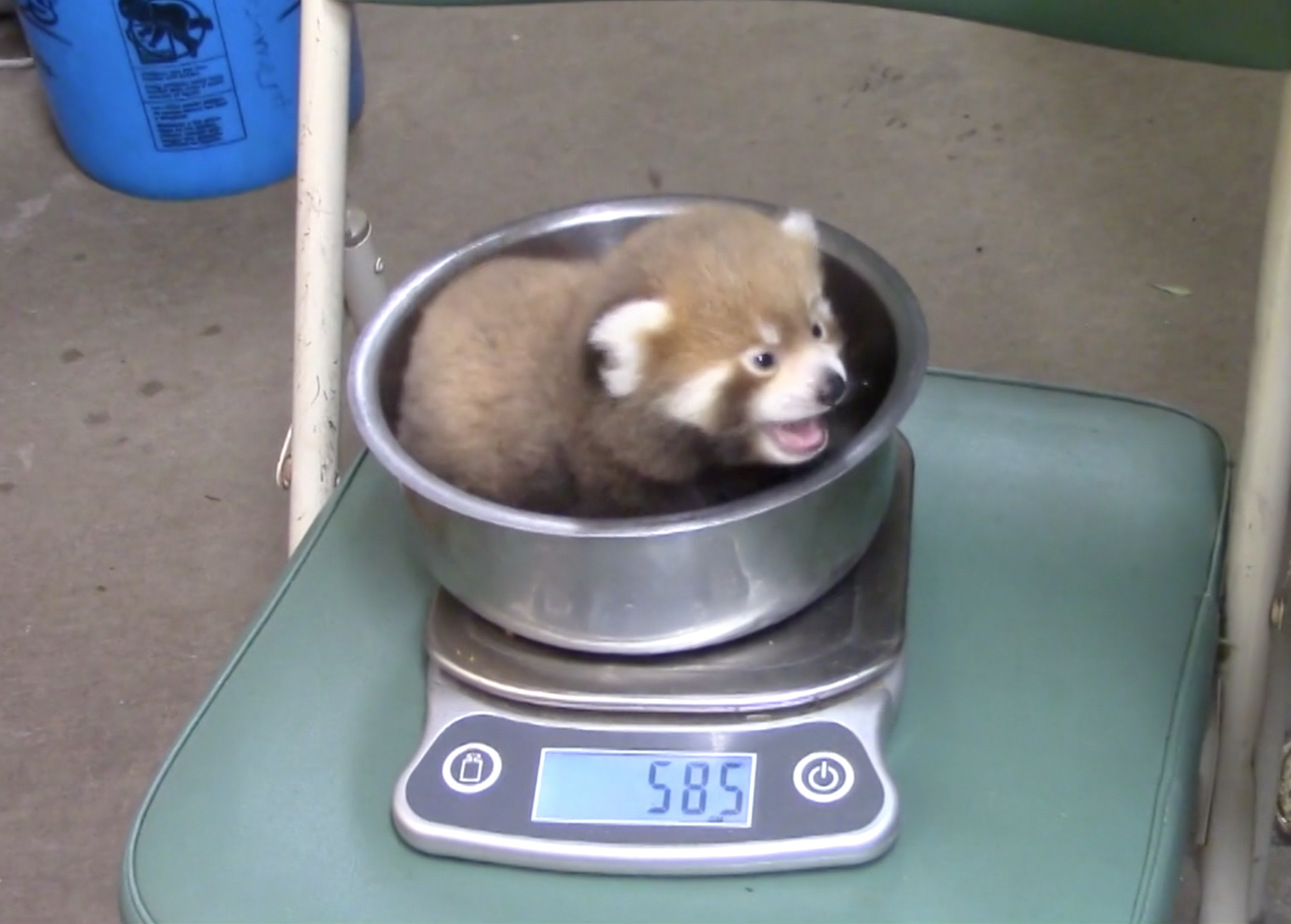 Maliha, a first-time mom, gave birth to a boy Pabu and a girl Roji in 2016, and provided exceptional care. NBCNews covered the story. Within a year it was time for the cubs to move on to the Capron Zoo in Attleboro, Massachusetts. The SSP for red pandas decided to switch males for future breeding, and Rupert Jr left in exchange for male Doofah. A subsequent exchange this year has seen Doofah off to a different zoo, and provided Miliha with another partner. We hope to meet him soon and watch our red panda family grow once more.

Do you have a story about red pandas at the zoo? Share your story. Click here and in the drop-down on this page that says “What is your message regarding?” and select “Story Submissions for Zoo Centennial.” Please include the decade or general time frame that applies to your story.