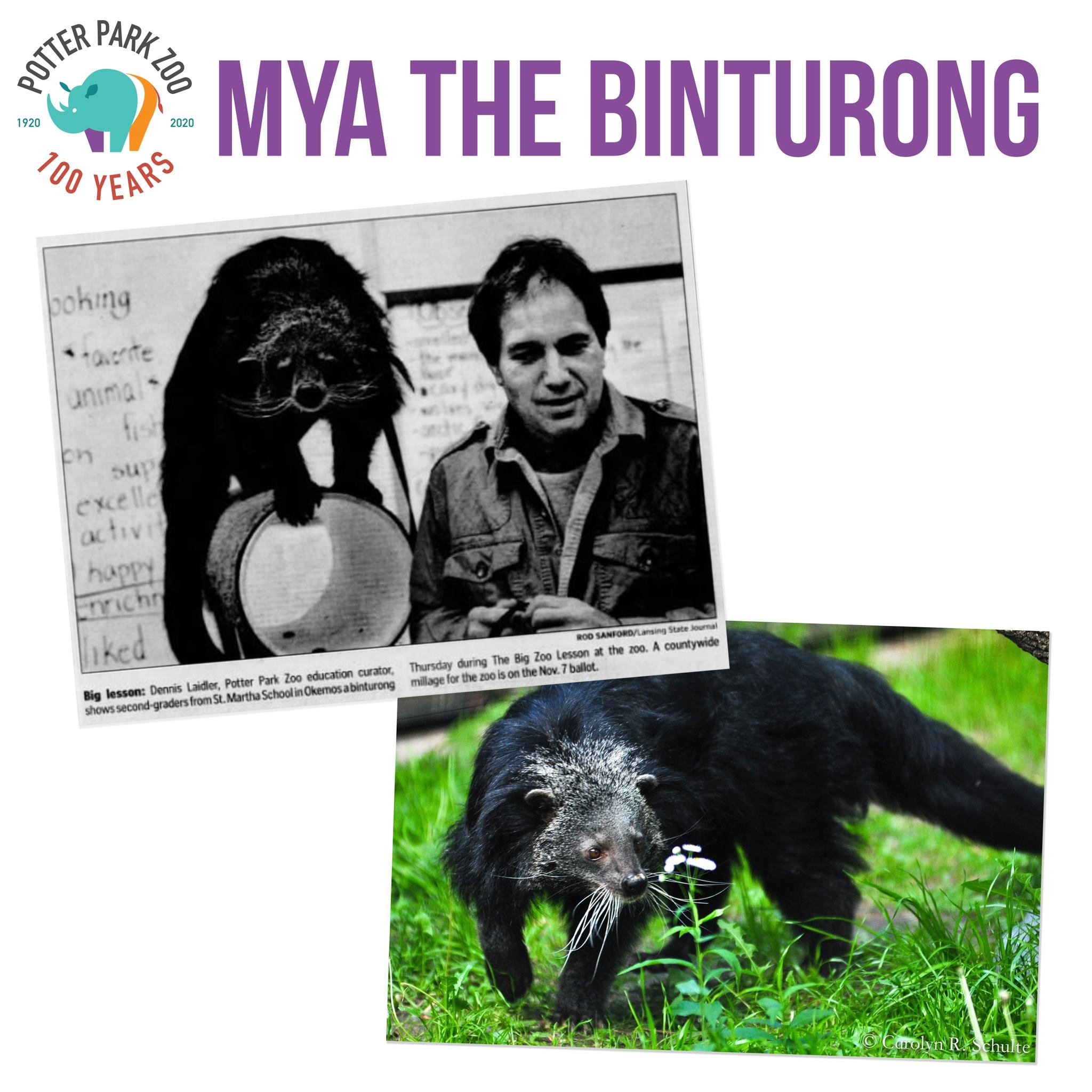 Mya the binturong was a popular ambassador animal born at Potter Park Zoo and used in education programs at the zoo and in the community. Teamed with her handler, this unique animal provided engaging learning experiences and raised the awareness of her unusual and fascinating species.

Many visitors have never seen or even heard of binturongs. They are also known as “bear cats” because they look like a bear and a cat, although they are neither. They are classified as carnivores, but primarily eat fruit. These arboreal creatures have a long, prehensile tail, which provides balance when climbing in the rainforests of Southeast Asia, where they live. And they emit an odor similar to stale popcorn.

The first binturongs at the zoo were two young males: Ben and Henry, each arriving from a different zoo in 1993. They lived in one of the moat open-air exhibits in front of the bird and reptile building that came outfitted with an artificial tree for climbing. There was an off-exhibit indoor area for cold weather.

By 1998 it was time for Ben to be paired with a female for breeding. Henry left, and Panama, a three-year-old female, arrived as a match for Ben. They reproduced four times in the next three years with varying success.

Mya and her sister constituted the last litter, in 2001. They were discovered on the ground by the zookeeper, ignored by mom. They were warmed up and seen by the veterinarian.  Since they had to be hand reared, the vet and education curator decided to try to raise one of the babies to be an ambassador animal for future use in education presentations. One was selected and named Mya, as in Myanmar, one of the countries where binturongs live. The other sister was sent to the Fort Worth Zoo in Texas to be hand raised and trained for education purposes as well.

When Mya was strong enough, she was moved to the Discovery Center animal quarters, where ambassador animals lived. Keepers provided most of her care, but the education curator became her primary handler. Mya was always pretty responsive to attention and food treats, and she had a very trusting relationship with her handler. With those qualities and consistency in training, she proved to be a good student, learning behaviors and routines that would serve her well in her husbandry and medical care as well as her role in education.

Mya was an extremely appealing ambassador animal. She was an attention grabber with her unique looks and interesting adaptations. She demonstrated her incredible balance by standing on her hind feet atop her demonstration perch and also used her prehensile tail to wrap around it. Many people learned from her over the years. 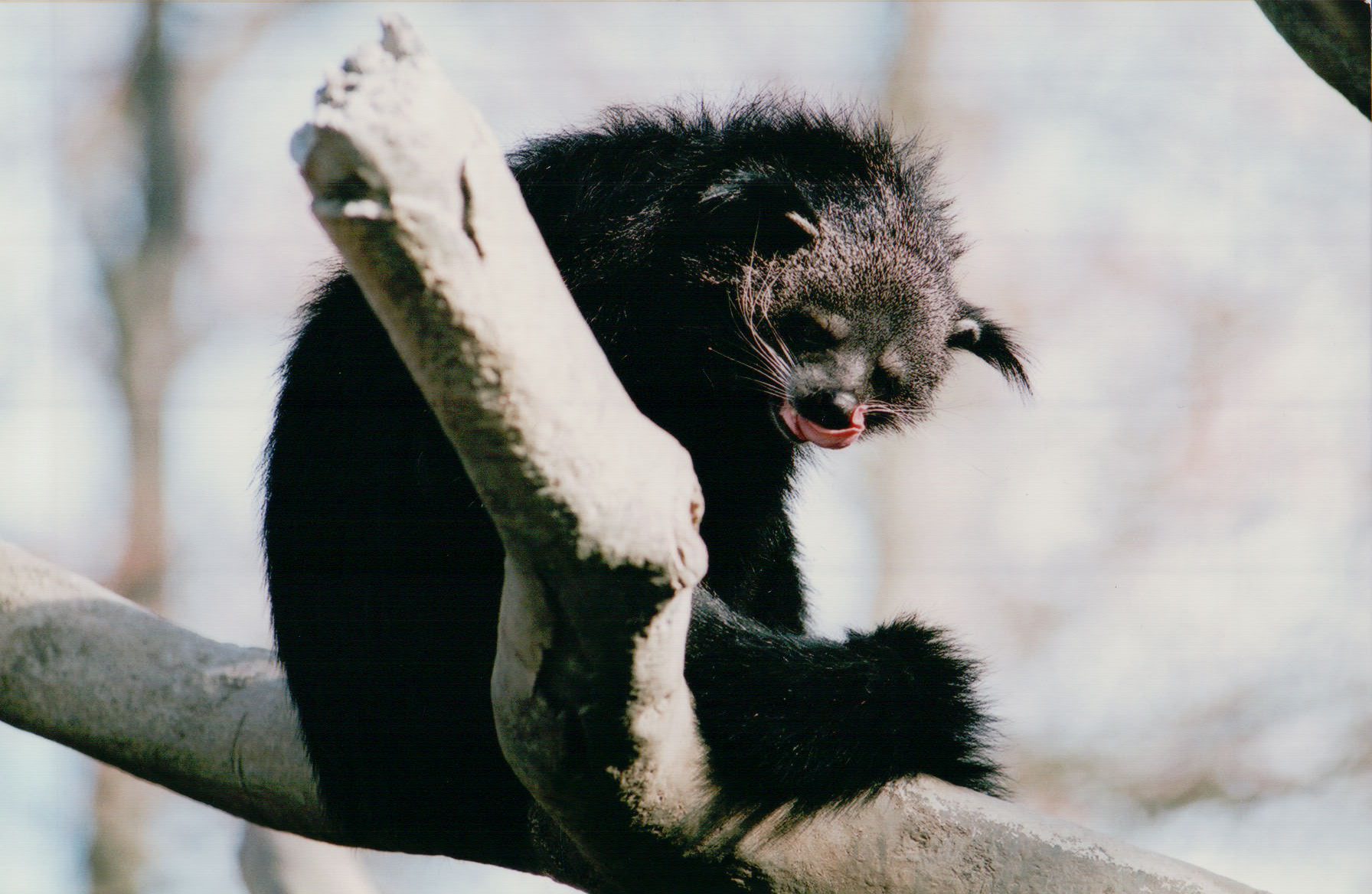 When Mya was around seven or eight years old, she had a medical crisis that was diagnosed as diabetes by the zoo’s veterinarian. Mya needed insulin injections. Her handler was able to give her the shots because of their solid training relationship. Eventually, he was able to train her to position her body in the enclosure so that her keepers could do it. Over time, her insulin was reduced. Through some research and conversations with other zoos with diabetic binturongs, staff was able to manage her diabetes with just diet.

When Mya was around ten, the decision was made to shift her from an ambassador animal to an exhibit animal. She was moved to the large meshed enclosure in the center of the Feline/Primate Building. She had a lot of space, and the staff assembled a wonderful set of climbing logs, giant PVC tubes, and hammocks to suit her arboreal preferences. It was an engaging environment for her and provided visitors with good viewing opportunities.

Around 2013, the vet discovered further health issues.  She was humanely euthanized at the age of 13. She has been missed.

Mya’s story is a testament to a unique relationship between an animal and a human. Her handler has these words to share about her, “I have had the great fortune to work with hundreds of different animals over my career, and Mya is one that stands out as one of the most special.”

Do you have a story about Mya or the other binturongs at the zoo? Share your story. Go to “Contact” on this website and leave a message in the drop-down menu to “What is your message regarding?” – “Story Submissions for Zoo Centennial.” Please include the decade or general time frame that applies to your story.