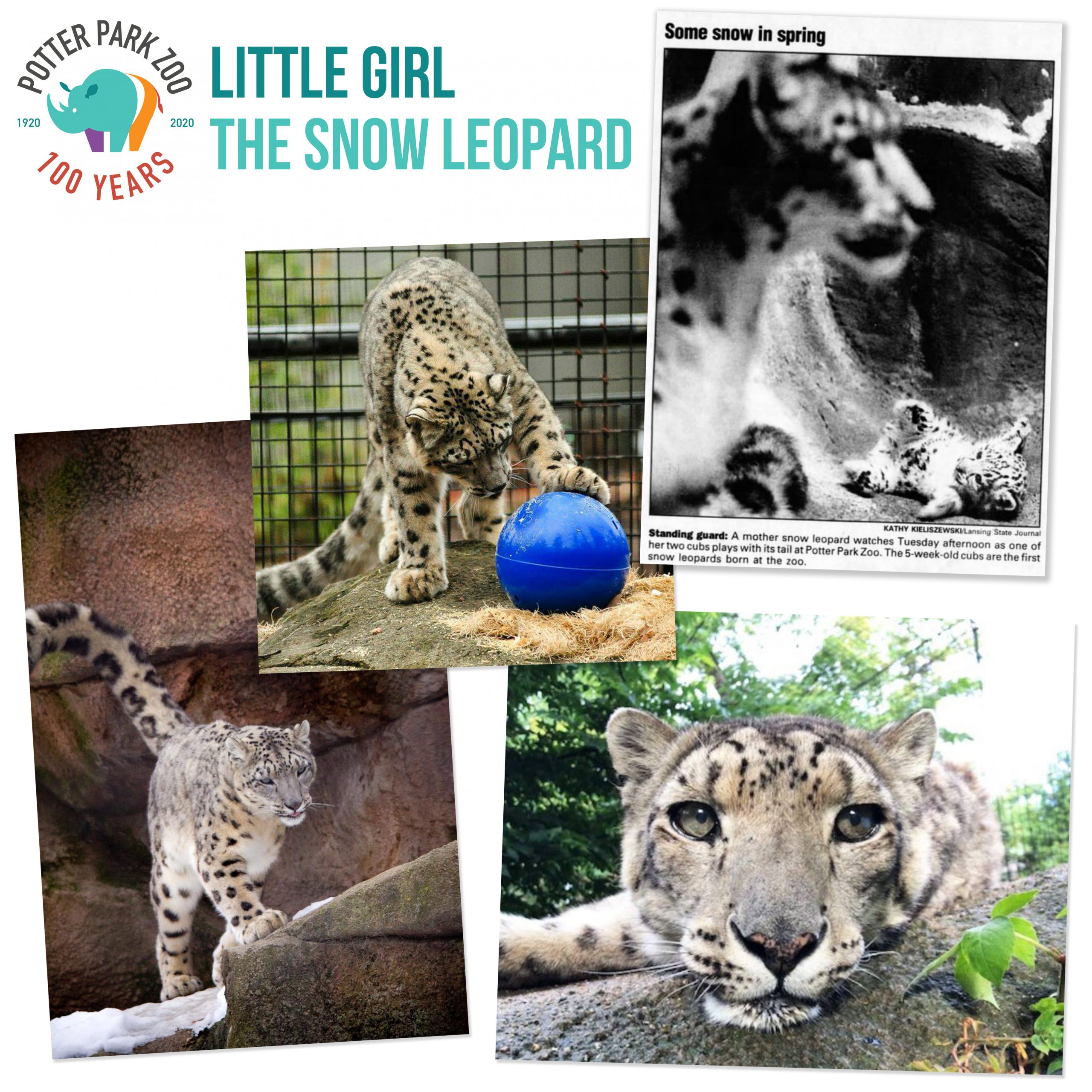 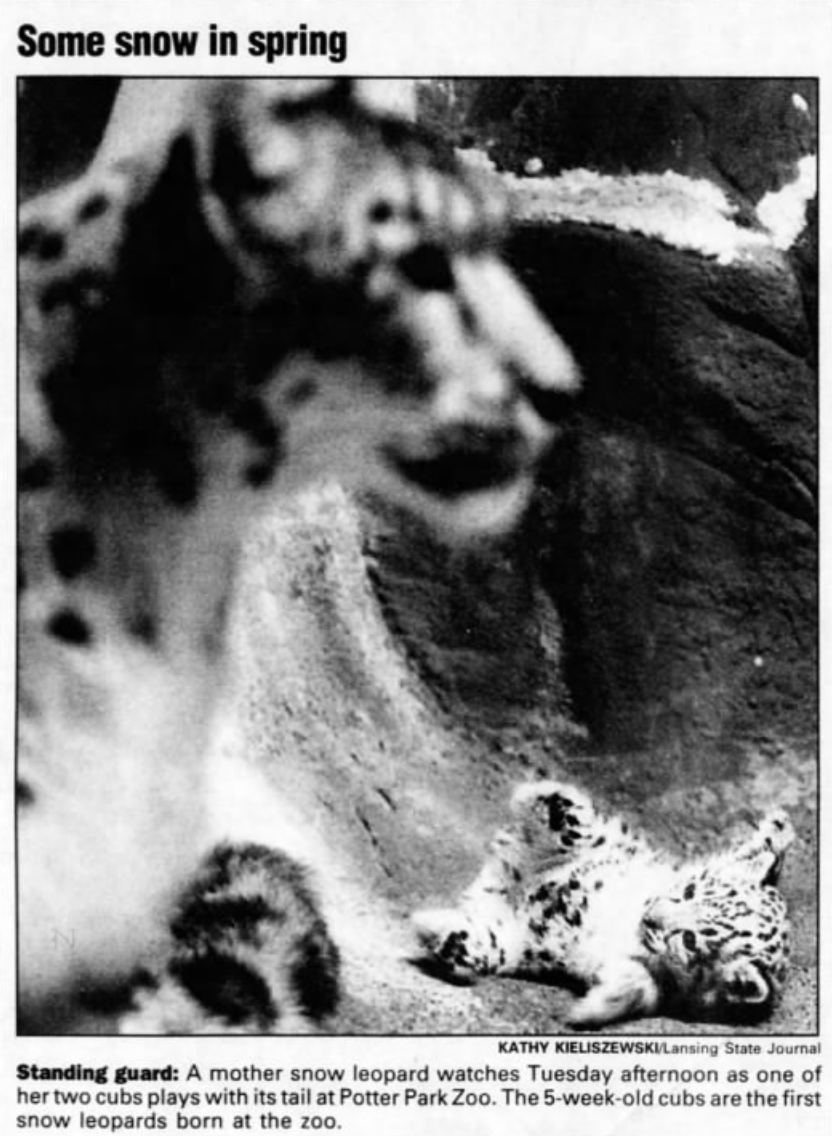 Lansing State Journal photo from 1998 when Little Girl was born.

Little Girl the snow leopard was born at Potter Park Zoo and lived her whole life here. She was known for her beauty, longevity, and amazing repertoire of trained behaviors that helped staff provide exceptional care of her.

Little Girl was born in 1998 with her brother, Moon Shadow, to mother, Judee, and father, Genghis Khan. Mom and the cubs stayed together for a few years. Moon Shadow was the first to leave for another zoo in 2001. Judee left in 2004 and dad passed away in 1998 soon after the cubs were born. Since snow leopards are normally solitary except for breeding and moms with young, he would not have helped with the cubs’ upbringing. Note: For years he continued to educate through his skeleton on exhibit in the Discovery Center and his pelt used for education.

Little Girl got her name because zookeepers expected her to move on to another zoo when she was old enough, and they wanted the receiving zoo to be able to name her. She never left and remained known to everyone at the zoo as Little Girl. Sometimes a newspaper article would use her “media name,” Serena.

The zookeepers began training Little Girl in 2005 in order to facilitate husbandry and medical care, and to provide mental stimulation. They used positive reinforcement techniques, that is, rewarding her with favored food items for desired behaviors. She was a real pioneer at Potter Park, and training efforts were very successful. What made her so good? Having been born here she was very comfortable and confident in her exhibit. Also, she was very food motivated. In particular, she LOVED chicken, so keepers had a reward that she enjoyed working for. 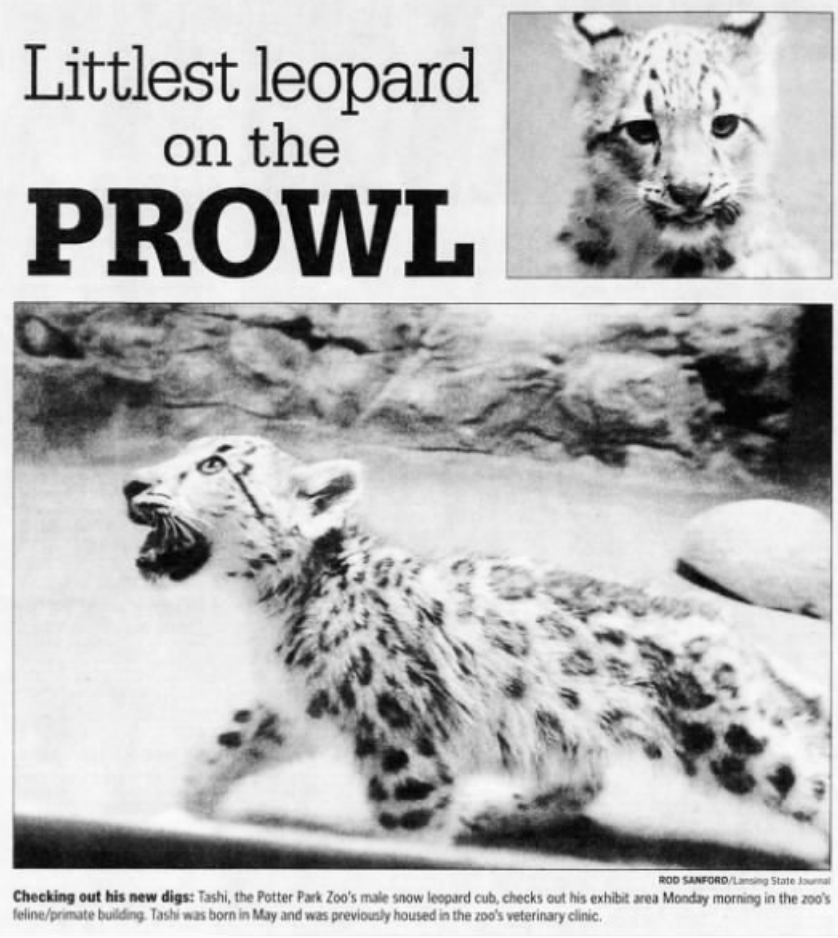 Her training allowed keepers to monitor her health with her participating voluntarily. This was much less stressful for her than being put under anesthetic. Animal care staff were able to give shots, draw blood, check blood pressure, examine the bottom of paws, look for lumps on her underside, use ultrasound, and artificially inseminate. She also created beautiful painted fundraising items with the “paw pressed in paint” method.  Ultrasound was key to saving her life during the delivery of one of her babies. Her training did not just benefit us here at Potter Park, but what we learned was published and available to others.

Little Girl’s bloodlines were considered very important in AZA zoo populations by the Species Survival Plan for snow leopards. To that end, she was paired with four males over the years (Tankh, Buster, Vladamir, and Ramir), six if you count the two artificial insemination donors. She produced three cubs but only one survived. That was Tashi.

Tashi, a male sired by Buster, was born in 2007. Mom did not show interest in raising him, so the zookeepers took over. Without siblings to grow up with the decision was made to give him more contact with snow

leopards and he was sent to Zoo Boise at about six months of age. He was adorable, of course, and great fun to watch while he was here, but he had to learn that he was a snow leopard and it worked. He has fathered at least two cubs at Zoo Boise. Little Girl succeeded in passing her genes along to Tashi, and he to his cubs. 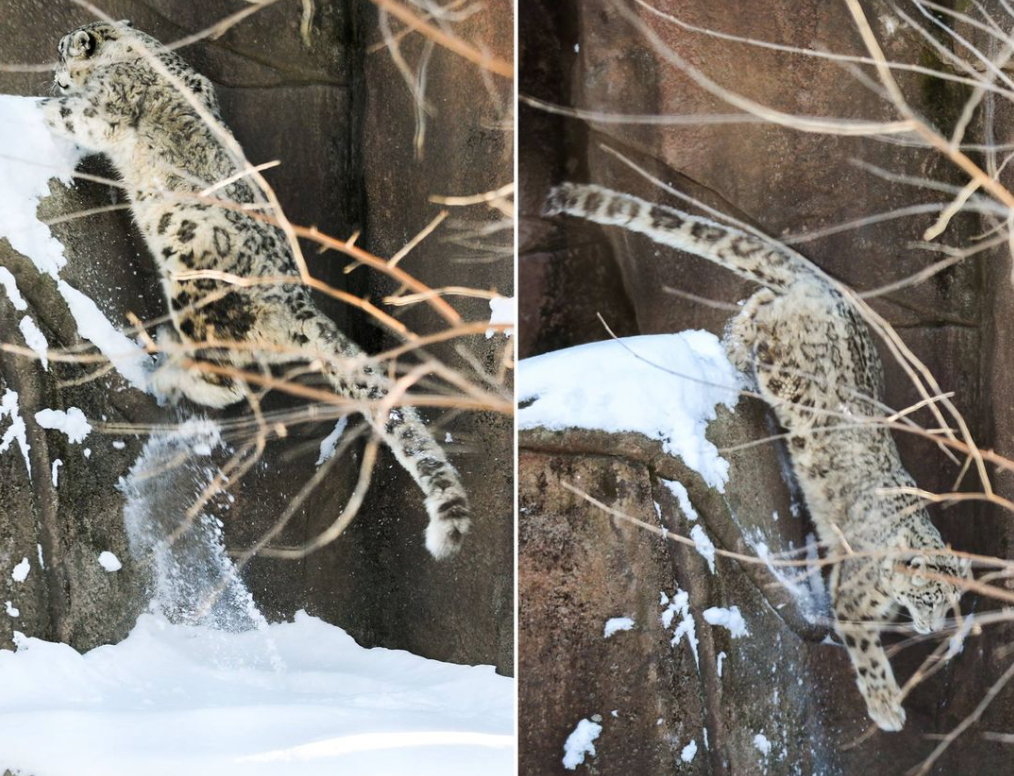 Male and female snow leopards normally are separate except during breeding, but Little Girl had a way with the males she was with over the years. They liked to stay together at all times of the year. Even when Tashi was born, she ignored him and returned to the male.

In her prime, Little Girl loved to be outside, and she loved her spot on the highest rock in the exhibit. She seemed to reach it easily and gracefully with a couple of calculated leaps. She also was not too shy to lie out on the rock in the front of the exhibit, giving visitors a real thrill. For enrichment, she could shred a pumpkin and bat a melon around like a kitten with a ball, and she engaged with the neighboring tigers by running along the fence with them. 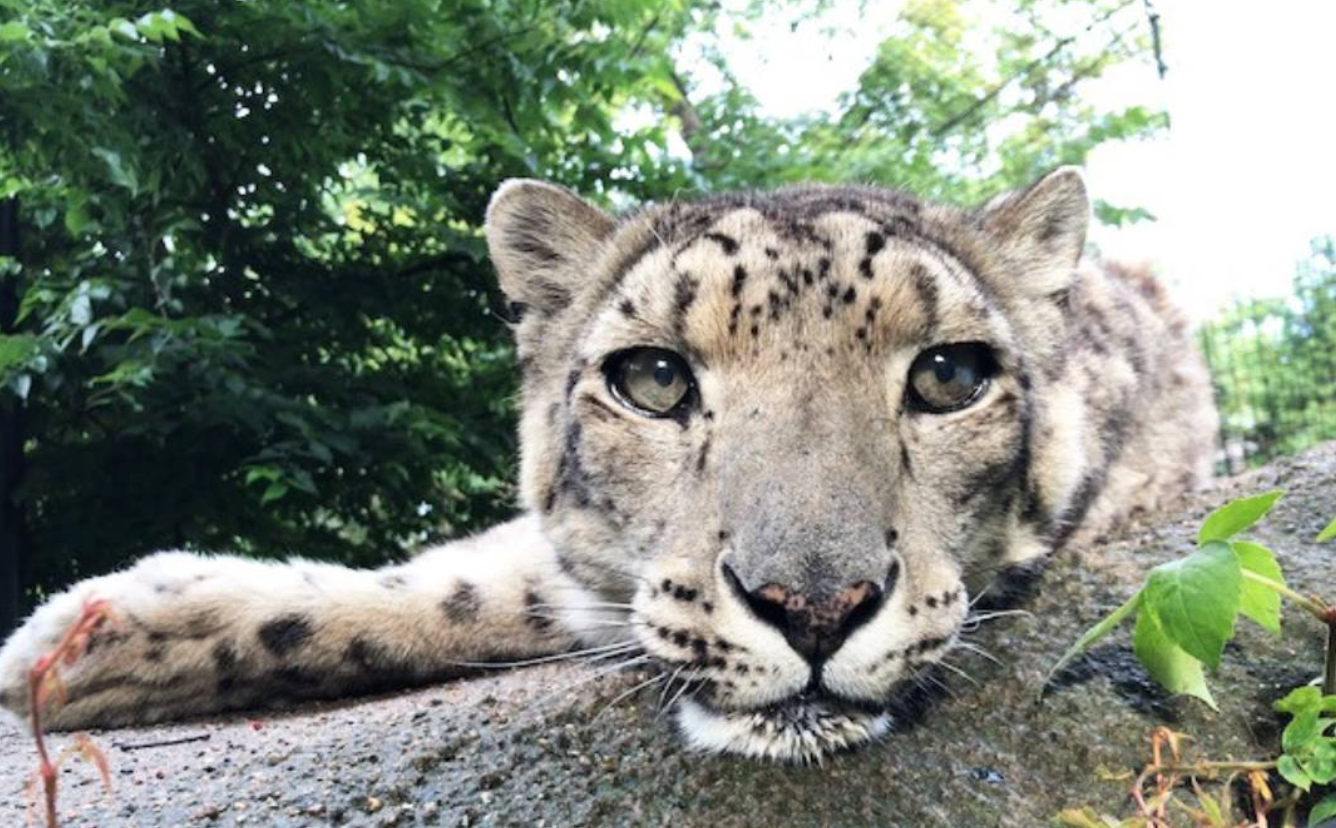 Toward the end of her life, the highest rock was too much and she spent a lot of time down on the rocks closer to zoo visitors. In 2019, she passed away, having graced our world for almost 21 years.

Do you have a story about snow leopards at the zoo? Share your story. Go to “Contact” on this website and leave a message in the drop-down menu to “What is your message regarding?” – “Story Submissions for Zoo Centennial.” Please include the decade or general time frame that applies to your story.

A tribute video for Little Girl after she passed away in 2019. 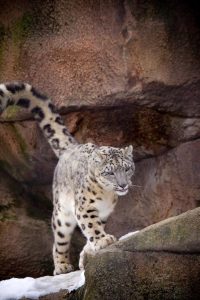 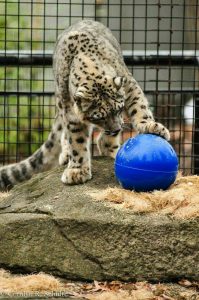 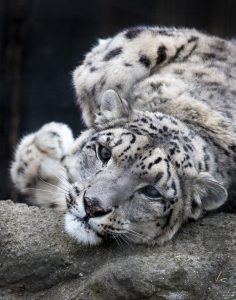 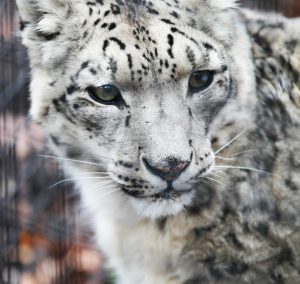 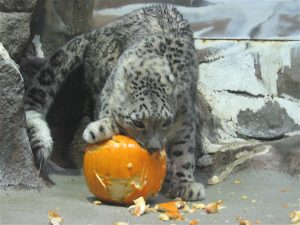 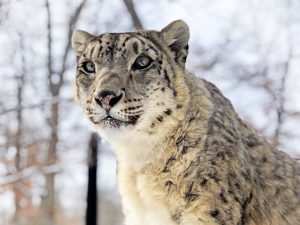