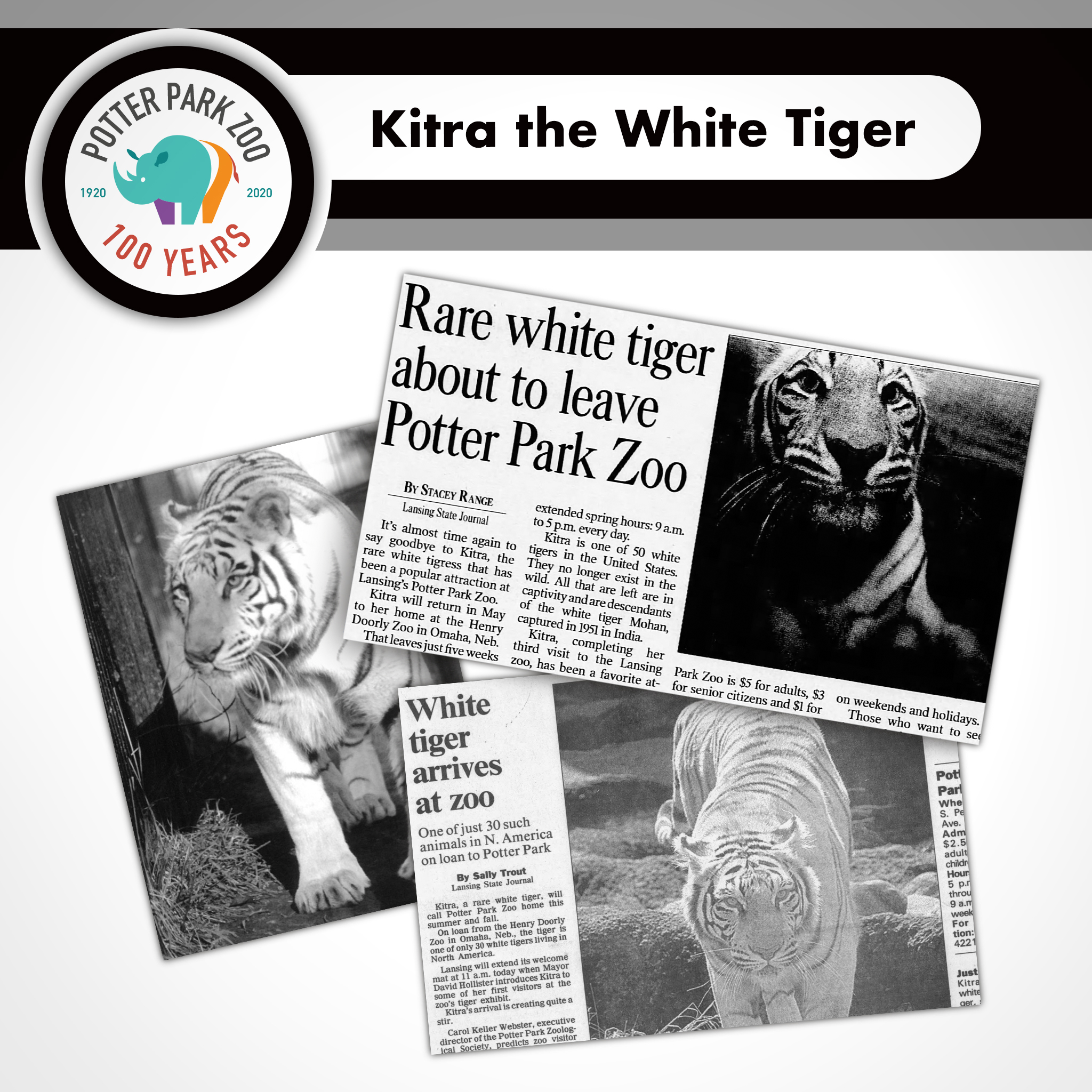 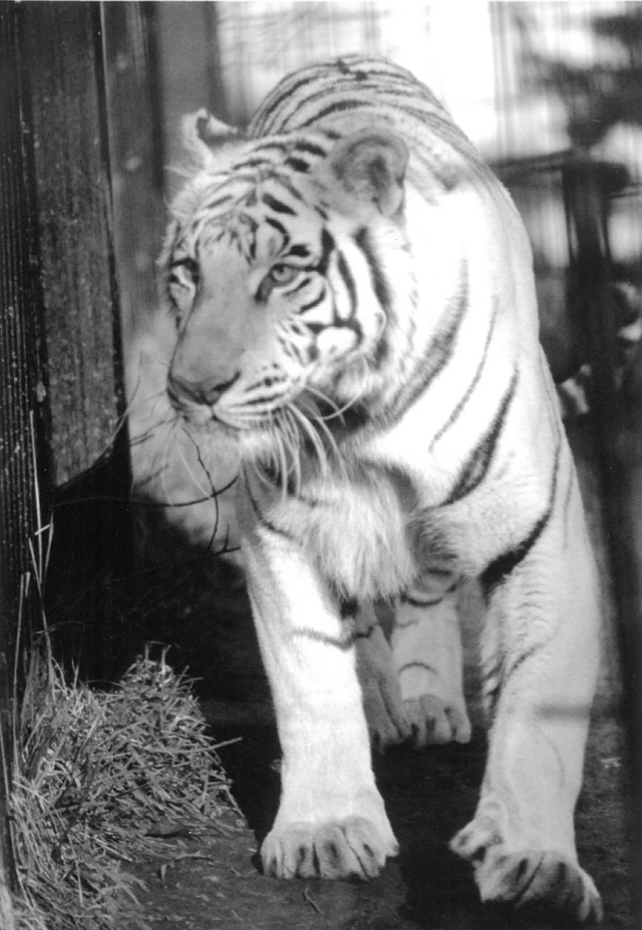 Kitra the white Bengal tiger was a very popular animal during her time on exhibit at Potter Park Zoo, which occurred within the window of 1995 to 2002. A rare and unusual animal with a stunning appearance, Kitra came on three different short-term loans from the Henry Doorly Zoo in Omaha, Nebraska. She would spend a total of 5 years and 4 months at Potter Park, and her distinctive looks never failed to draw a crowd. Visitors might see her roaming her outdoor enclosure, roaring loudly, and occasionally jumping in pools of water to cool off. As a form of enrichment, hanging deer legs would prompt shredding and gnawing behaviors.

In contrast to the vast majority of Bengal tigers, Kitra’s fur was white instead of orange. This condition, known as leucism, is caused by a partial lack of pigmentation and results from the expression of recessive genes from both parents. Leucism is not the same as albinism. While the anomaly can occur in Bengal tigers naturally, leucism is still very rare in wild populations due to the species’ natural dispersal behaviors. Because the condition is associated with a number health issues, its rarity is an overall benefit to the population. Selecting for these recessive genes in captivity, however, necessitates inbreeding, which can lead to a host of negative consequences over time. 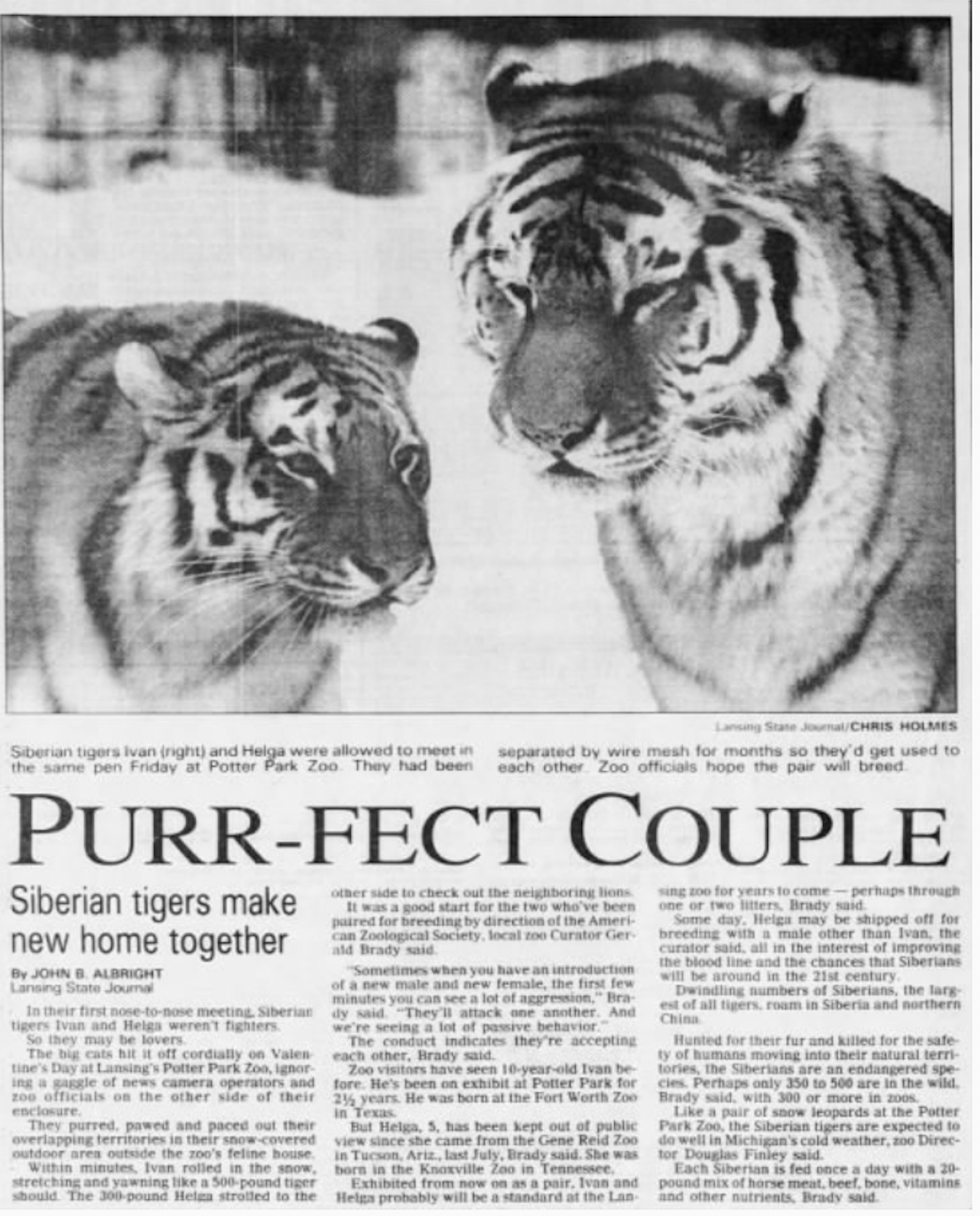 Potter Park Zoo has had tiger species in its collection for most of its existence. In 1989, when the Feline/Primate House reopened after a major renovation, the new Amur tigers (also known as Siberian tigers) were part of the species’ Association of Zoos and Aquariums (AZA) Species Survival Plan (SSP) , which manages populations to maximize genetic diversity and sustainability for future breeding. This practice involves the tracking of individuals’ lineages and matching pairs based on the degree of unrelatedness. The zoo produced successful litters with three different Amur pairs in the 1990s, 2000s, and 2010s respectively. Overall, nine Amur tigers were added to the population. 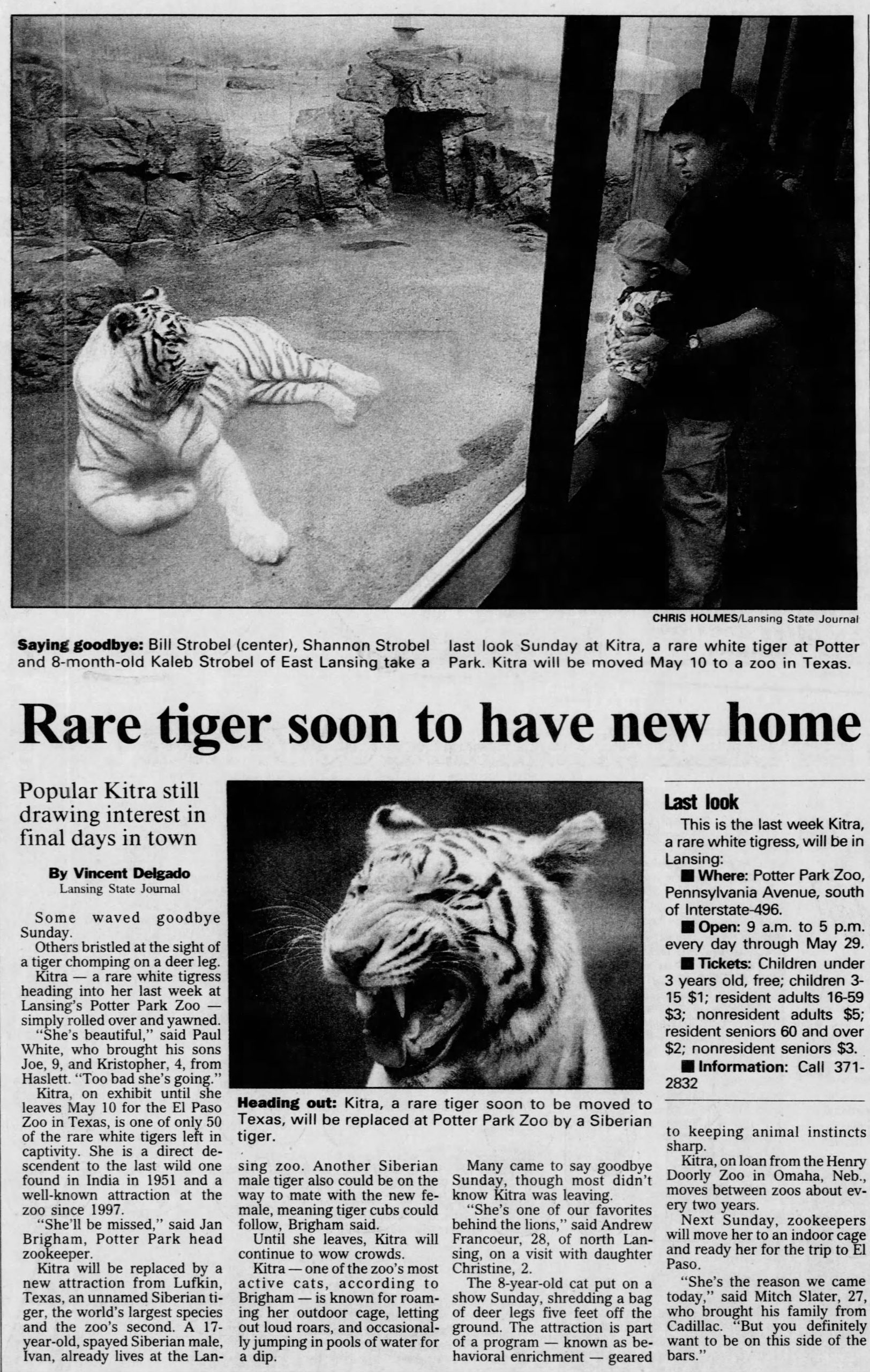 From 1995 to 2002, there was a pause in Amur breeding. The previous pair, Ivan and Helga, had produced a litter of three in 1992. Helga left after raising her cubs, and Ivan retired from breeding (though he would stay at Potter Park for the remainder of his life). While the zoo awaited recommendations for a new Amur breeding pair, Kitra the white tiger was brought to the zoo. As an exhibit animal, she was not part of approved SSP breeding programs, and was never put together with Ivan. She left Potter Park for the last time in 2002 and returned to Omaha, where she would remain until her death in 2013 at 22 years of age.

Though there were still AZA zoos housing white tigers during this period, the association was moving away from the practice due to serious concerns regarding the welfare of white tigers as a result of inbreeding and health problems. Their presence also sent confusing messages to visitors regarding conservation goals by cultivating traits that did not represent the best interests of endangered Bengal tigers in the wild.

Do you have a story about Kitra? Share your story. Go to “Contact” on this website and leave a message in the drop-down menu to “What is your message regarding?” – “Story Submissions for Zoo Centennial.” Please include the decade or general time frame that applies to your story.