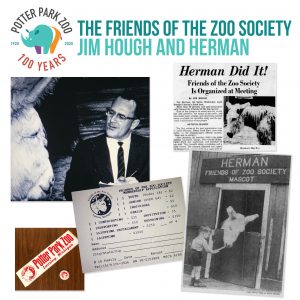 The 1960s were not a good time for the zoo, but long-time Lansing State Journal columnist Jim Hough and a Mexican burro named Herman helped turn things around.

Jim Hough was a beloved columnist for the Lansing State Journal, writing 9,000 daily columns in his 30 years from 1958-1988. He wrote “The Onlooker” column for more than 25 years, telling peoples’ stories in a folksy and kindhearted manner. It was hugely popular with readers. Among his crusades was an effort to save Potter Park Zoo, and he was a true champion in his efforts.

The zoo was in financial trouble. Repairs were needed and some talked of closing the zoo. In 1969 Jim Hough led the charge for reviving the zoo with his “Interviews with Herman.” Herman, a favorite at the zoo, “suggested” that the community get involved in helping the zoo.

Hough’s efforts rallied a group of local residents who founded the Friends of the Zoo Society (FOZ), which functioned as a private entity, supporting the city’s efforts. It brought new energy, involved community leaders, and raised funds for much-needed improvements: new animals and exhibits, a membership program, and budding education offerings.

In 1987 FOZ became the Potter Park Zoological Society and continued its support of the zoo in its journey to become a modern zoo through fundraising, membership, and education. 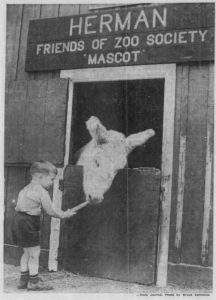 Herman lived an interesting burro life. Jim Hough told his story in Herman’s obituary, which appeared prominently on the front page of the State Journal. Reportedly he had been born on an airplane when his mother was traveling from Mexico to be a part of the Shrine Circus. He became a mascot for a Shrine band, traveling around the country. He also appeared in many parades in the Lansing area, even riding around town in an open car.

Herman was donated to the zoo in 1951. He loved carrots and a good scratch on his ears and was a big hit with children. He was honored as the mascot of FOZ for his role in Hough’s work. After a good, long life he died in 1971 at the age of 23. His image was prominent on FOZ materials for some time, including on buttons that were sold to raise money to bring Bingo the elephant to the zoo in the early 1970s. 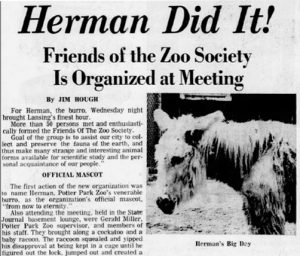 FOZ was able to harness community support to make improvements in the zoo and foster a feeling of ownership that is invaluable to a public institution.

In a Lansing State Journal editorial in that era: “The Friends of the Zoo Society, founded 10 years ago, has demonstrated again what volunteerism is all about and what it can do for a community when dedicated people pitch in for a common goal.”

Jim Hough, called the “father of the zoo” for his efforts, continued to advocate for the zoo in his columns. He, however, downplayed his own role. While in retirement he wrote, “I’m darn proud of those days when Lansing area folks stood tall and declared their love for their zoo. … the real father of the zoo is the character of Lansing’s people.” He still believed in the zoo and reminded city government and community leaders, “Don’t forget that Lansing loves its zoo.” Jim Hough passed away in 2017 at the age of 85.

Thank you to Mr. Hough, the Society, the community, and, of course, Herman for making a difference for the zoo. 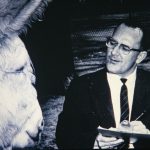 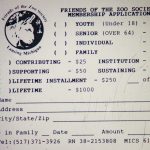 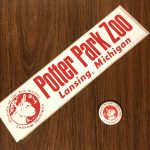