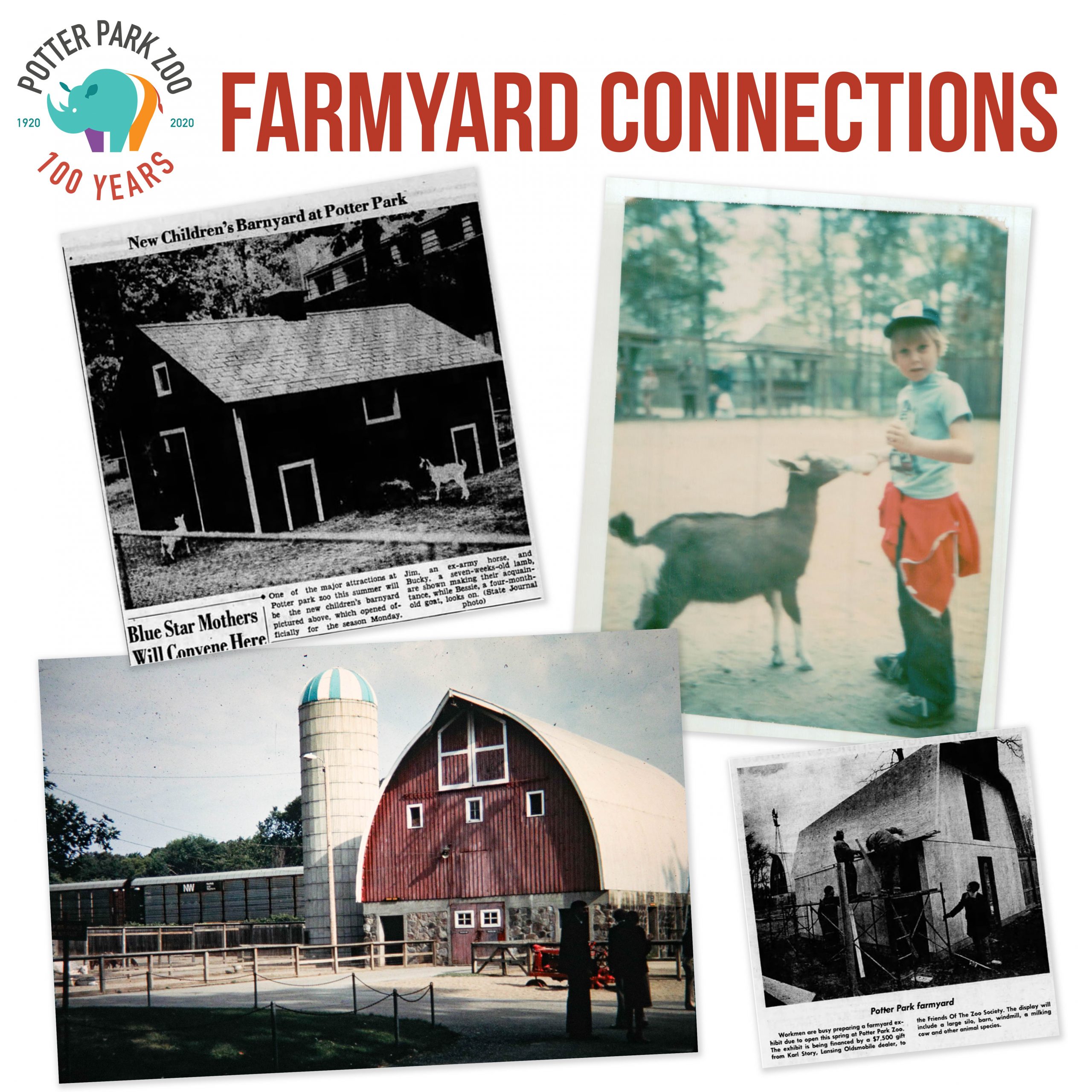 The farmyard has been a popular stop at the zoo and a link to encounter experiences over the years, offering visitors, especially children, closer contact with animals. These opportunities have come in different spaces in different locations around the zoo. Here is the story of how they all came together. 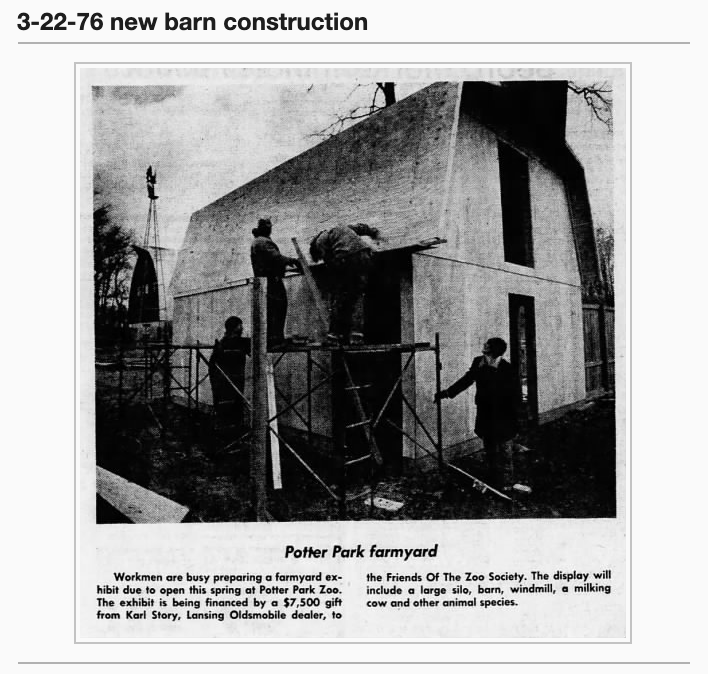 It is believed that the big barn that still anchors the farmyard was built in 1940 for on-site storage of hay for hoofstock such as buffalo, deer, cattle, and goats at the zoo. Reportedly it could hold fifty tons of hay that was cut on park properties. The lower level provided shelter for some of those animals. It remains the primary storage site for hay at the zoo. 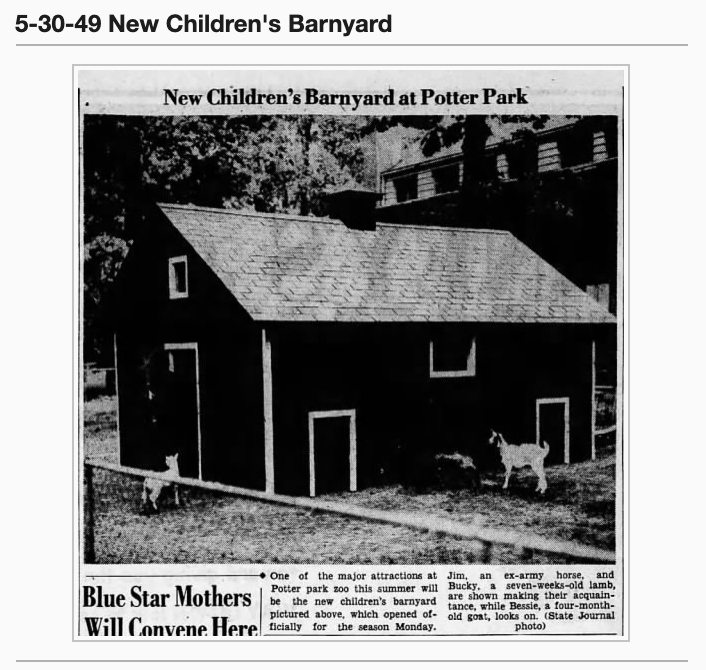 In 1949 the children’s barnyard was announced as a new attraction for the young. According to Lansing State Journal (LSJ) accounts it was a new barn where children could see “Jim, an ex-army horse, two lambs, a young goat, Bessie, four pigs, and chickens.”

In 1962 that same barn was featured in an LSJ photograph with Christmas greetings, reportedly the first such display at the park. In the same vein, the large animal building displayed Christmas lights that could be viewed each night until 10 p.m. It sounds like an early precursor to the current Wonderland of Lights. 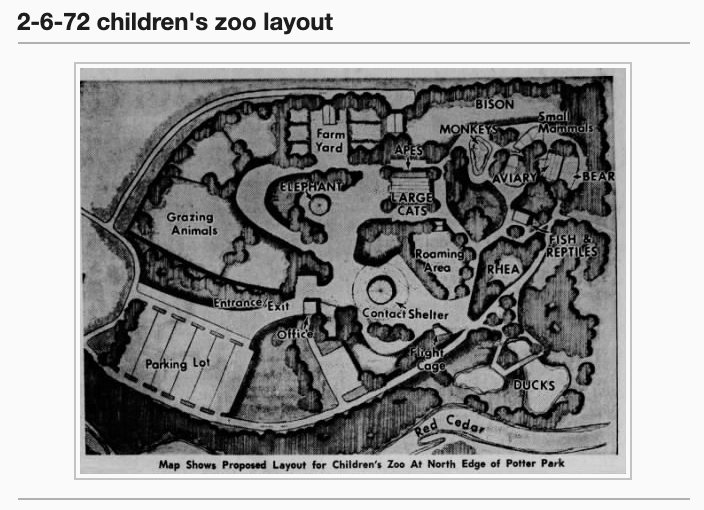 In 1971 the Friends of the Zoo Society developed a plan for a children’s zoo that would be located just west of the main zoo. It was envisioned as a place where “children will be able to enter a contact zoo, where they can feed, touch, and be close to wild and domestic animals.” It was intended as an area that could be enjoyed by everyone, regardless of age, political affiliation, or station in life.

By 1972 Zoo Society had gathered input from other zoos that indicated having a children’s zoo separate from the main zoo was not a good approach for a small zoo such as Potter Park. The decision was made to immerse the desired components within the original zoo. Work progressed on the contact and free-roaming areas as well as the farmyard. 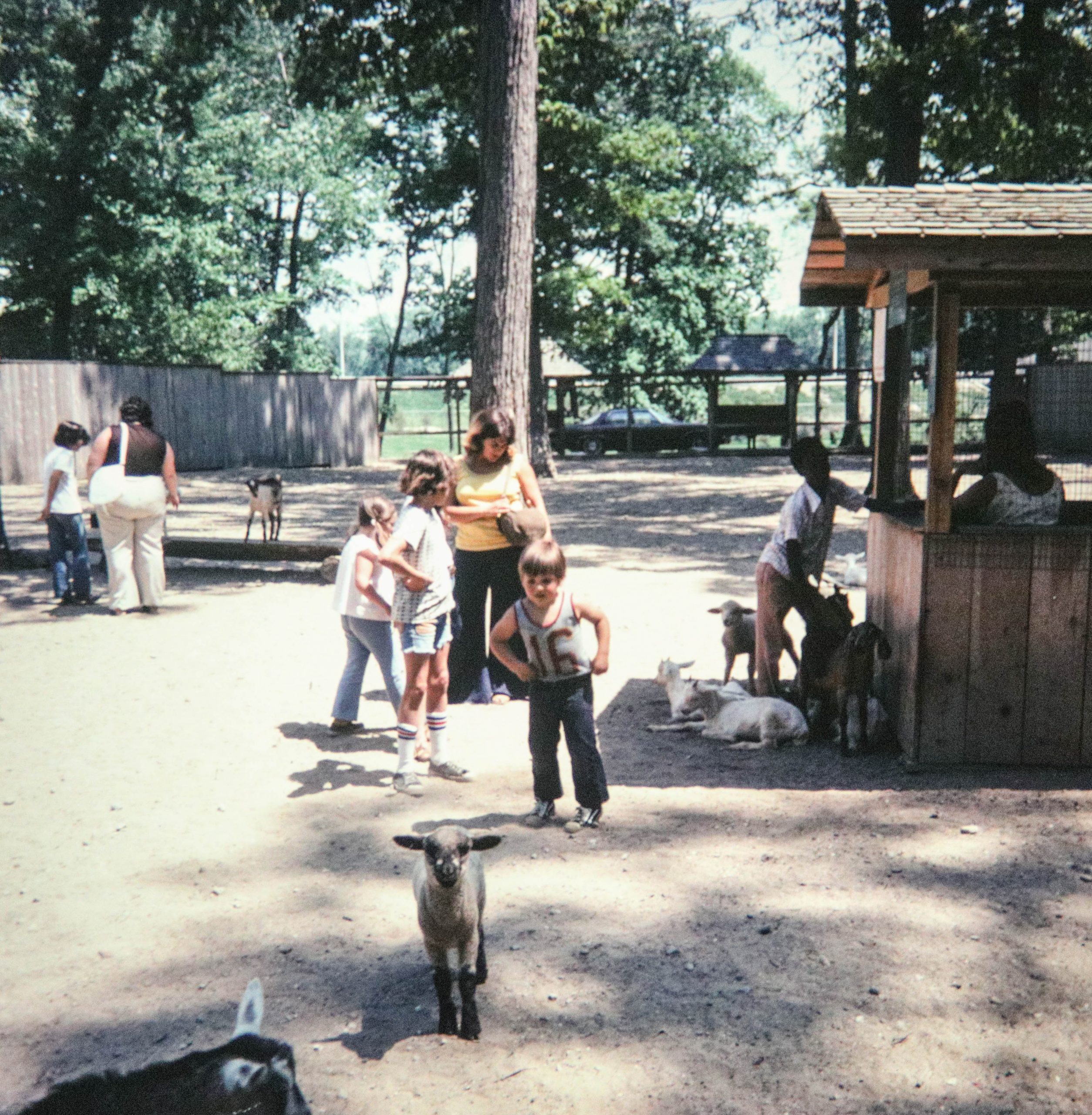 By 1973 the contact and free-roaming areas and a shelter barn were up and running to the south of the Lion House (in the current bongo yard area). Visitors could purchase bottles of milk for 25 cents to feed baby animals such as goats and lambs. In 1978 a new arrangement was implemented with small exhibits such as rabbits, guinea pigs, and baby ducks, where zookeepers could share information and allow touching.

By 1976 the farmyard complex was completed, including a silo (which contained a concession stand within), a windmill, and a small red barn (which is still in the barnyard, housing Guinea hogs and alpacas). 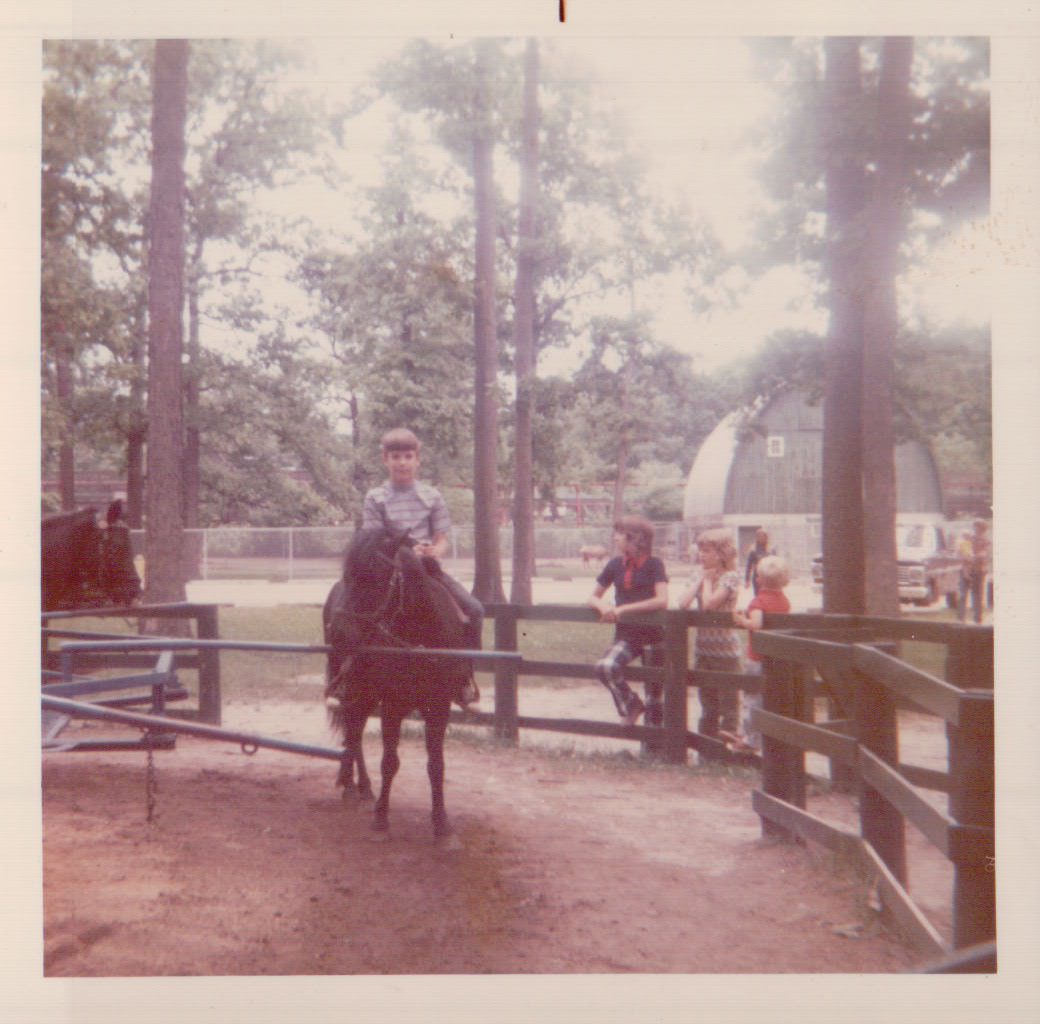 In 1954 a pony ride concession was added at the west end of the zoo. It was a ring ride, with the ponies hitched to a spoked wheel.  In 1979 the Zoo Society took over the concession, providing the necessary saddles, blankets, and employees, and putting the ponies on exhibit during the winter. 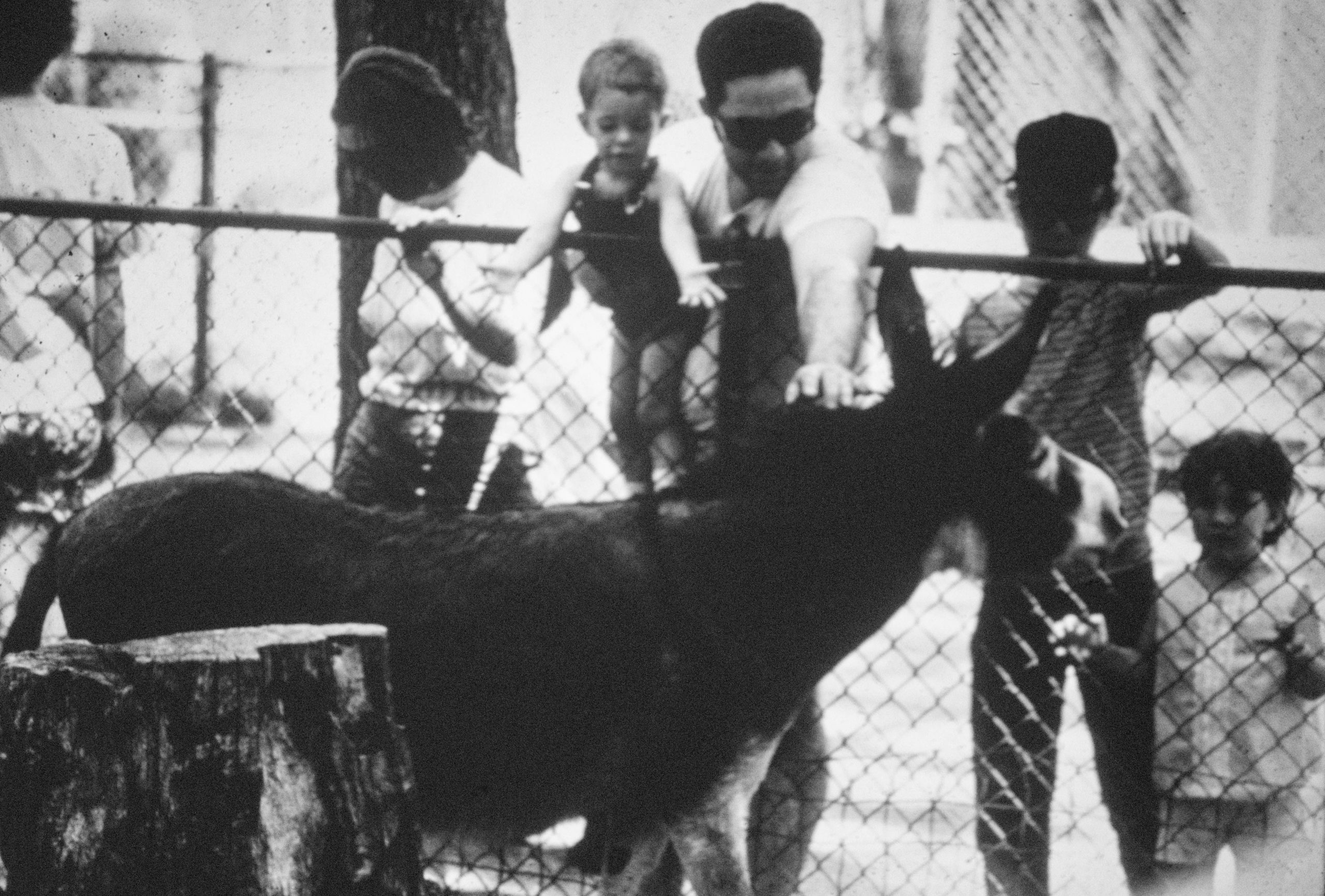 By 1992 all of the above exhibits were in for changes and would come together – the farmyard, contact and free-roaming areas, pony rides, along with education – in the farmyard area of the zoo. The farmyard was renovated and renamed “Animal Encounters.”

The Animal Encounters Building (current Animal Clinic) was built to house education animals used by docents in presentations in the nearby outdoor amphitheater, and visitors could view small animals through the window. The goat area welcomed contact. The pony ride moved to just west of the farmyard and became a trail ride. The elements of the children’s zoo remained within the Potter Park Zoo.

The next planned farmyard renovation is expected to include heritage breeds that have long been a fixture of traditional farms, and a walk-through barn experience. There will also be an introduction to sustainable farming practices that guests can try at home and a farm-themed play area for children.

Do you have a story about any of the farmyard experiences at the zoo? Share your story. Go to “Contact” on this website and leave a message in the drop-down menu to “What is your message regarding?” – “Story Submissions for Zoo Centennial.” Please include the decade or general time frame that applies to your story.