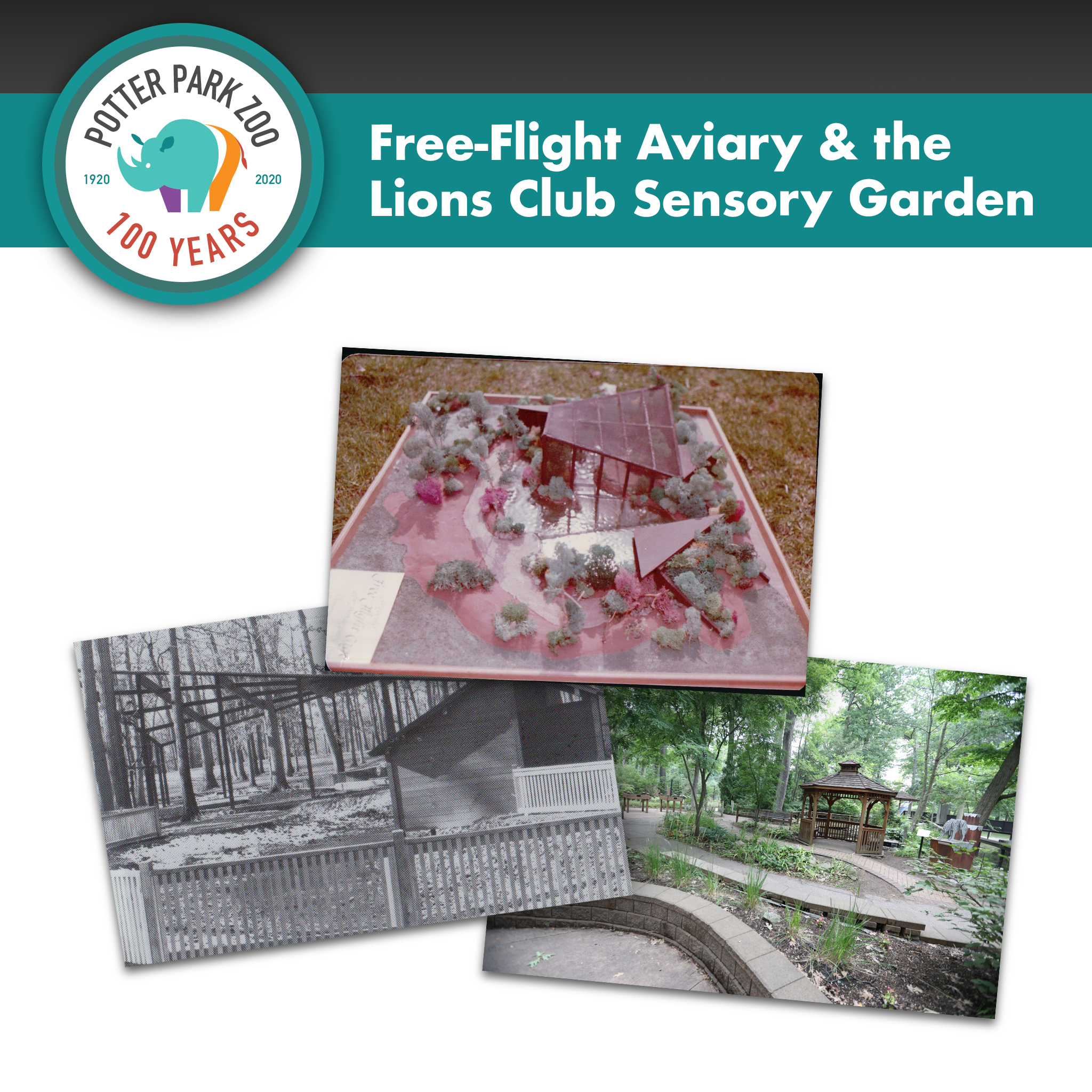 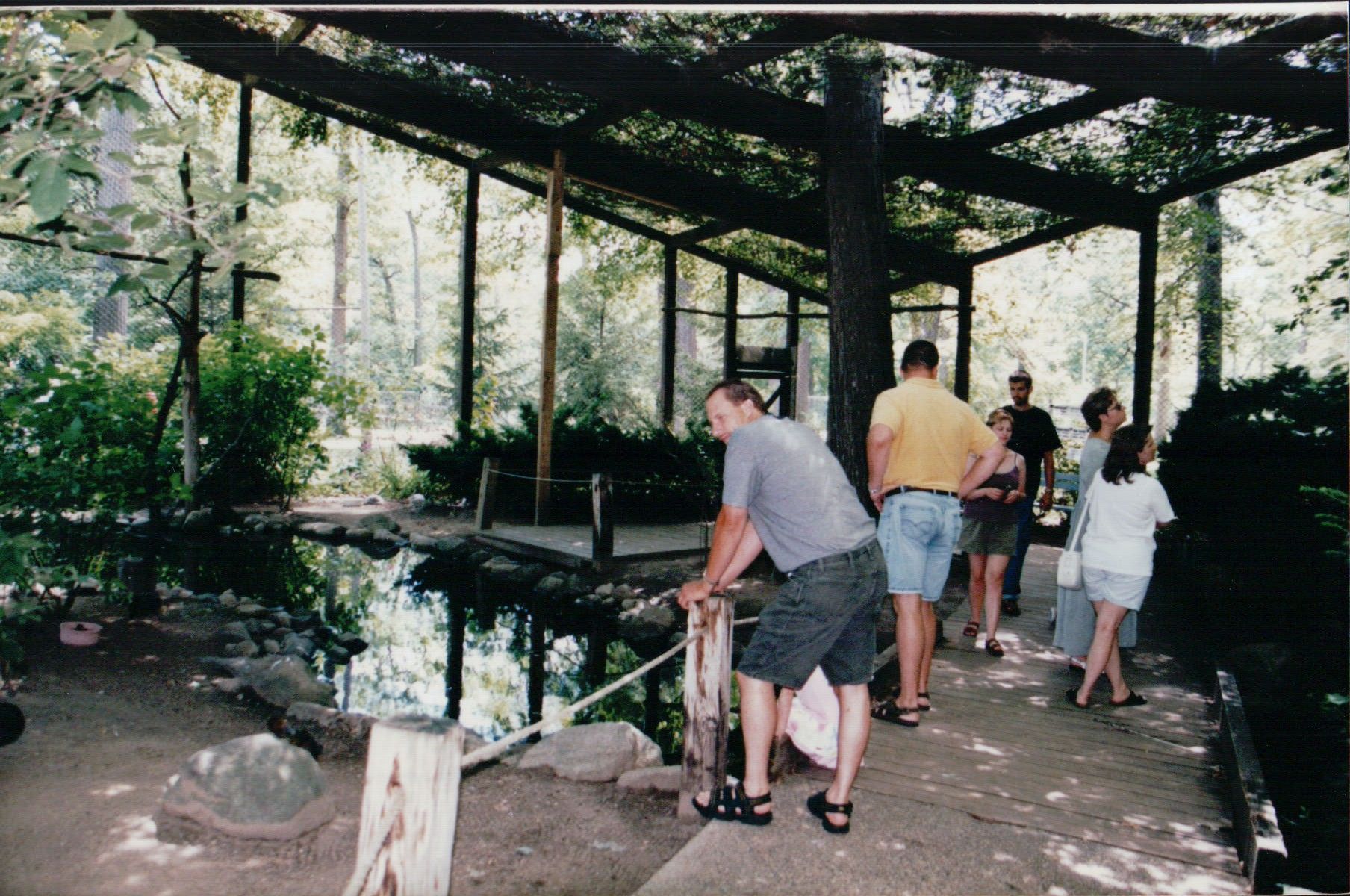 The original aviary at Potter Park Zoo (known first as the Bird House and now the Bird and Reptile House) was built in 1941, and has featured traditional exhibit design throughout its lifespan. The free-flight aviary, however, offered an entirely different experience to local zoo-goers when it opened in 1982. The exhibit was located next to the current Patagonian cavy exhibit near the Duck Pond, and featured an enclosed but accessible outdoor space. Inside were trees, shrubs, rocks, and a waterfall, which recycled water from a neighboring exhibit and fed into a stream. A variety of exotic and native bird species flew freely under a wire-mesh structure, and visitors could immerse themselves in the birds’ environment as they walked along a designated path. 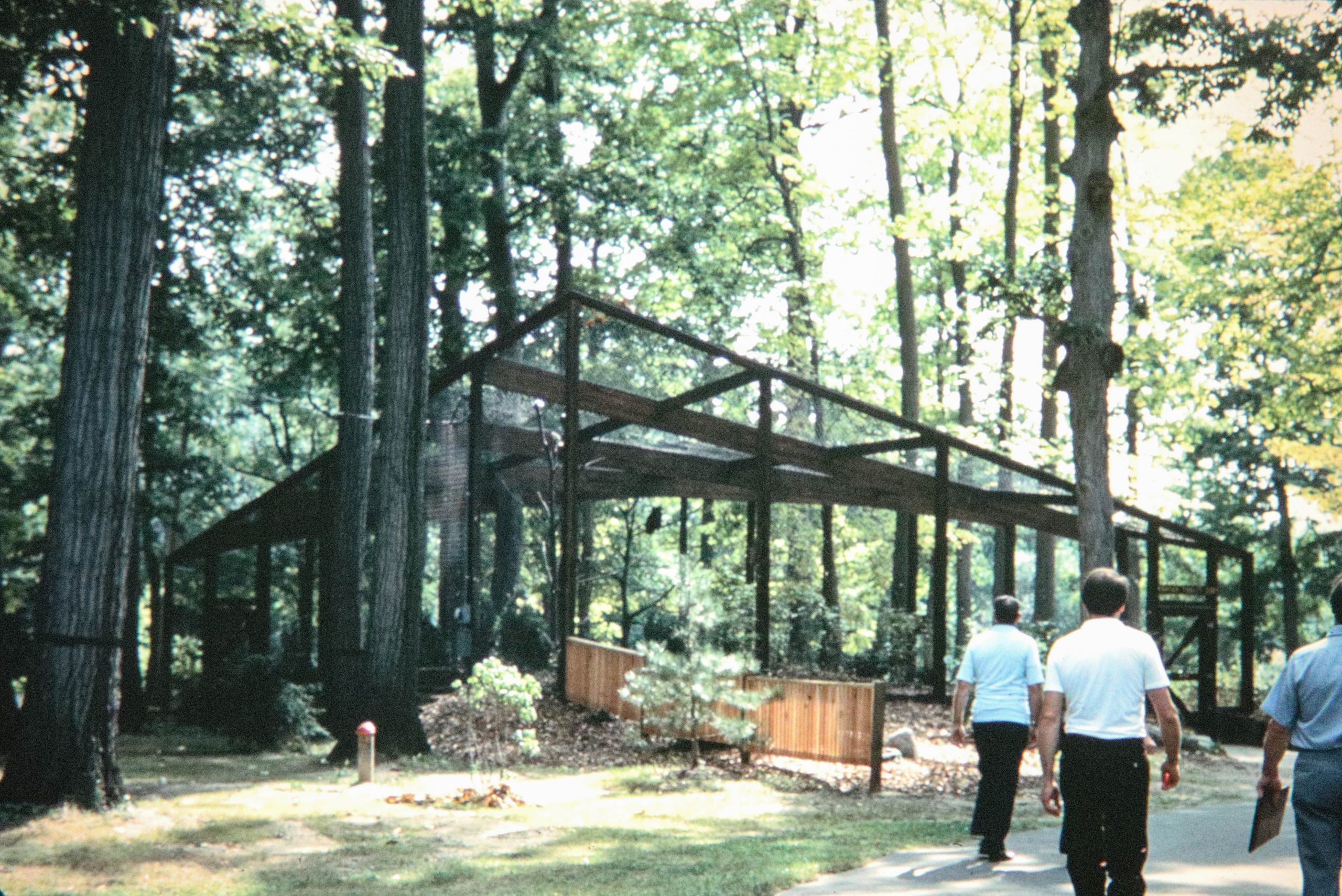 The view from outside the enclosure was reminiscent of an art installation – the exterior structure resembled a bird in flight, and was designed to change appearance based on the viewer’s position. The bird’s wings appeared to be flapping downward when viewed from a higher angle, and upwards and when viewed from a lower angle.

Like many Friends of the Zoo Society (FOZ) projects at the time, the Free-Flight Aviary’s success was a testament to the society’s dedication and the many individuals and organizations that contributed funds, materials, and labor. Among these was local architect Morris Stein, who designed the exhibit at no cost.

By the 2000s, the Aviary was showing its age, and the decision was made to dismantle its outside structure. The natural features on the inside remained. Wings Down Under, the new interactive bird experience located nearby, replaced it as an encounter in 2009.

The Lions Club of Lansing was interested in creating a Sensory Garden at the zoo, and the natural setting of the old free-flight aviary site was a great fit. The Lions Club is a service group in Lansing that – like the zoo – has been active in the community since 1920, and specializes in sight-related projects. For the sensory garden, they intended to create a relaxing space where individuals of all ages and abilities could immerse themselves in the sights, sounds, and smells of the outdoors.

The Lions Club planned, funded, and implemented the project in three stages. The majority of the garden would be landscaped and planted first, with the natural features of the old space incorporated into a new layout. This phase was completed in 2012.

Next came the installation of three sculptures, which were selected and funded by a competitive grant in 2013. The works included a snow leopard, a bird of paradise, and the imaginary beast “Jabberwocky” from Lewis Carroll’s classic poem. These works of art gave the garden a visually interesting flair, and could be be touched freely by visitors.

Finally, in 2019, a new waterfall was created and a stone marker was placed, honoring the organization’s centennial and completing the project. Thus, the site transformed from the free-flight aviary to the Lions Club Sensory Garden. Both projects were realized because of the generous support of the community. 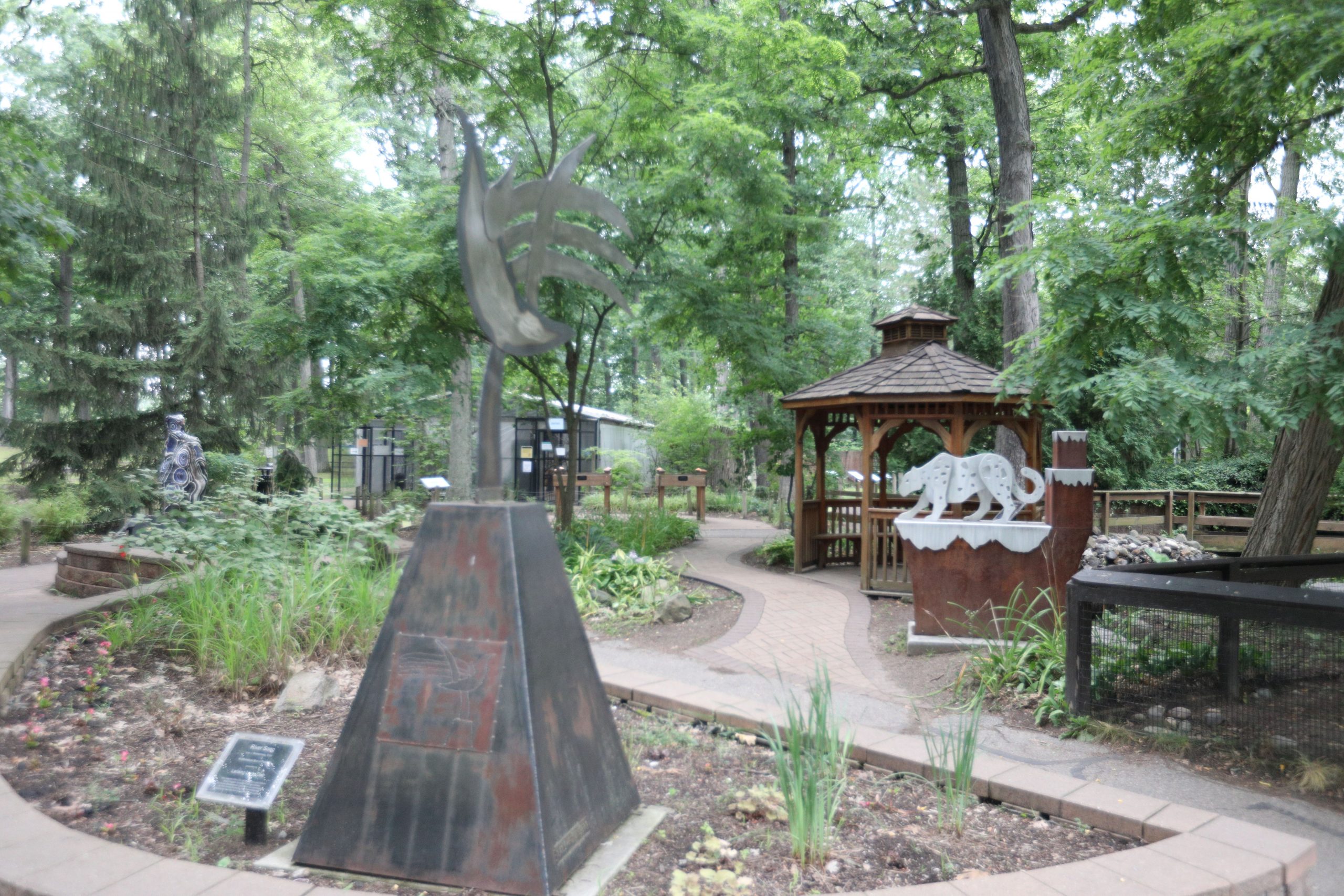 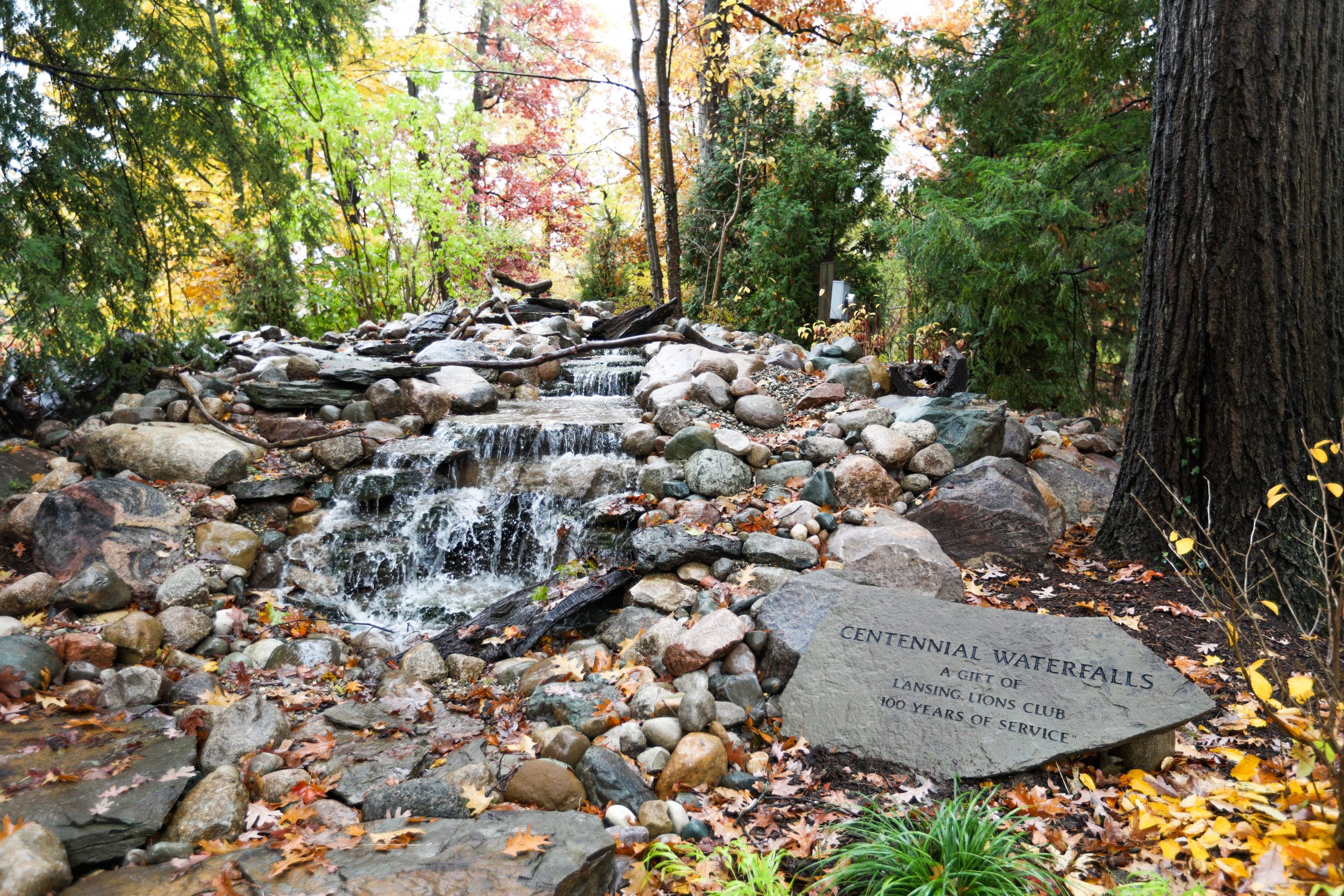 The sensory garden continues to be enjoyed by many, and has lived up to its name. Visitors in the summertime will experience the sights and smells of flowers and herbs, sounds from the stream and the nearby birds, and the feel of different textures used on the pathways. The additional comforts of benches and the gazebo make this a great place to stop and relax as you make your way through the zoo. 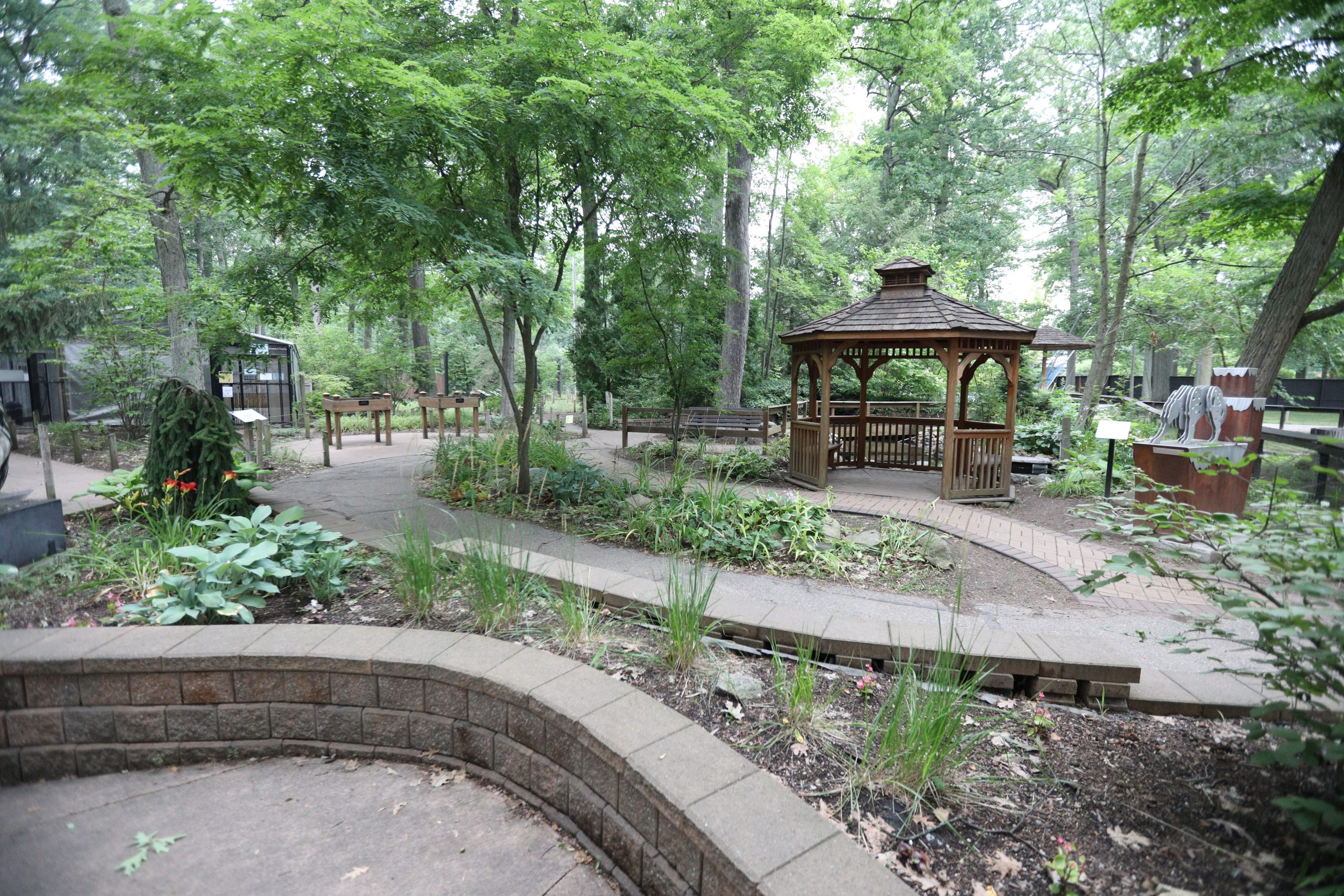 Do you have a story about the free-flight aviary or the Lions Club Sensory Garden? Share your story. Go to “Contact” on this website and leave a message in the drop-down menu to “What is your message regarding?” – “Story Submissions for Zoo Centennial.” Please include the decade or general time frame that applies to your story.