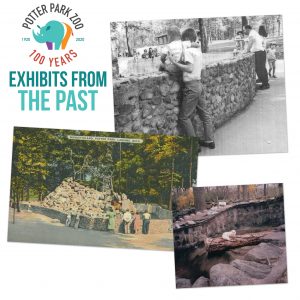 The Great Depression had a huge impact on life in the 1930s. Even so, Potter Park Zoo was able to add significantly to the core of the zoo at a much-reduced cost, thanks to the Works Progress Administration (WPA). The WPA was created by President Franklin Roosevelt in 1935 to help lift the country out of the Depression. The program employed mostly unskilled people to carry out public works infrastructure projects. Many major zoo buildings around the country were built as WPA projects from 1935-1943, including Potter Park’s Monkey Island (1936), the small moats (1938), and the Aviary, or Bird House (1941). Many supplies used were reclaimed or donated materials, including native Michigan field stone. 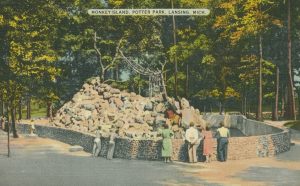 The first major WPA building at the zoo was Monkey Island, which was constructed as rocky ledges equipped with a slide, trapeze bars, and flying rings, surrounded by a deep, concrete moat filled with water to keep various monkey species inside. Visitors lined the external walls to view the action unimpeded by bars.

The monkeys wintered in the Lion House. Their release on the island each summer and their ensuing antics were greeted with great excitement by visitors. In the 1960s and ‘70s it was reported that aoudad, or Barbary sheep, were sharing space in the exhibit. They remained all year and could retreat to a heated space off exhibit if needed. 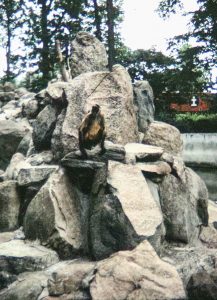 As mentioned above, the moat was intended to keep the monkeys on the island, but it was not always successful. H. Lee Bancroft, the city’s Superintendent of Parks and Cemeteries at that time, in a look back at interesting zoo stories, recounted several tales of breakouts involving leaping and swimming skills.

In 1987 the spider monkeys that had been summering on Monkey Island (and had become escape artists when they lost their fear of the water in the moat) and wintering in the Lion House (which was closed for renovation) found new year-round quarters in the new spider monkey exhibit (current red panda exhibit) in front of the Lion House.

The space on the island was converted to an exhibit for bighorn sheep with a group arriving in late 1989. The bighorn sheep produced a number of babies in their 20 years at the zoo. It was not unusual to discover one or two newborns each spring with the remarkable abilities to blend in with the rocky habitat and navigate it with ease.

In 2010 the behind-the scenes area was deemed unsafe for the animals and the humans who cared for them. The sheep left for another zoo. The exhibit was demolished and has become the Green Space, used as a gathering area for special events and everyday visitors. 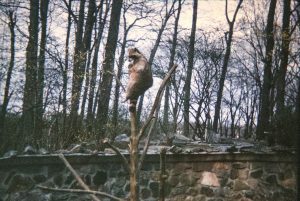 The small moats were a series of barless enclosures built to the east of Monkey Island. In their day, these exhibits were considered state-of-the-art, presenting animals without caging, using the moat and the rock overhang to keep the animals inside the exhibit.

However, they are small and difficult for zookeepers to service, with limited options for the animals. No longer “state of the art,” they are scheduled to be phased out in the near future.

Through the years, the small moats have housed many different types of animals, including coatimundi, river otter, binturong, and black bear cubs to name a few.

The Aviary, or the Bird House, was designed for “jewel case” exhibits, that is, small glass-front exhibits that showcased the birds against colorful backgrounds but did not provide very much space. Lighting focused on the exhibits rather than the public area in order to lessen the animals’ awareness of visitors. The building had a complete basement with a commissary room and cold storage. Many of the exhibits have been renovated to provide larger, more natural exhibits for the species housed within.

This building is now known as the Bird and Reptile House. Its current diverse collection includes reptiles, amphibians, and small mammals, with notable examples including Gila monsters, tamarins, and the critically endangered Puerto Rican crested toads.

What about the Large Moats behind the Bird House? 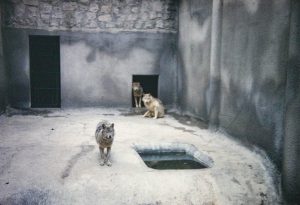 There were already bear pits to the east of the zoo’s first permanent brick animal house (current Keepers’ Lounge) when it was completed in 1921. Forty years later they were replaced with the large moats, which were added to the back of the Bird House; they were not part of the original WPA construction. With high concrete walls and surfaces, these enclosures were designed without natural materials in order to make cleaning easier. Less than 30 years later, they were deemed too small and dated to continue to house animals and were officially closed by 1990.

In addition to holding bears, the large moats also held wolves, coyotes, wolverines, and other carnivores. When these exhibits closed, the animals either transitioned to other spaces in the zoo or were placed out to other zoos.

Do you have a story about any of these exhibits or their animal residents? Share your story. Go to “Contact” on this website and leave a message in the drop-down menu to “What is your message regarding?” – “Story Submissions for Zoo Centennial.” Please include the decade or general time frame that applies to your story.