Tucker is a yellow-naped Amazon parrot that was hatched at the zoo in 1994 and has lived her life here since. She was an ambassador animal at the zoo and in the community for many years and is recognized by many who have seen her in presentations. She is known for her entertaining repertoire of words and sounds that she can mimic. 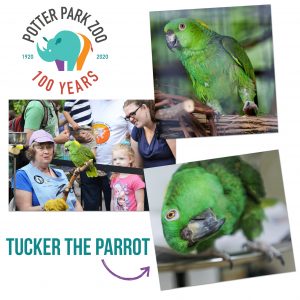 Shortly after Tucker was born, a zookeeper took her home to take care of her and prepare her to be an ambassador animal. The zookeeper had a parrot at home and raised other hatchlings from the Bird House. The goal was to get Tucker comfortable with people handling her. When she returned to the zoo, it would be time for her to become comfortable with different people handling her.

For some weeks the zookeeper hand-fed her a formula with an eyedropper and then a spoon. When Tucker was able to eat a pelleted diet, it was time for her to return to the zoo. The education curator and docents would handle her. Soon she took up residence in the Animal Encounters Building (now the Animal Clinic) in the farmyard, which was the home of the zoo’s ambassador animal collection until the Discovery Center facilities were built.

While still at home with the zookeeper, Tucker picked up her famous “Here kitty kitty meow” routine. The keeper reports that she did not train Tucker to say that, but that Tucker picked it up from the keeper’s parrot, who learned it from a repetitive parrot tape recording that the keeper used to play for her bird. Tucker learned to respond if prompted with “What’s your name?” or “Can you call the kitty?”

While living in the Animal Encounters Building, she learned the “screen door.” The rusty screen door’s hinges squeaked as zookeepers or docents opened the door and said hello or exited and said goodbye. She learned to mimic that screen door sound. She also could imitate the static sound of keepers’ radios. She continued to add to her vocabulary. Her singing of “Fly Me to the Moon” and commentary of “blah, blah, blah” during a docent’s presentation were among her utterances. If she was seeking attention, she would reel off an inventory of her sounds, one after another.

Tucker moved to the new animal quarters in the Discovery Center when the building opened in 2000.When the zoo got its first full-time veterinarian at the zoo in 2003, the vet learned that staff really did not know what sex Tucker was. She was assumed to be a male, but males and females look alike in parrot world. The vet included a DNA test with a blood draw and determined that “he” is actually “she.”

In 2018, after over twenty years serving as an ambassador animal in presentations, zoo staff decided to move her onto exhibit at the Bird and Reptile House. This summer she has even been enjoying a nearby outdoor exhibit. These have been good moves for her. She loves the attention and continues to regale visitors with her abilities.

Do you have a story about Tucker? Share your story! Go to “Contact” on this website and leave a message in the drop-down menu to “What is your message regarding?” – “Story Submissions for Zoo Centennial.” Please include the decade or general time frame that applies to your story.