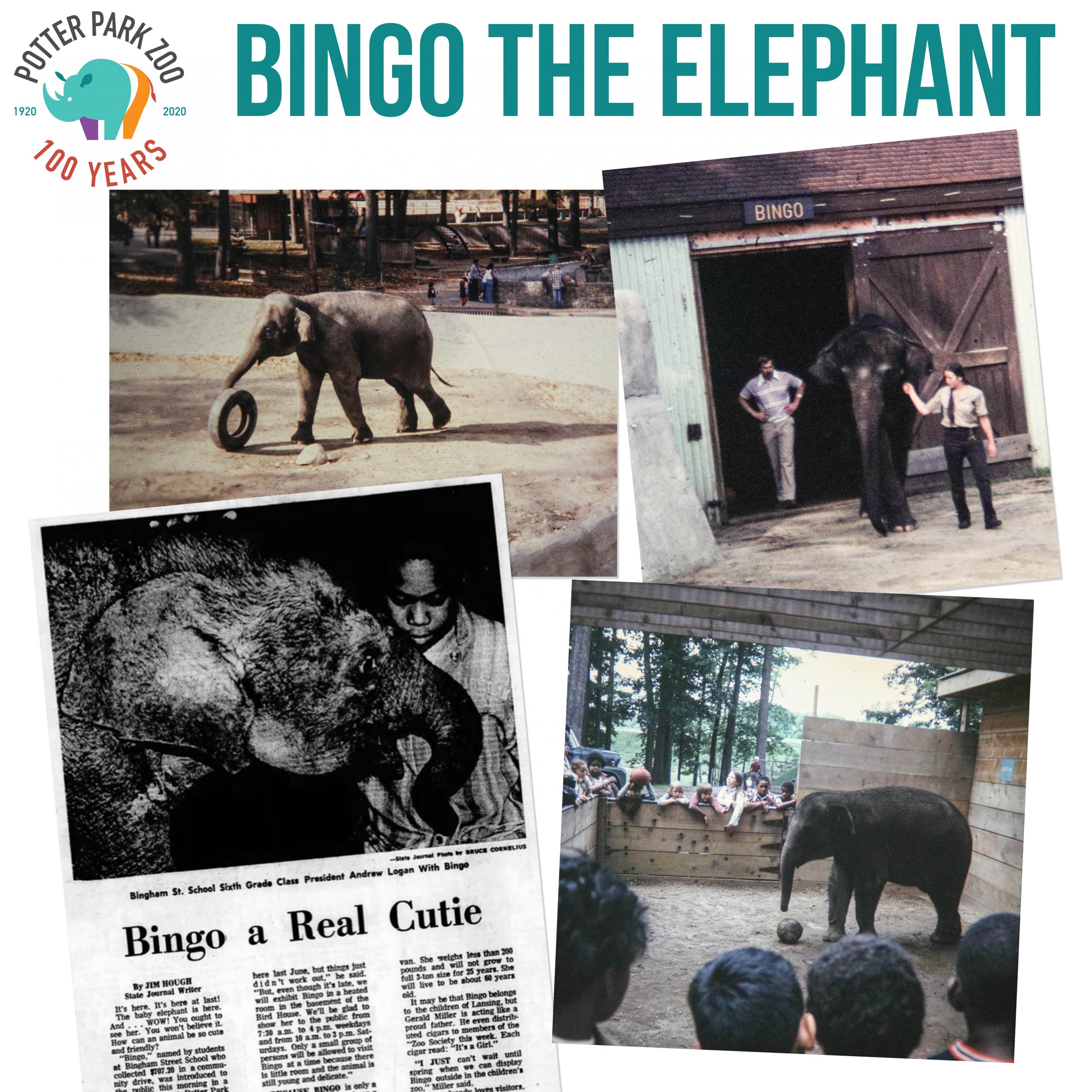 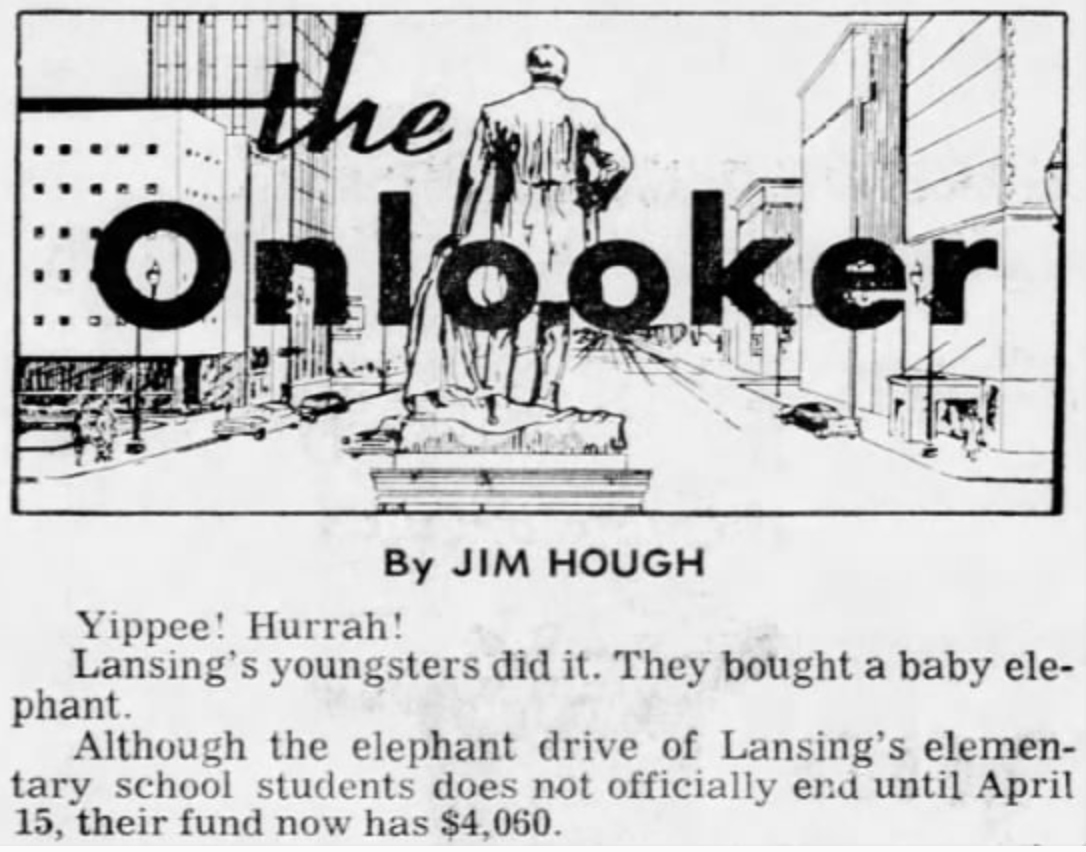 The Friends of the Zoo Society was created in 1969 to help the zoo make much needed improvements. Its ability to raise funds as well as obtain donations of labor and materials from staff and the community served the zoo well. The group took on big projects, including the acquisition of an Asian elephant. The community, including school children, got on board.

Lansing students played a central role in the effort by conducting a very successful fundraising drive among Lansing schools. The school that contributed the most won naming rights. Thousands of buttons with Herman the Mexican burro on them were sold. Additional projects to raise money included candy and bake sales. Bingham Elementary earned the most and named the new elephant Bingo, after their school. Not surprisingly the children of Lansing felt an ownership of Bingo, for they had “bought an elephant,” and they fell in love with her. 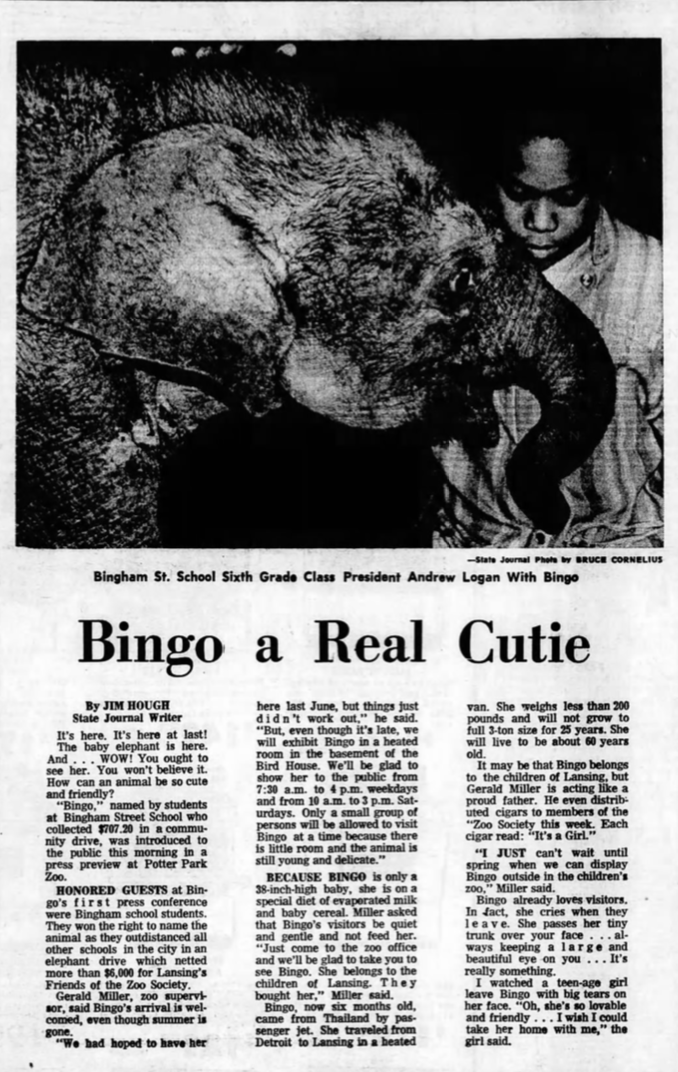 Bingo, a young female Asian elephant, arrived in the fall of 1972. The acquisition and handling of elephants in zoos were very different in those days. It was reported that Bingo was taken from the wild in Thailand and was six months old, 38 inches high, and weighed less than 200 pounds. She was fed a special diet including evaporated milk and baby cereal. 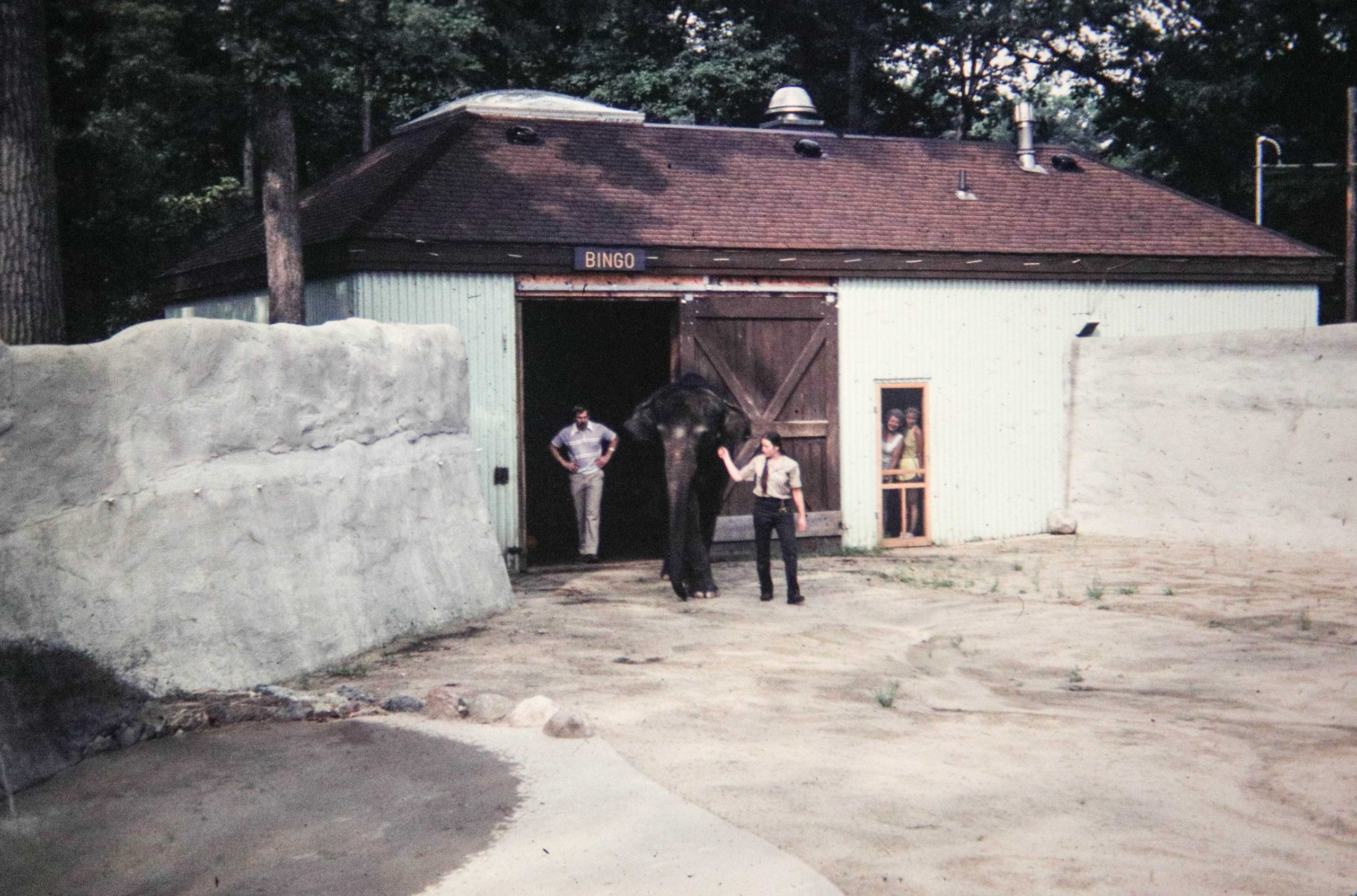 It was too cold for her to be outside in Michigan at that time of year, so she moved into a heated room in the basement of the Bird House for the winter. Small groups of visitors were allowed to see her at a time, and many came. In the spring she moved to an outdoor display area during the day and returned to a barn at night. She continued to grow and in a couple of years needed new living quarters. In 1975 the Associated Builders and Contractors stepped up to provide a new year-round home and an outdoor play area.

At the time she was a sensation and very loved by the community.  These days, her status as a lone elephant in a relatively small space with close contact with visitors is no longer acceptable in zoos accredited by the Association of Zoos and Aquariums.  Very strict and extensive guidelines are in place and must be met by any AZA facility housing elephants.

Bingo was known to get into mischief if given the chance. One of her keepers recalled the time when Bingo was still small enough to winter in the basement of the Bird House. Keepers left at the end of the day. She broke the hasp off of her enclosure and went exploring in the basement. When the keepers arrived in the morning, which happened to be Christmas Eve, they found the large sand pile there strewn all over, broken tools, and Bingo innocently waiting back in her pen for her morning bottle. 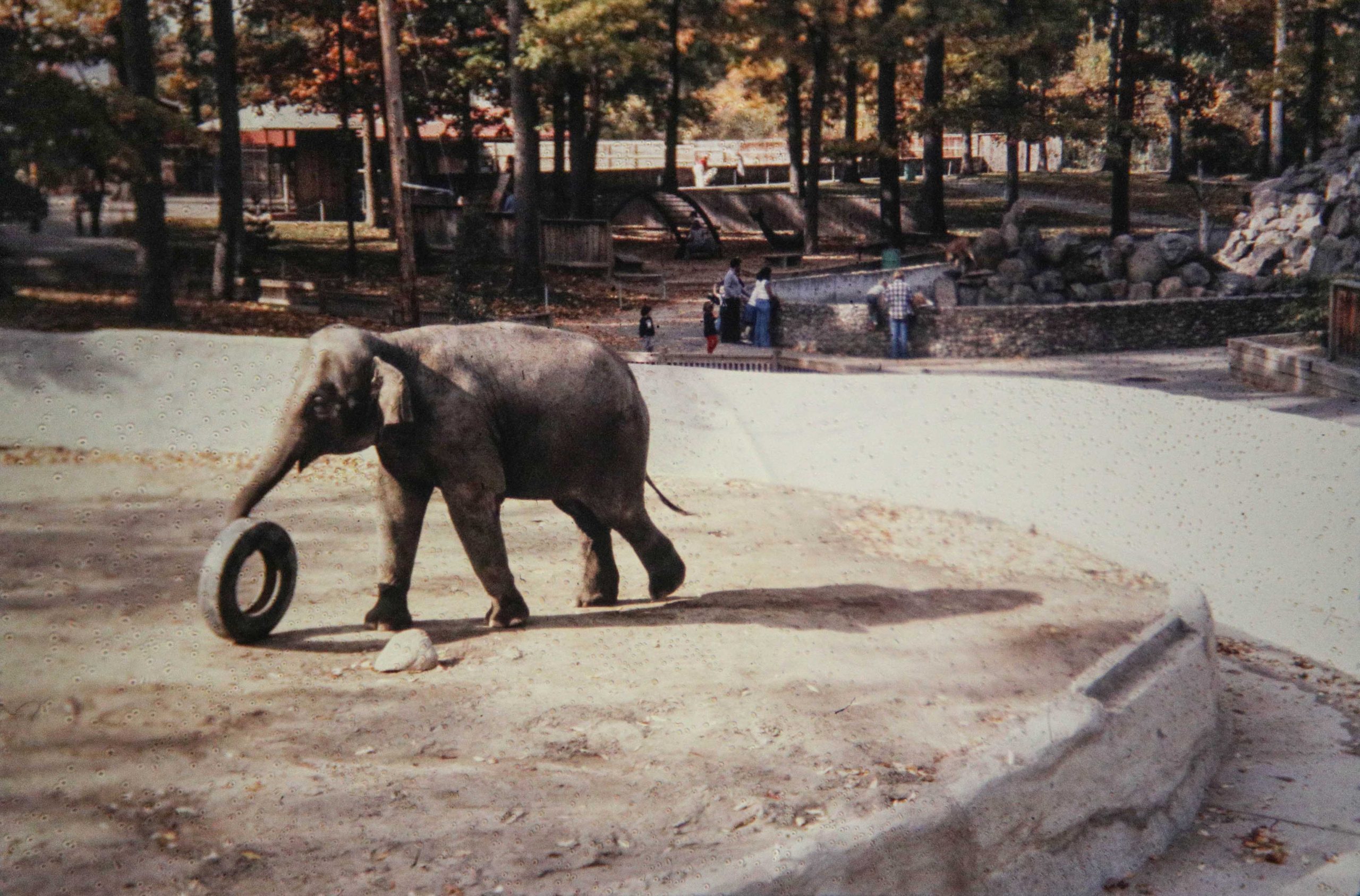 Bingo also had a habit of consuming non-food items. That never caused a problem until 1979, when she swallowed a baseball-sized rock, and it became lodged in her throat. For weeks after surgery to remove the rock, she was tube fed through an incision in her neck by keepers and appeared to be on the road to recovery. Concerned children sent get-well cards and many people came to visit. Sadly, and unknown to the doctors, Bingo’s esophagus muscles had been damaged from the surgery so that food particles could be inhaled into her lungs instead of forced into the stomach. This happened when she was able to feed herself, and she developed pneumonia and died. 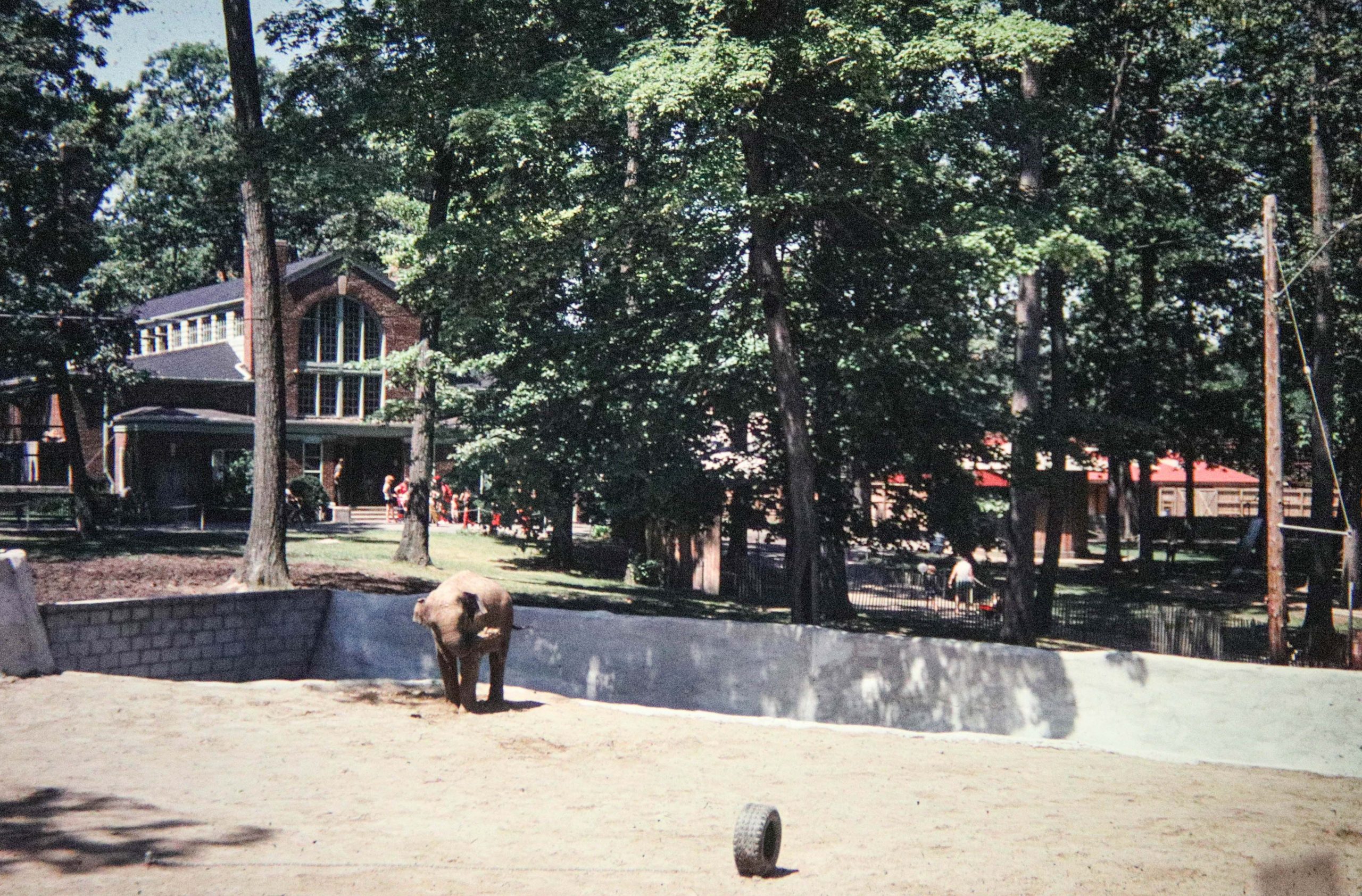 The community loved Bingo and was very sad when she passed away. Very soon there were calls from the community to acquire another elephant. Fundraising began, and zoo staff located an available elephant. Three months later Tombi, a young female African elephant, arrived.

The Bingo experience taught the community to dream big and get involved. One of those Lansing students who sold Herman buttons to raise money to bring Bingo to the zoo looked back as an adult to speak of the ownership that came from that experience:

“More than 20 years later, I get a warm feeling every time I take my toddlers to the zoo. I remember that time and the small (yet important) part that I played in helping make the zoo what it is today.”  (Lansing State Journal, 1998)

Do you have a story about the elephants at the zoo? Share your story. Go to “Contact” on this website and leave a message in the drop-down menu to “What is your message regarding?” – “Story Submissions for Zoo Centennial.” Please include the decade or general time frame that applies to your story