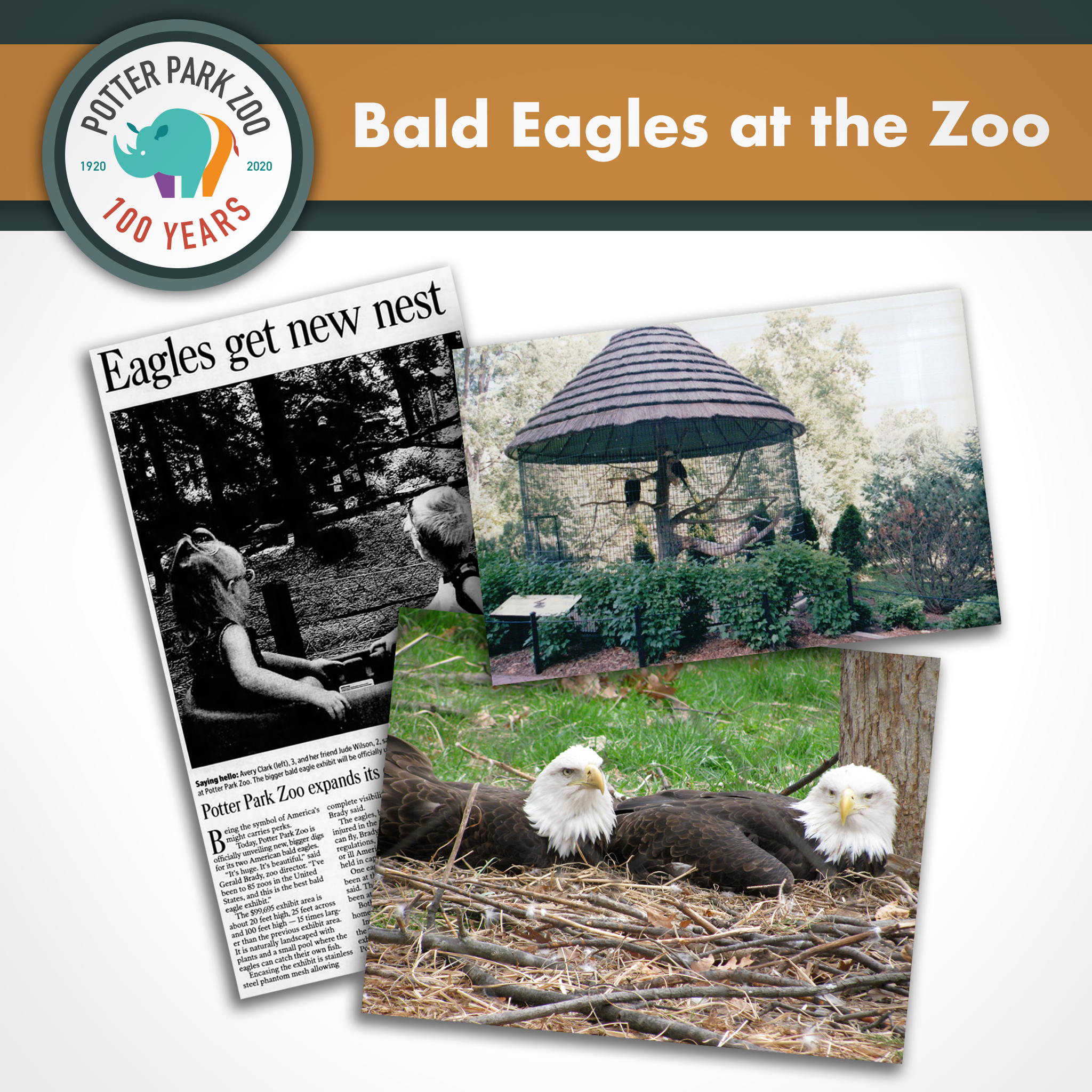 The bald eagle exhibit at Potter Park gives a nod to our National Bird, and helps us share this species’ remarkable conservation success story. Fifty years ago, eagle populations had plummeted from the contamination of their food chain by the pesticide DDT. The federal government banned its use in 1972, and the Endangered Species Act of 1973 provided habitat protections. Bald eagle numbers grew, and in 2007 the bald eagle was removed from the federal Threatened and Endangered Species list. As part of ongoing protections,  federal permits are required to exhibit bald eagles in zoos. Captive eagles must also be non-releasable due to health issues or prior accidents – a wing injury from a poaching attempt or automobile impact, for example. In accordance with these regulations, Potter Park’s own eagles are rescues with conditions that prevent their return to the wild.

It is not clear when bald eagles first came to Potter Park. Some of the earliest mentions come from the Lansing State Journal in 1921, where it was reported that the zoo’s eagle would be on display at the Michigan State Fair. This was followed up with an article in 1926 stating that three young eagles were coming to the zoo. Potter Park’s own records begin in 1960 with a bird named Sam. Sam was kept at Fenner Nature Center, but was cared for daily by visiting Potter Park zookeepers. Sam lived until 1993. 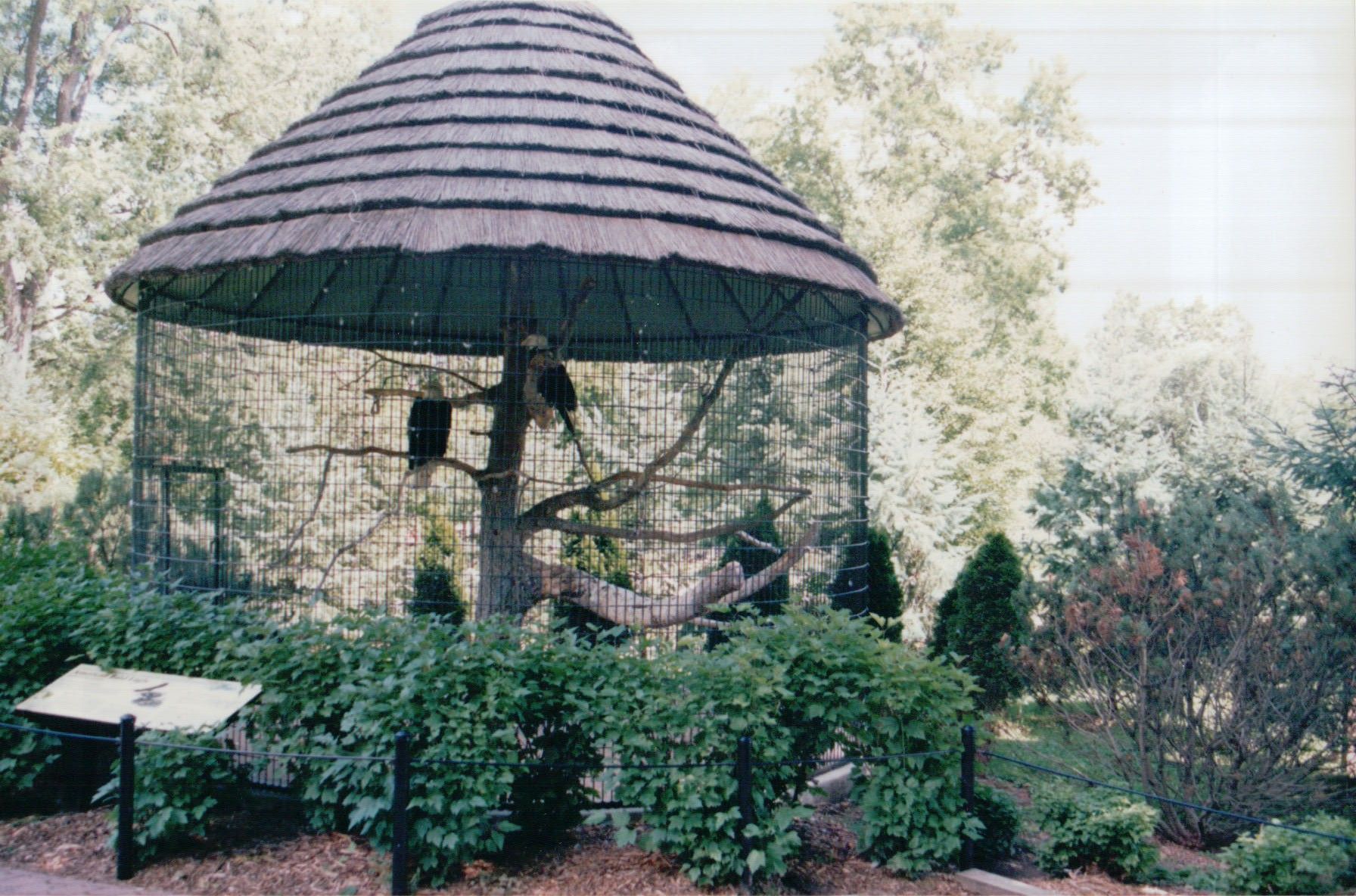 In the early 1990s, the zoo acquired a male whose name is unknown, and a female named MT. They shared a corn-crib-style enclosure near the current Nature Play area at the back of the zoo. After a decade, the male died, and another female bird joined MT. 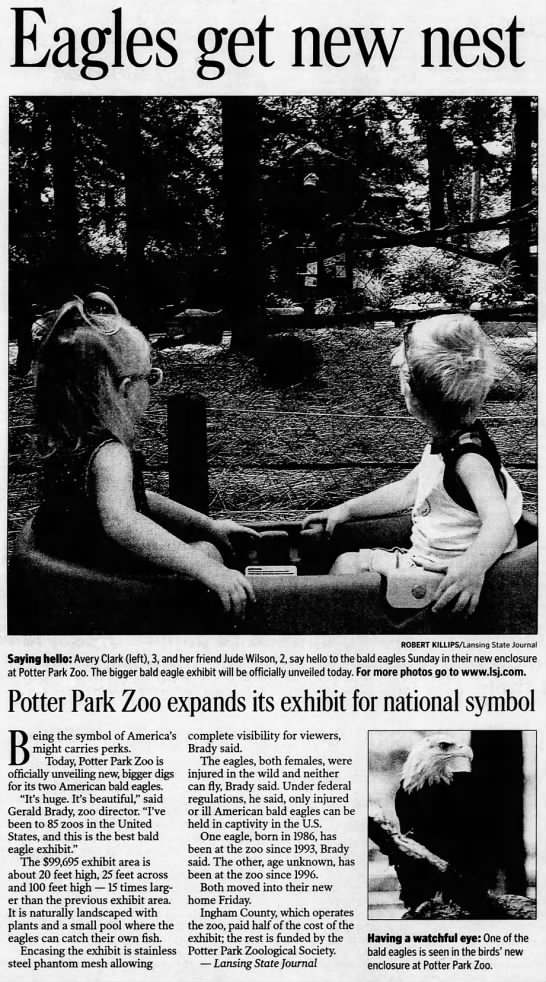 An improved exhibit was built in 2008 near the zoo entrance with much more space and branches for perches, grass, and a small pool. A mesh enclosure provided extra visibility for visitors and photographers. The two females moved from the old enclosure to the new space. Luca, a young male that had acquired its white head and tail, joined the pair in 2011.

In 2012, something unexpected happened – the two original eagles built a rudimentary nest, and an egg was laid. Normally bald eagles build large nests high up in trees, but because the two couldn’t fly, they did what they could on the ground. While the nest was not a “regulation” eagle structure, it was clear that instincts were at work. Because the parents were not capable of raising a healthy offspring to be released in the wild, staff knew the egg could not stay in the nest, so it was removed and replaced with a wooden decoy (which the females duly accepted). 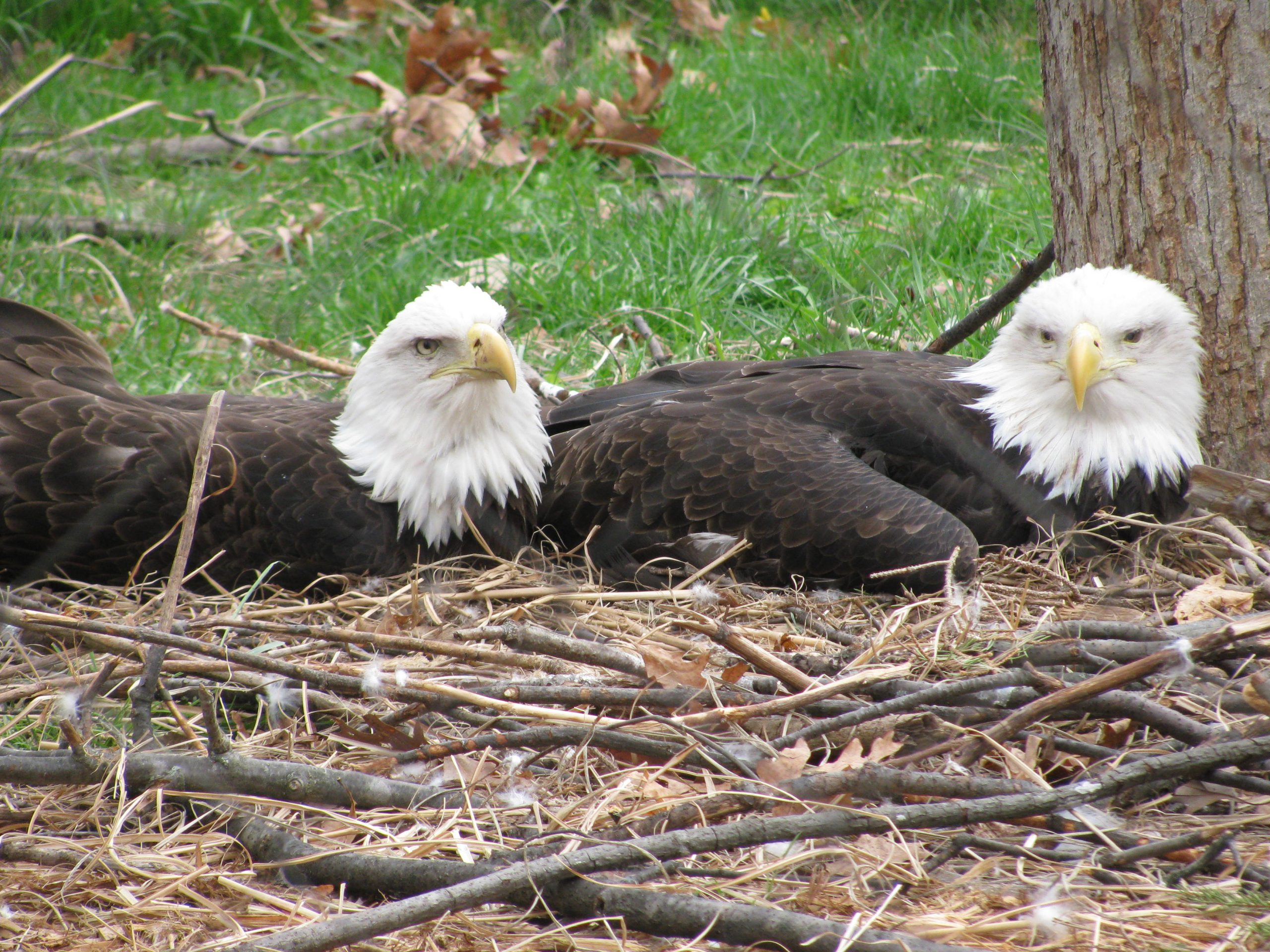 Because close observation of eagle incubation and nest maintenance is rare, this was a particularly fascinating time to observe the bald eagles at the zoo. The females were very protective, keeping Luca and zookeepers at a distance. One member of the pair remained over the nest at all times – even during rainstorms. Once the expected hatch date had passed, the “egg” was removed from the enclosure, and the females resumed their pre-egg routines. A couple of lingering questions continued to puzzle zoo staff – Could Luca actually breed with his injuries? Was it unusual for the two females to incubate the egg together?

Some answers were revealed when MT’s partner passed away in 2013. Tests taken at the necropsy revealed that she was actually a he! The eagle had been incorrectly assigned a sex based on its size (females are generally larger than males). By 2013, when DNA testing was more common, the truth came out. In light of this new information, circumstances surrounding the egg became clearer – including the birds’ close relationship and their cooperative approach to nesting.

In 2017, MT passed away, and Hal – a male – joined Luca in the exhibit. The two continue to occupy the enclosure today. Unlike Luca, Hal can fly for short distances, so he can usually be spotted higher up in the exhibit. 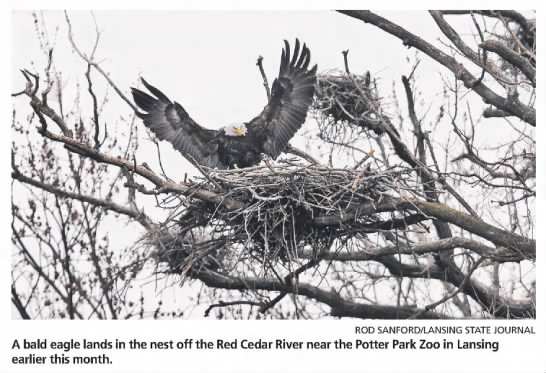 In the spring of 2015, the bald eagles’ conservation story came to the zoo in a different form when a nesting pair of eagles set up a home along the river near Potter Park  – Ingham County’s first in many years. They abandoned the nest that season, but have moved to different locations along the river in subsequent years and raised multiple eaglets successfully. An eagle can still be seen occasionally scouting for prey on a dead tree by the river. Try looking the next time you drive into the park!

Do you have a story about the bald eagles in the zoo or in the park? Share your story. Go to “Contact” on this website and leave a message in the drop-down menu to “What is your message regarding?” – “Story Submissions for Zoo Centennial.” Please include the decade or general time frame that applies to your story.