Rhinos Become the BIG Species at the Zoo

In the 1970s and ‘80s Potter Park Zoo had two singleton elephants at different times. There will be more on that topic in a later blog. The relevance to rhinos is that the zoo world was changing in its knowledge of optimal elephant care, that is, elephants need other elephants and lots of space. In 1989, after consultation with elephant experts from other zoos, Potter Park Zoo officials decided to relocate our elephant to the Indianapolis Zoo, where she could be part of a herd and have more space – and where she still lives happily. The former elephant exhibit was reworked to be an exhibit for the solitary black rhinos.

In 1990 Potter Park’s first black rhino, a male named Mashaki, arrived. Plans to acquire a female for breeding fell through. Instead, the Eastern Black Rhino Species Survival Plan (SSP) recommended that Mashaki breed with a female in San Francisco. He left and sired at least one calf there.

SSPs are the way that zoos accredited by the Association of Zoos and Aquariums (AZA) pair individual, unrelated animals across AZA-accredited zoos as they seek to maintain healthy and genetically diverse zoo populations of various species. Participating zoos work cooperatively for the good of the species. This is why a favorite animal may need to be sent to another zoo. 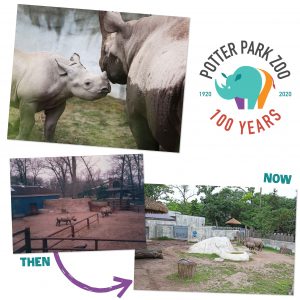 Ebony, a female from the Caldwell Zoo in Texas, and Jimma, a male from the San Diego Wild Animal Park, arrived in 1994 on an SSP breeding recommendation. The Ebony Jimma match was not a productive one, so SSP arranged changes to pair the two with proven breeders. In 2005 Jimma moved to the Cleveland Zoo, where he produced at least two offspring, and Spike, a father in Cleveland, came here to pair with Ebony. Unfortunately, Ebony developed complicated health issues and Spike died unexpectedly in 2008. Ebony followed a few months later.

The Next Breeding Recommendation

The black rhino exhibit has been renovated several times over the years, most recently in 2011, when the barn and yards were significantly expanded.  At that time, Doppsee, a female from the Sedgwick County Zoo in Kansas, and Jello, a male from Zoo Miami, arrived for breeding. This time Jello’s seizures manifested themselves and breeding attempts turned to a focus on Jello’s medical care. He passed in 2015 after animal care staff dedicated every resource possible to his care and recovery.

Mom Doppsee and son Jaali are special rhinos. Doppsee has a very trusting relationship with her zookeepers. This bond has facilitated training that allows zoo staff to better care for her while she is awake – with less stress for her and staff. Keepers can obtain weights, provide foot care, and give mud baths in the winter. Medical staff can draw blood, give shots, and perform ultrasounds. Doppsee has modeled this cooperative behavior for Jaali. He has followed his mom’s lead and also enjoys keeper attention and a good scratch. This bodes well for his future care.

Fundraising events for rhinos have been big at Potter Park since they first arrived in 1990. That year marked the first 5K Rhino Walk to raise money for rhinos. This event, under various names – Rhino Walk-Run, Rhino Romp – continued for twenty years. The Potter Park Chapter of the American Association of Zookeepers (AAZK) began participating in the annual Bowling for Rhinos fundraiser for rhino conservation in 2014 and has continued since.

Do you have a story about rhinos at the zoo? Share your story. Click here and in the drop-down on this page that says “What is your message regarding?” and select “Story Submissions for Zoo Centennial.” Please include the decade or general time frame that applies to your story.