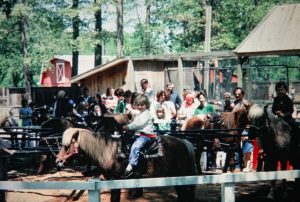 One hundred years ago Potter Park was thriving in the budding park system of Lansing. City leaders were correct in their prediction that its natural beauty among the oaks and the Red Cedar would be a magnet for visitors. It became a go-to location for picnics, reunions, and canoeing. Visitors arrived at the park on the outskirts of the city by streetcar, auto, or perhaps horse, as early plans for park improvements called for hitching posts.

An assortment of animals was on display in 1920. Among them the Lansing State Journal reported on a badger donated by a young boy, a bald eagle that had been on display at the State Fair in Detroit, and an alligator that was purportedly “a veteran 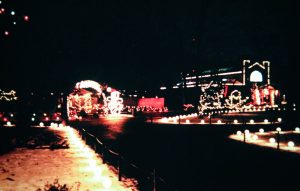 of the Mexican or some other war, having lost one leg in the service.” This was a park with some animals and bore little resemblance to what we now think of as a zoo, but the people came and the zoo grew.

Meanwhile out in the park, the Dakin Street Bridge was completed in 1920 (now gone) and provided another entrance to the park that fed into the large pavilion, now known as the Tiger Den, which was built in 1921. Made possible by another donation from James and Sarah Potter, it accommodated large groups for picnicking and dancing, provided an escape from the rain and hot sun, and housed public restrooms. Note: A bronze plaque was placed on the pavilion in appreciation of the Potters’ generosity and is still there. 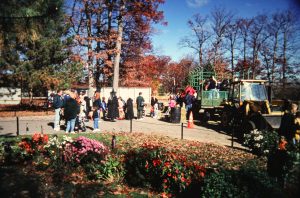 Through the years many family traditions have been built around Potter Park and the zoo. Perhaps it was a regular picnic, a family reunion, a visit to a favorite animal, or a special event. Share your story. Click here and in the drop-down on this page that says “What is your message regarding?” and select “Story Submissions for Zoo Centennial.” Please include the decade or general time frame that applies to your story.