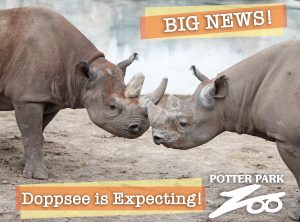 The Potter Park Zoo team is ecstatic to announce that Doppsee the critically endangered black rhino is pregnant! Fecal samples were collected from Doppsee for many months and sent to CREW (Center for Conservation and Research of Endangered Wildlife, Cincinnati Zoo) for analysis. Based on her hormone levels we are confident she is pregnant. Keeper staff has been regularly training with Doppsee to acclimate her to rectal and transabdominal ultrasounds and this has enabled Dr. Ronan Eustace to confirm pregnancy via ultrasound. While we likely won’t be able to see a fetus on a transabdominal ultrasound for a few more months, we have confirmed fluid in her uterus via rectal ultrasound, which is indicative of pregnancy!

According to the International Union for Conservation of Nature and Natural Resources (IUCN) there are only 5,000 black rhinos remaining in the wild and only about 60 at zoos in the United States. With wild rhino populations declining, it is imperative for the zoo populations to be diverse and sustainable. A successful pregnancy would mean the world to Potter Park Zoo, its employees, and all that visit, but it would mean even more to the black rhino population as a whole.

Last summer was a busy time for the rhino team at Potter Park Zoo. We spent many months introducing our two rhinos, Phineus and Doppsee, with the hopes that they would breed. More complex than just putting two 2800 lb. animals in the same yard together, breeding introductions required a lot of intricate planning and coordination to keep everyone safe. We monitored Doppsee’s estrus cycle by watching the behaviors of both of the rhinos so we could estimate the dates she would readily accept his presence. We knew from the fecal hormone testing that Doppsee’s cycle averaged 23.6 days, and when we thought their behaviors were indicating she might be coming into estrus, we put the rhinos together. 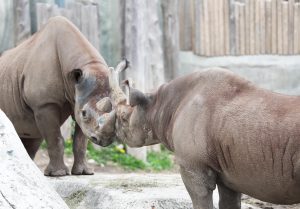 Under the watchful eyes of keeper staff, prepared to intervene if necessary, the rhinos spent multiple times together in the same space. Rhino courtship and breeding can be aggressive, with the rhinos often charging and sparring with each other. When Doppsee was finally ready to accept Phineus’ attention, she would allow him to rest his head on her rump before finally mounting her. Though he successfully mounted her over the course of multiple sessions last summer, we knew that it would take months before we could confidently announce she was pregnant. Doppsee and Phineus bred on May 11, June 4, and again on August 25, 2018.  Due to weather and other constraints, we were unable to introduce the rhinos again in the fall. However, it turned out to be unnecessary.

Animal care and veterinary staff will continue to monitor Doppsee throughout her pregnancy. Potter Park Zoo will keep everyone updated through regular posts on our Facebook, Twitter, Instagram and blog as we continue to learn more about this incredible pregnancy!