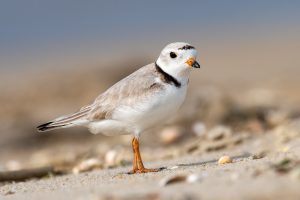 The piping plover, a small shorebird driven to near extinction in Michigan in the 1980’s, is on the road to recovery thanks to help from the Great Lakes Piping Plover (GIPIPL) captive-rearing program and Potter Park Zoo’s animal care team.

For many years, zoo staff have participated in this important conservation effort working to ensure piping plovers continue to nest along the shores of the Great Lakes. The species was listed as endangered under the Endangered Species Act in 1984.

In this spring’s effort Potter Park Zoo’s Animal Programs Manager Sarah Foote spent a week aiding in the rearing of these small birds.

“It has been an honor to work on this restoration effort for the last several years,” said Foote. “While populations can be found in the plains states and along the eastern seaboard, they have struggled in Michigan and anything I can do to help the population is very rewarding.”

Foote said that through a dedicated program with support from more than 23 federal and local organizations, the population of plovers along the Great Lakes has increased to more than 70 nests per year, up from a low of 10 to 14 nests. The population has also begun to expand outside of Michigan, and nests have been recorded in Pennsylvania, Illinois, Wisconsin and Ontario. In fact, 2018 marked the first time in decades that piping plovers nested on all five of the Great Lakes. 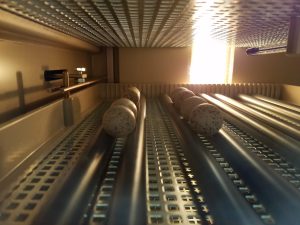 Since both piping plover parents incubate the eggs, the loss of one parent can be fatal to the nest. If a parent has been taken by a predator, or the nest washed out during a storm, the eggs are collected and transported to the University of Michigan Biological Station in Pellston, which has been the home of the captive-rearing facility for decades. Managed by the Detroit Zoo, the captive-rearing program has successfully hatched and reared piping plover chicks since 2002. Following specific protocol, eggs that arrive at the station are candled, weighed, and set for incubation. Using data collected by the monitors, as well as their knowledge of the stages of incubation, the captive-rearing staff have a pretty good idea of when hatching should start for each clutch of eggs.

Just out of the egg, piping plover chicks have the appearance of two damp cotton balls on a pair of toothpicks. Despite their 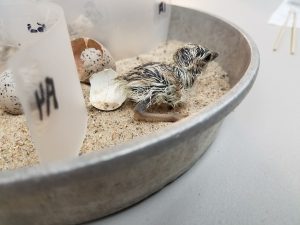 petite size and less than inspiring appearance, the chicks are up and moving within an hour of hatching. Piping plover chicks are precocial, meaning they can move and forage on their own shortly after hatching. This is true of many ground nesting birds although they continue to rely on their parents for warmth and protection.

“Caring for an endangered species, especially one that will be released back into the wild, is exceptionally gratifying but comes with a great deal of pressure,” said Foote. “Due to the circumstances that lead to their transfer to the bio station, eggs may be compromised and beyond our help. Lone eggs don’t hatch as successfully as do those still with their siblings, as the peeping of the other hatching chicks helps move the process along.”

Foote had the interesting experience of helping with a special hatch this spring.

“This year we had a lone egg that required assistance hatching, which meant peeping at the chick and very slowly removing bits of shell until it popped free, nearly 12 hours later,” she said.

Although the chick hatched, Foote explained this isn’t a guarantee.

“Even when chicks have hatched successfully there is always the chance that something unexpected will happen. Unfortunately, salvage captive-rearing isn’t a miracle fix-all and those losses can be hard,” she said.

For the chicks that hatch and thrive, human interaction is kept to a minimum, limited to obtaining weights and transfers between the cabin and the lakeside pen. During catch-ups the team members play alarm calls, so the chicks identify humans as something to avoid. As they grow, they spend increasing amounts of time outside in the lakeside pen, where they can hunt any native insects that wander in. Eventually, the chicks graduate to staying outside overnight.

“We are still like worried parents, and we check on them several times over night,” said Foote. 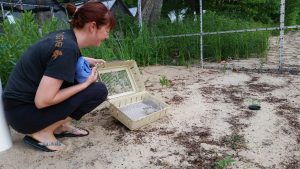 Piping plovers fledge around 28 days. Staff know they are nearly ready for release when they begin flying in the lakeside pen and become more and more difficult to catch. At this point the field staff begin the pre-release process, including putting permanent identification bands on their legs and gathering any last bits of data. Within the next few days, the nearly adult chicks are released. If there are no similarly aged chicks at their home beach, the youngsters are released at Sleeping Bear dunes, where MDNR and others can monitor their progress.

“It is an amazing feeling, watching young birds you’ve cared for run out of the carrier and back into the wild,” said Foote. 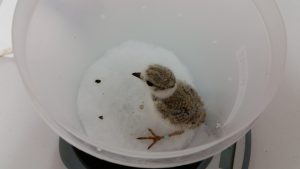 Salvage captive-rearing is a last-ditch effort to save eggs that would otherwise die and the goal is always to release all captive reared piping plovers back into the Great Lakes population. In the 2022 season there were 71 unique pairs of birds. Field staff banded 186 wild chicks from 65 broods and the captive-rearing program incubated and hatched 11 chicks from nests in Michigan, Wisconsin and Pennsylvania. The biggest news of the season is that 137 chicks fledged, the most ever fledged since piping plovers were listing in 1984. To learn more about this program visit https://www.greatlakespipingplover.org/.