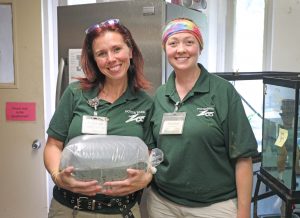 Zookeepers hold a bag of tadpoles that have been prepared to be shipped to Puerto Rico. (Kaiti Chritz | Potter Park Zoo)

Potter Park Zoo recently shipped nearly 2,000 Puerto Rican crested toad tadpoles to be released in the wild in Puerto Rico, an essential step in securing a viable population of this critically endangered species.

“Our mission is to inspire people to conserve animals in the natural world and we take pride in having a part in helping to conserve wildlife around the world,” said Potter Park Zoo Director Cynthia Wagner. “One of the ways we are working to make a difference is through participation in the Puerto Rican crested toad Species Survival Plan (SSP) for the last ten years.” 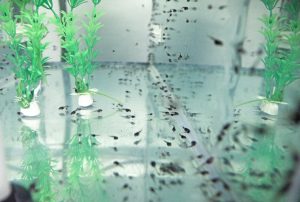 In 1984 the Puerto Rican crested toad became the first amphibian to receive SSP status within the Association of Zoos and Aquariums. In addition to the captive breeding program, the SSP recovery goals include the protection and restoration of existing habitat, island-wide educational programs, and the creation of new breeding ponds. Potter Park Zoo has sent tens of thousands of tadpoles to Puerto Rico as members of the SSP.

Puerto Rican crested toads require a very specific environment for breeding when in human care and the goal is to replicate the spring and fall rainy seasons in Puerto Rico. To achieve this animal care staff cool the toads to 66° for one month to promote gamete development. During this time they are in torpor and do not eat. When the month has passed, the toads are warmed to 82° and they begin feeding again. To prevent the spread of disease they are given daily anti-fungal baths for a week prior to the breeding event. 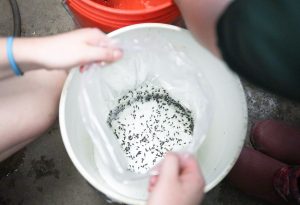 The Puerto Rican crested toad Species Survival Plan sends guidelines to the zoos for packing and shipping the tadpoles to keep them healthy and safe. (Kaiti Chritz | Potter Park Zoo)

Toad pairings are recommended by the SSP coordinator based on genetics and Potter Park Zoo is typically asked to breed several pairs of toads each year. While some toads will breed without any assistance, most require hormone injections to encourage egg laying and fertilization. The tanks used for breeding are equipped with rain bars and Puerto Rican crested toad calls are played around the clock while pairs are in the breeding tanks. Once eggs are laid, the adult toads are removed from the tanks and returned to their individual holding tanks.

Eggs develop quickly and tadpoles hatch after only 24 hours. While adult toads are carnivorous, tadpoles eat algae and other plant material. They remain at Potter Park Zoo for approximately a week, giving them time to grow before they are shipped to Puerto Rico for release. 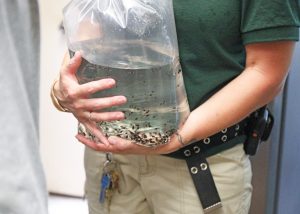 Puerto Rican crested toad tadpoles begin morphing into young toads approximately 2-3 weeks after hatching. Since these toads breed in temporary ponds in the wild, their tadpoles need to morph into toads quickly, before the pond dries up. However, it may take many years for them to reach their adult size of 2-3”.

Potter Park Zoo was again successful in 2019 and animal care staff looks forward to continued participation in the breeding program.  A handful of tadpoles were kept at Potter Park Zoo, to bolster the breeding population in AZA accredited zoos. While the breeding colony is not accessible to zoo visitors, guests can visit other Puerto Rican crested toads on exhibit in the Bird and Reptile building.