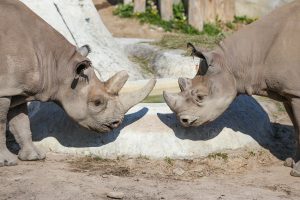 Black rhinos Doppsee and Phineus interact during a planned and monitored introduction at Potter Park Zoo in Lansing, Michigan. Black rhinos are critically endangered with only an estimated 5,000 left in the wild.
Kaiti Chritz | Potter Park Zoo

If you’ve spent much time at the zoo this summer, you may have noticed that for a few days each month the area around the rhino exhibit has been blocked off with caution tape. Why would zoo staff restrict access to the rhino exhibit and why were there so many zookeepers and volunteers paying such close attention to the rhinos? The answer is simple – our eastern black rhinos, Doppsee and Phineus, have been spending time together in hopes that they mate.

Doppsee, the female, arrived at Potter Park Zoo in 2011 from Kansas, and she quickly became one of the most popular animals at the zoo. She personally meets thousands of guests each year and helps tell the story about the importance of conservation. Doppsee is not only an incredible ambassador for her species, she also has very valuable genetics in the captive population of eastern black rhinos.

Potter Park Zoo is an active participant in the eastern black rhino Species Survival Plan (SSP). This plan provides recommendations for breeding and transfers for rhinos located in Association of Zoos and Aquariums (AZA) accredited facilities across the country. These recommendations attempt to maximize the genetic diversity of the black rhino population in zoos. Currently there are only 58 eastern black rhinos in zoos. Recent statistics show that there are only 2.9 black rhino births in the United States each year and this low number means that each successful breeding is vital to the health and diversity of the population.

Although there wasn’t a suitable partner at Potter Park Zoo for several years, keepers were preparing for the possibility of a breeding recommendation for Doppsee. Every day the dedicated Potter Park zookeepers collected fecal and urine samples from Doppsee. These samples were sent to a lab at the Cincinnati Zoo’s Center for Conservation and Research of Endangered Wildlife (CREW), where they were analyzed so staff could understand both her hormone levels and her estrus cycle. Through this study it was found that she cycles approximately every 23.6 days and that the keepers had been accurately predicting her estrus cycle based on her behavior. With this knowledge in hand, zoo staff were eagerly waiting for a recommendation from SSP to breed Doppsee with a male rhino. 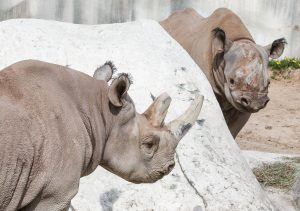 After careful consideration, the eastern black rhino SSP decided on a partner for Doppsee and that Phineus, a nine-year-old male from Caldwell Zoo in Tyler, Texas was a good genetic match. He was recommended to come to Potter Park Zoo to breed. Phineus arrived in Lansing April 3, 2017. After a routine quarantine period to ensure he was healthy and a few months for Phineus and the zookeepers to get to know each other, the rhinos were finally prepared to have their first introduction.

Zookeepers, the general curator and the veterinary staff carefully planned the initial introduction of Phineus and Doppsee for the fall of 2017. Eastern black rhinos are normally solitary animals and only come together for breeding. The interaction between a male and female during introduction can be violent, and there is typically a lot of vocalization, sparring, and chasing. Though always prepared to intervene if necessary, experts in rhino introductions believe it is necessary to let them go through this courtship phase barring major injury. The first introduction took place in October 2017 and to the delight of all who were involved, breeding did occur for the first time in Potter Park Zoo history between two black rhinos. 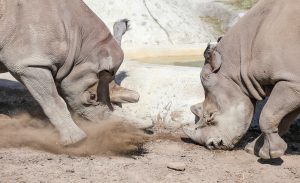 Black Rhinos Doppsee and Phineus interact during a planned and monitored introduction at Potter Park Zoo in Lansing, Michigan. Rhinos normally solitary and only come together for breeding. The interaction between a male and female rhino can be violent during an introduction and there is typically a lot of vocalization, sparring, and chasing.
K. Chritz | Potter Park Zoo

Black rhino gestation takes 15 to 16 months and the initial indication of pregnancy can take several months. With weather conditions worsening, introductions were halted after their initial success and all eyes were on Doppsee to monitor her for any behavioral or hormonal changes throughout the fall and into winter.

As the months progressed it became evident to the keeper staff that Doppsee was still coming into estrus every month and that pregnancy was not likely. This was confirmed through urine and fecal testing. If pregnant, Doppsee’s progesterone levels would increase at around the third month of pregnancy and continue to remain high through out gestation. Since she was not confirmed pregnant, the decision was made that introductions would begin again in the spring when the weather improved.

As spring approached plans were made to continue introductions each month until Doppsee was confirmed pregnant. After careful calculations and a great deal of behavioral observations, it was decided that the rhinos would be introduced for a second time in April. Unfortunately, after a few days together, the weather once again took a turn for the worse and the rhinos were separated before they had a chance to breed. Doppsee and Phineus were introduced for a third time in early May. This time the weather held, and the rhinos again bred on May 11. Most recently, Doppsee and Phineus were together the first week of June and were observed breeding on June 4. The entire Potter Park Zoo staff has been delighted with the ongoing success of the rhino introductions.

Rhino introductions have continued based on the estimated estrus dates through out the summer and early fall. In late August, the rhinos were observed breeding again when Doppsee was showing signs that she was in estrus. When introduced to Phineus again in September, animal care staff did not observe those behavioral cues that she was in estrus. No breeding attempts made in September. It is the hope of zoo staff that Doppsee is pregnant, but we cannot confirm this until we are able to complete a hormone analysis. With the most recent breeding attempt, that could mean waiting until the end of December for a hormone test.

We will continue to introduce the rhinos until we are able to confirm her pregnancy through fecal hormone analysis.

While we work to add a young black rhino to the current zoo population, we are also doing our part to contribute to the success of the wild populations through financial support of conservation efforts. Potter Park Zoo participates in World Rhino Day and all proceeds from the event go to the International Rhino Foundation. 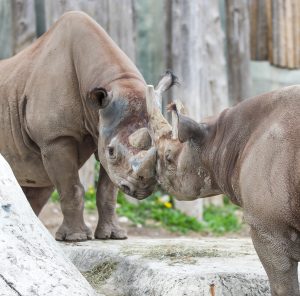 Black rhinos are disappearing from the earth at an alarming rate and current estimates put the wild population of black rhino at less than 5,000. Compared to the estimated 65,000 rhinos alive in 1973, it puts the plight of the black rhino into focus. Of those 5,000, only about 740 are of the subspecies eastern black rhino. Both Doppsee and Phineus are eastern black rhinos.

Rhino numbers are declining largely due to poaching with over 1,000 rhinos killed last year alone. Black rhinos are poached for their horns, as some cultures believe rhino horn has medicinal qualities and are often viewed as a status symbol. Rhino horn is made of keratin, the same substance that makes up your hair and fingernails. Poaching remains the biggest threat to rhino extinction throughout the world.