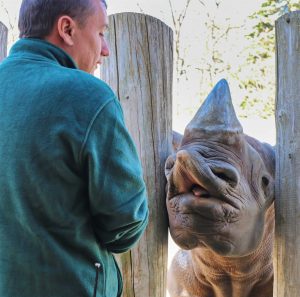 Potter Park Zoo (PPZ) has been home to the critically endangered black rhinos since 1990. Our resident rhinos, Doppsee and Phineus, were recommended to breed through the eastern black rhino SSP (Species Survival Plan) based on their genetic diversity. Recently, we had the pleasure of announcing Doppsee is pregnant and due at the end of this year.

Phineus is Potter Park Zoo’s male black rhino. He was transferred to Lansing from the Caldwell Zoo, located in Tyler, Texas in April of 2017. Phineus will turn 12 years old September 27, 2019. The keeper’s favorite trained behaviors, which Phineus had before arriving to Potter Park, are sit and lay down. Since he’s been at PPZ he has learned many new behaviors such as ‘foot’ meaning he’s able to put his front and back feet on a block and ‘toe’ meaning he angles his toe to the ground letting his keepers see the bottom of his feet. These are very important behaviors because we look at their feet daily ensuring they are in good condition. Training is always voluntary for all the animals at PPZ and they have the choice to participate or not. When Phineus first arrived he was cautious of keepers and his surroundings. As we spent time with him, and he adapted to life at Potter Park Zoo, he became a favorite to all his caretakers. Some of Phineus’ favorite treats are bananas, peanut butter, and browse. 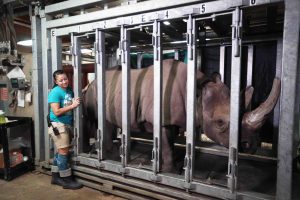 Doppsee has been at Potter Park Zoo since 2011 arriving from Sedgwick County Zoo, Kansas. She was born July 6, 2007 making her 12 years old. Since Doppsee has been here she has learned an array of behaviors including all the previously mentioned foot behaviors that Phineus knows, voluntary blood draws, and ultrasound training. Doppsee is a very docile and tractable animal who learns quickly and readily participates in her training sessions with her keepers. She also is our largest ambassador animal as she meets many children through our Big Zoo Lesson education programming. When it comes to enrichment, Doppsee spars with large, hanging items such as barrels and PVC tubes. She also spends her time eating browse and crushing watermelons with her impressive horn.

In the wild, black rhinos are primarily solitary animals, meaning they live alone, usually only coming together for breeding purposes. There are about 5,000 black rhinos left in the wild and, according to the eastern black rhino SSP Breeding and Transfer plan, on average in the last ten years, there are between one and two black rhino calves born in zoos every year. This means Doppsee and Phineus’ calf will be extremely important to the population. When a calf is born, mom rears the calf on her own for two to four years. After about two years, mom begins weaning the calf in preparation for potential breeding opportunities.

Once born, the calf will most likely stay at Potter Park Zoo for two to four years before moving to a new facility at the recommendation of the Species Survival Plan. Hopefully, the calf will play a part in increasing the black rhino population once they are of breeding age.

The Potter Park Zoo family is very eager for the new addition to arrive. This will be Potter Park’s first ever rhino calf making this a very significant birth for the zoo as well as the black rhino population. 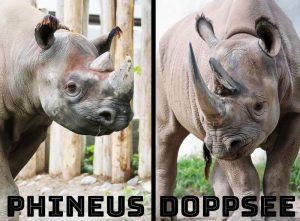 Phineus and Doppsee can be easily identified by the shape and length of their horns. Phineus prefers to keep his short and Doppsee prefers hers long. The Rhino shape their horns by rubbing in rocks and other hard surfaces.