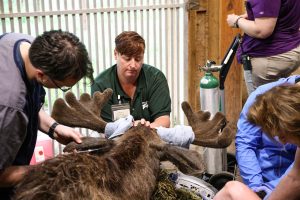 “Meeko’s conditioned worsened and although all possible treatments were attempted Meeko did not respond the treatments and the difficult decision was made to humanely euthanize him ,” said Dr. Ronan Eustace, Potter Park Zoo’s Director of Animal Health.

The cancerous mass was initially found on the leg of the five-year-old moose during a routine examination to trim hooves in the spring. When it was submitted for evaluation, it was found to be a type of cancer called a soft tissue sarcoma. Potter Park Zoo was dedicated to providing the highest level of veterinary care for Meeko as he battled this cancer. 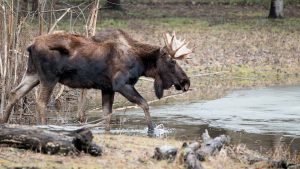 Dr. Eustace contacted Michigan State University’s College of Veterinary Medicine (MSUCVM) to inquire about an innovative and effective cancer treatment called electrochemotherapy. MSUCVM and RXVET BIOTECH helped the zoo give Meeko the treatment, and initially he seemed to improve.

Zoo staff are deeply saddened by his sudden decline in health and his passing.

“I am proud of our team and their heroic efforts to provide a different outcome for Meeko,” said Potter Park Zoo Director Cynthia Wagner.  “The zoo team is devastated by this loss and we thank everyone for their support.” 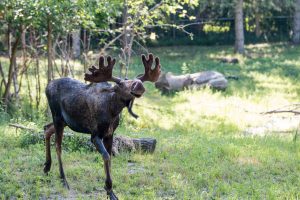