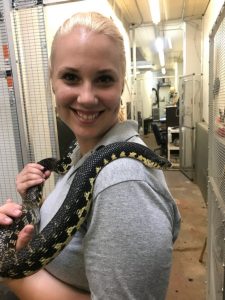 It was a great privilege to work alongside such passionate and experienced zookeepers this summer as an intern at Potter Park Zoo. I was able to learn that being a zookeeper is much more than daily animal care. This was a realistic glimpse into the career I am passionately pursuing.

Interns spend four to five weeks in each area of the zoo, and the first area I worked in was the bird, reptile and small mammal area. This area includes the black rat snake and cotton top tamarins.

My first glimpse into the complex field of being a zookeeper was watching an exhibit being made from start to finish. I was able to observe Jake, a head zookeeper, design an exhibit from start to finish and watched it change from an empty exhibit into an astonishing natural looking habitat for the blue monitor. Zoo professionals’ change exhibits through out the zoo as new research is published on the welfare of that specific species. Potter Park Zoo is a part of the Association of Zoos and Aquariums, which provides welfare standards for animals based on scientific research that all members have to follow. This ensures that the animals in our care receive the best care possible.

Research is also a large part of being a zookeeper. The behaviors learned from observing the animals are essential to providing the best care possible to the animals. I participated in an ethogram project, which studied behaviors of the cotton top tamarins. The female tamarin had an unsuccessful pregnancy and staff were planning on making adjustments to the exhibit in efforts to make the tamarins more comfortable. To know if the future adjustments were beneficial, we needed to observe their behaviors while in the exhibit before any major changes. I’d record stressful or calm behaviors over 20-minute periods. The zookeepers now have an important record of their behaviors in the original exhibit, which will help in deciding if the changes are creating an improved exhibit for the species. The hope is that these changes will create an environment that will assist in a healthy pregnancy in the future. 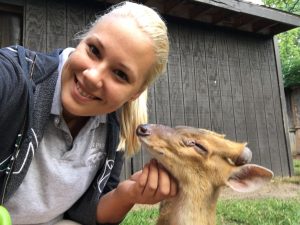 The next area of my internship was with the big cats, small carnivores, and primates. In this area, I learned how important training is to provide the best welfare and medical care to the animals. One skill that intrigued me was having tigers and lions stand on their back feet so their zookeepers could check the health of their paws more efficiently. Another skill I observed the zookeepers training was the big cats opening their mouths so the zookeepers can check for teeth and mouth abnormalities and treat problems as soon as possible. It is amazing to see such big animals per­­form advanced behaviors like these. I used the skills I learned from watching the big cat training to train chickens. During my internship, I implemented a training program to teach a chicken to station. This included four steps which gradually progressed the chicken from performing a behavior and receiving positive reinforcement to associating the behavior with the reinforcement.

The third portion of my internship involved the hoof stock area. I was able to speak to the public about these amazing animals during Zookeeper Talks. This was a highlight of my summer. Keeper talks involve interacting with the public in front of the animals’ exhibit, and answering any questions they may have about the animal. The public always loved the fun fact that Meeko’s antlers grow 1 inch every day! It was amazing noticing the difference in his rack forming from the beginning of my internship to the end.

I continued to learn about training in this area as well. Doppsee was being trained to willingly allow blood draws and foot presenting behaviors to monitor and treat any changes to her feet. Both of these skills allow Doppsee to assist in her own medical care and reduce stress to the animal. Keeper talks involved interacting with the public in front of the animals’ exhibit.

Another important part of being a zookeeper is providing enrichment to the animals that encourage them to use their natural behaviors. I completed an enrichment project which was intended for the anteater, but wound up being enjoyed by the mongoose instead. The project was a paper mache termite mound. The mongoose loved traversing the tunnels, digging for food, and tearing it apart for bugs.

Overall, I could not have asked for a better or more educational internship than the experience Potter Park provided for me. I took full advantage of my time at the zoo by observing phenomenal keepers, participating in everyday activities, researching, and completing projects for the animals. It was the most hands-on educational experience of my life and I am grateful to have spent the summer with Potter Park’s exceptional caring staff and amazing animals. ­­