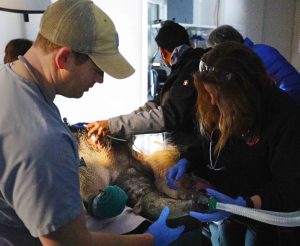 Nearly all the animals at Potter Park Zoo receive a routine examination each year. As these are wild animals, many patients must be put under anesthesia before they can be safely examined. Routine examinations help prevent disease by discovering and treating conditions before they cause animals to become sick. In some cases, animals receive special testing. Wayne the giant anteater recently had a very special exam performed at Potter Park Zoo with the help of veterinarians from Michigan State University’s College of Veterinary Medicine (MSU-CVM).

Like in humans, cardiovascular disease is a major cause of mortality in giant anteaters in zoos. As a result, a more in-depth cardiac exam was performed on the Wayne, the giant anteater at Potter Park Zoo as part of his routine health evaluation. 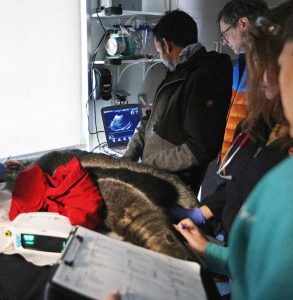 The most common heart condition found in giant anteaters is dilated cardiomyopathy (DCM), which results in an enlarged heart with thin chamber walls, and has been associated with diets deficient in taurine. Potter Park Zoo has been aware of this key nutrient to help avoid DCM in anteaters and Wayne receives a daily taurine supplementation in his diet.

For those animals prone to specific diseases, additional tests are performed to identify these conditions, as early treatment can make a difference. In some cases, Dr. Ronan Eustace, the veterinarian at Potter Park Zoo, will collaborate on zoo cases with other veterinary specialists, including Dr. Robert Sanders, a board-certified veterinary cardiologist from MSU-CVM. Dr. Sanders has a long history of collaborating with Potter Park Zoo, but this was his first time examining the heart of a giant anteater. Both Dr. Sanders and his cardiology resident Dr. Tamilselvam Gunasekaran came out for Wayne’s recent examination and evaluated the health of his heart.

Wayne’s heart was found to be normal at this time and he was found to have adequate blood levels of taurine. In addition, results of Dr. Sanders’ evaluation of the heart were sent to giant anteater Species Survival Plan veterinary advisor to help add to the database on giant anteater heart sonograms. 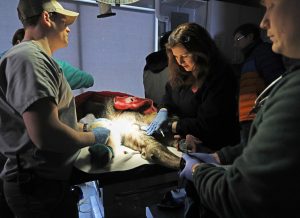 It is estimated that only 5,000 giant anteaters remain in the wild. Giant anteaters are considered a threatened species overall though in some areas they previously inhabited they are now extinct; they are hunted for food, hit by cars and driven out of habitat or burned in fires as land is converted for farming. Zoos accredited by the Association of Zoos and Aquariums (AZA), like Potter Park Zoo, are working with giant anteaters to maintain an assurance population and to support conservation programs in their home range.