In 1920, a male elk became one of the first species to find a home at Potter Park. 100 years later, we are happy to announce the return of this historically significant species to the zoo.

Potter Park Zoo welcomed one male elk (named Emmett) and two females (named Sage and Belle) to the zoo this spring. When the zoo reopens to the public, the elk will be visible in the exhibit where moose were previously viewed. While Potter Park Zoo plans to acquire orphaned moose from the Alaska Department of Fish and Game, no calves were available in 2019.  Elk were chosen as an alternative species because the three-acre exhibit is well suited for their welfare and husbandry needs. They were acquired from Amber Elk Ranch, a reputable Michigan elk farm.
Elk are the second largest member of the cervid family (moose are the largest) and reside primarily in western North America and northern Asia. They spend their time in open woodlands, coniferous forests, and open mountainous areas, where they feed on grasses, shrubs and tree bark. Elk are known for their many vocalizations, including the bull’s signature “bugling”, which can be heard for miles during fall rut. Male elk can easily be spotted by their antlers, which can extend 4 feet above their head and weigh up to 40 pounds. These are used both to attract cows and spar with competitive males. After mating in the fall, a cow will give birth to a single calf in late May or early June. 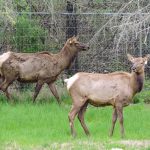 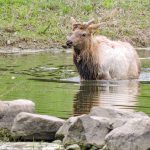 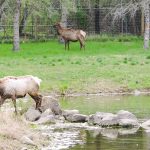 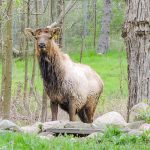 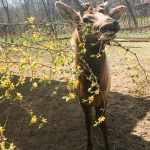 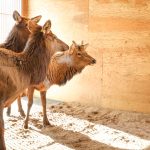