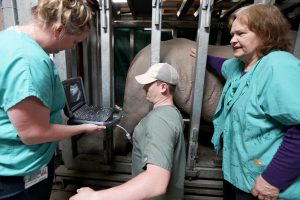 Potter Park Zoo Director of Animal Health, Dr. Ronan Eustace (center) and Dr. Carleton of MSU College of Veterinary Medicine ultrasound Doppsee the black rhino at Potter Park Zoo. Doppsee willingly participates in the ultrasounds and can walk away at any point during an exam. (Kaiti Chritz | Potter Park Zoo)

With some zoo animals, such as black rhinos, it can be difficult to determine whether a female is pregnant. Pregnant black rhinos develop subtle physical changes, such as slightly enlarged mammary glands. However, these changes occur very late in the pregnancy so additional methods are needed to confirm Doppsee’s status earlier in gestation. So how do zoo veterinarians confirm and monitor rhino pregnancy when there are few visible signs?

There are multiple methods to confirm pregnancy in a black rhino, including ultrasound and measurement of hormones. Progesterone can be detected in blood, urine, and feces. Measuring blood progesterone concentration is a reliable method beginning at three months post-breeding. The efficiency of ultrasound to diagnose a pregnancy varies with the quality of the machine, the skill and experience of the veterinarian, and having a cooperative rhino for a patient. Ideally, using information found by two to three different methods enhances the likelihood of accuracy to determine whether or not she is pregnant. 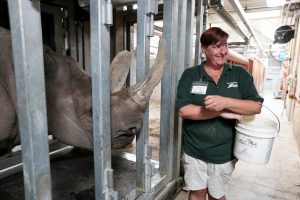 Zookeeper Amy feeds Doppsee treats as she stands for an ultrasound. Positive reinforcement training is used at Potter Park Zoo to teach animals behaviors that allow them to participate in their own health care. Doppsee willingly allows ultrasounds, blood draws, foot care and more. She always has the option to leave the area during an exam. (Kaiti Chritz | Potter Park Zoo)

Ultrasound exams during the earliest stages of pregnancy are easiest by transrectal scanning. The uterine horns are still relatively small, as is the early conceptus (small diameter sphere). A rhino uterus is larger and longer (farther into the abdomen) than that of a mare (female horse), limiting imaging of the uterus once it has progressed to more than 2 to 3 months of pregnancy. As the uterus enlarges, the transabdominal approach for ultrasound (external exam in the area of the flank) becomes possible.

Each kind of test is possible from hours of rhino training by the animal care and veterinary medical staff at Potter Park Zoo. Doppsee must voluntarily enter a specially designed chute to keep both her and the staff safe while performing behaviors for medical procedures. The chute allows her to leave and walk out into her enclosure at any time if she becomes tired or unwilling to continue. During the procedures she is fed favorite treats to reward her patience.

Safety is of the utmost importance when the veterinarian is performing a transrectal ultrasound examination of a rhino. The animal is so strong that even inadvertent moves she might make can damage the examiner’s arm. This is when the hours of training and the relationship built with animal care staff really pay off and are extremely valuable.

To confirm Doppsee’s pregnancy, blood, urine, and fecal samples were sent to the Center for Conservation and Research of Endangered Wildlife (CREW) located at Cincinnati Zoo. In addition, Dr. Ronan Eustace, Director of Animal Health at Potter Park Zoo, with assistance from Michigan State University College of Veterinary Medicine and Veterinary Medical Center theriogenologist, Dr. Carla Carleton, and theriogenology resident, Dr. Julie Strachota, confirmed pregnancy through multiple ultrasound evaluations. Throughout Doppsee’s pregnancy, the team will continue to ultrasound her and monitor blood progesterone levels that we can gather valuable information to help us better understand this critically endangered species and to monitor the health of the pregnancy.

There are fewer than 125 individual black rhinos being managed by the Species Survival Plan (SSP). All five rhino species (white, black, Indian [i.e., greater one-horned], Sumatran and Javan) are in serious danger in the wild as a result of poaching, a crisis that began in 2008 and is now responsible for more than 1,000 rhino deaths each year. 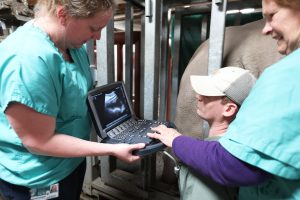