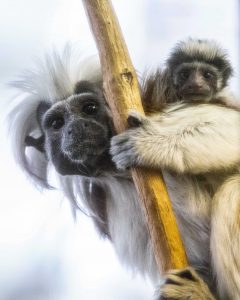 LG gave birth to triplet babies Thursday, May 23. While cotton-top tamarins are known to occasionally give birth to triplets, it is rare that mom and dad can take care of all three. The mother and father tamarins carry the babies on their back for the first few weeks of life, and two babies seem to be the optimal number for tamarins to carry. After giving birth, LG was observed carrying two babies, but not the third.

After the third triplet was given a brief check-up by the zoo veterinarian, animal care staff returned the baby to the exhibit in an attempt to encourage the adult pair to pick up and care for it. Unfortunately, while they were curious, neither parent was willing to pick it up. The decision was thoughtfully made by the animal care and veterinary team to begin hand rearing the infant to give it the best chance of survival. It was preferred to have all the babies stay with their parents, as the chances of the newborns surviving are much higher if they stay with mom and dad. 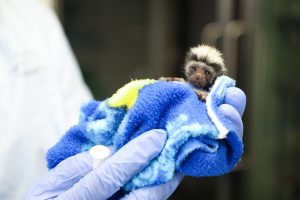 Animal care and veterinary staff at Potter Park Zoo thoughtfully made the decision to begin hand rearing a cotton top tamarin baby to give it the best chance of survival after its parents rejected it. She seemed to be doing very well in her first two weeks of life. Her health started to decline on June 8 and despite the zoo’s greatest efforts, she passed June 9.  (Photo: Kaiti Chritz | Potter Park Zoo)

Three staff members were dedicated to providing the best care possible for the newborn and taking shifts caring for her. The young female required feeding and cleaning every two hours from 6 a.m. to midnight and was spending her days in a warm incubator in the animal clinic at the zoo. For her first two weeks of life, the young monkey seemed to being doing very well. Animal care and veterinary staff started to see her health decline beginning June 8 and, despite every effort, she passed away June 9.

The zoo animal care team reports the two babies with mom and dad seem healthy, actively nursing and beginning to observe their environment. The two newborns are on exhibit with mom and dad, as well as the two juveniles born at the zoo in October of 2018. At this stage Yuri has begun to take over more baby carrying duties and an older sister was observed carrying one for a brief period of time. The two older siblings have been very interested in what their parents are doing with the newborns. Cotton-top tamarin juveniles learn to raise young by observing their parents. As the older two siblings are both females, this is a great opportunity for them to experience appropriate maternal care.

Potter Park Zoo was recommended to breed cotton-top tamarins by the Association of Zoos and Aquariums (AZA) Species Survival Plan. Currently, there are 200 cotton-top tamarins in 60 AZA accredited zoos across the United States. The goal of the Species Survival Plan is to ensure a healthy and genetically diverse zoo population to keep the species stable. 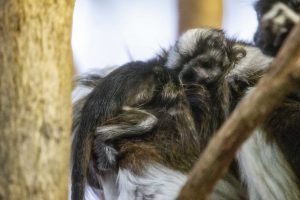 There are only about 6,000 critically endangered cotton-top tamarins left in the wild due to destruction of their forest habitat in Colombia. For this reason, Potter Park Zoo’s cotton-top tamarins have a very important advocacy role to help visitors learn about and connect with the species and be a voice for their wild relatives.

The cotton-top tamarin family is on exhibit in the bird and reptile house. Visitors are asked to help keep the young family calm and comfortable by keeping their voices down while visiting and staying behind barriers where present. 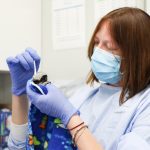 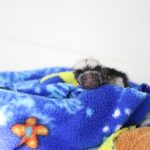 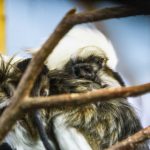 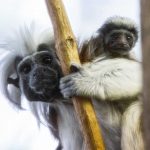 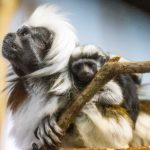