Just as the lifespan of humans is increasing, the average lifespans of animals living in zoos is increasing too. It is not unusual to hear about the oldest of a species still happily thriving at a zoo or aquarium. There are many reasons animals are living longer – better husbandry and welfare standards, more advanced veterinary practices and more insight into the challenges geriatric animals face. 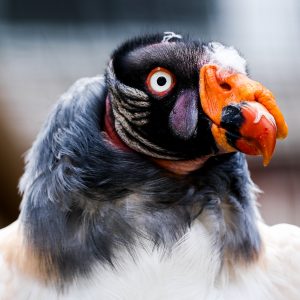 Animals experience many of the same aging processes as humans do such as arthritis, worsening eyesight & hearing, dental issues, unsteady gait, loss of muscle tone and diseases like cancer and kidney failure.   Our animal care team uses not only knowledge from personal experience, but also consults with experts from universities, other zoos, and the Association of Zoos and Aquariums (AZA) taxon and species advisory groups to determine the best course of action when it comes to managing age related diseases. Our goal is to ensure all treatable conditions are managed with the variety of resources available to us. The husbandry and medical care of animals can only be improved when we work together with other zoos and animal care scientists to develop better methods of detection and treatment.

In the wild an older animal will face different social and environmental pressures that impact the likelihood of their survival. When animals are in human care, many of these social and environmental pressures are reduced or absent. For instance, they don’t face the same dangers that can come from losing their place in their social group due to reduced virility, inability to compete for food or mates, or being ousted because they no longer benefit the group. Even something as simple as the loss of teeth can negatively impact an animal’s health by preventing them from consuming enough calories to survive. While these events may occur in human care as well, we are able to manage the situation by making changes to their housing, the conspecifics they live with, or the types and amounts of food offered.

For safety, animals frequently hide weaknesses that could cause a predator or dominant conspecific to take notice of them – which make detection of a health concern by animal care staff more difficult. The zookeeper staff not only needs to be an expert on each species’ natural history, but they also need to know the specific behaviors of each individual animal in their care. This knowledge, obtained from hours of careful observations, allows them to identify small physiological or psychological changes that can lead to detecting a more significant 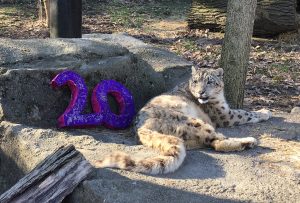 problem with an animal. Treatment or changes in care are often made with the involvement of the zookeeper staff that work with the animal, the curator and the veterinary team. Physical exams may be performed to determine the cause of the observed changes and pain medication, padded beds, or additional heat sources may be provided to increase comfort. By making changes to how geriatric animals are cared for, and the absence of many of the threats they would experience in the wild, they are able to live longer, healthier lives.

One great example of geriatric care of an animal is Potter Park Zoo’s snow leopard, Little Girl. This year she will turn 20. The median life expectancy for snow leopards is 15 years. But what does median life expectancy mean? If a snow leopard survives its first year of life, it has a 50% chance of dying before it turns 15 and a 50% chance of dying after 15. This is different from longevity, which is the oldest age any snow leopard has reached. The longest lived snow leopard was 22 years old; that’s roughly equivalent to a human living to be 122 years old. Little Girl is not quite as old as the oldest snow leopard on record, but she has still outlived many other snow leopards in the world. In contrast, in the harsh conditions snow leopards in the wild reside in and the physiological cost of providing for basic needs such as meals, research indicates an 8-10 year old animal is considered near the end of its life expectancy.

Due to her advanced age, animal care staff and veterinary staff have developed a plan of care that includes regular blood testing to monitor her kidney function (a common ailment in older cats), increased access to food, regular weigh ins, a heated box during the winter months and straw or padding in some of her preferred rest areas. 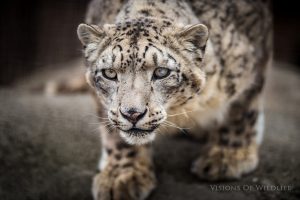 The keeper staff that care for Little Girl have spent many hours training her through positive reinforcement. In this method of training, the animal is rewarded for exhibiting a specific behavior when the keeper asks for it – either verbally or through a physical cue. Early behaviors trained are often very simple and grow with complexity as the animals’ understanding increases. The more behaviors an animal is able to successfully learn, the easier it is to meet their husbandry and medical needs.

At this point in her training Little Girl willingly gets on the scale to be weighed and allows staff to look at her eyes, draw blood from her tail, palpate her abdomen, and even perform ultrasound. With training, getting a blood sample takes a matter of minutes. It is much more complicated to get a blood sample if we are required to place her under anesthesia every time we want to check her blood values.

Potter Park Zoo is home to many elderly animals, and like other accredited zoos across the country we give them exceptional care. One of the principles we stand by is one of ‘whole life care’. Older animals stay at the zoo throughout their lives. From penguin to tiger to otter the animals get the best care possible every day of their life.

Some examples of our elderly animals compared to their AZA median life expectancy (MLE):

Oliver the male Northern Tree Shrew – 8 years (no MLE data, but he’s the oldest in the AZA SSP population)

Vinny the King Vulture – 50 years (no MLE data, but Vinny has been at Potter Park Zoo since 1989)