Guests at Potter Park Zoo may notice a few differences near the black rhino exhibit this week as the animal care team is working on a very unique project. The zoo’s resident black rhinos, Doppsee and Phineus, are being introduced for the first time in the hope that they breed. 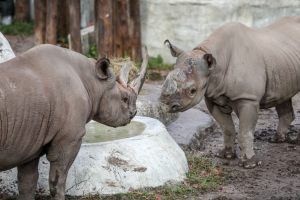 As part of the Association of Zoos and Aquariums (AZA) Eastern black rhino Species Survival Program (SSP) – both Phineus and Doppsee are vital to the continued existence of the black rhino population.  According to the International Union for Conservation of Nature and Natural Resources (IUCN), there are only 5000 black rhinos remaining in the wild, and only 57 at zoos in the US.  Of those 57 black rhino in US zoos, only 20 of them are recommended to breed by the SSP in 2017.  These recommendations are made based on genetics, age, relatedness and previous successes.

In April 2017, we were excited to bring in a male rhino to breed with our female rhino, Doppsee.  As recommended by the SSP, Phineus (read about his trip here) has spent the last few months becoming acquainted with our exhibit and getting to know Doppsee without physically meeting her primarily through his sense of smell and hearing.  Last Tuesday, after much planning, Doppsee and Phineus began the introduction process with the hopes of breeding in their future.  They have spent time together each day under the close supervision of the animal care staff.

In the wilds of Africa, black rhino are a solitary species that only come together to mate.  Female rhinos become receptive to breeding only once a month, so when the male and female initially meet there is a lot of aggression.  The male has to convince the female that he is a worthy choice as a mate.  He does this through posturing, foot dragging, urine spraying, sparring, and chasing.  While it may seem a little rough to us, rhinos are built for such encounters.  Their thick hide and heavy skull help protect them during these necessary pre-breeding displays.

It is not until the female black rhino fully enters estrus that she may allow the male to mate with her, and they will mate repeatedly until her estrus ends.   It will take us several months to know if Doppsee and Phineus have successfully bred – there’s no simple pregnancy test for rhinos.  Instead, we will monitor their success by testing the progesterone levels in Doppsee’s feces.  Black rhino pregnancies usually last for 15 months, so it may be a long wait, but we know it will be worth it.