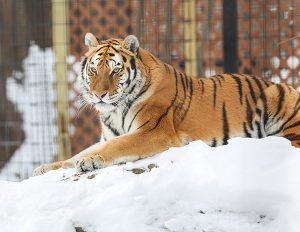 The Potter Park Zoo team is preparing to say farewell to one of its well-known animal residents. Liya the female Amur tiger is heading to another zoo following a breeding recommendation from the Amur Tiger Species Survival Program (SSP).

The SSP program, managed by the Association of Zoos and Aquariums (AZA), strives to maintain healthy, genetically diverse populations in accredited zoos. This requires strategic management and planning for the individual animals within the breeding population. Liya is leaving Potter Park Zoo for a breeding placement at another AZA accredited zoo.

“I was incredibly fortunate to be part of the team that hand raised Liya and her sisters,” said Annie Marcum, Carnivore and Primate Area Lead Keeper. “It has been amazing to watch her grow and become a tiger with an amazing personality that developed trusting relationships with the animal care staff. Experiencing Liya’s life so far has been a highlight of my career. She will be missed terribly, but we very much look forward to the next chapter in her life and the contributions she will make to the survival of her species.”

Liya is one of three tiger cubs born at Potter Park Zoo in 2011. Liya’s sisters, Savelii and Kira, left in 2014 for other zoos, as did Liya’s mother Nika. Liya, along with her father Sivaki, have been the two tigers residing at Potter Park Zoo for the past nine years. Liya and Sivaki have never lived together as adult because tigers are largely solitary, and they could not be placed together for breeding since they are related.

While this move will benefit the Amur tiger population in AZA zoos, it will also benefit the other big cats at Potter Park Zoo. The Feline Primate Building, originally built in 1938, last underwent extensive renovations in the late 1980’s. Moving a single cat out increases the space available to the other cats, especially the lions which do not tolerate Michigan’s cold winters. Potter Park Zoo, as an AZA accredited zoo, is continually striving to provide exceptional animal welfare and exceed the welfare standards established by the AZA.

The International Union for the Conservation of Nature (IUCN) lists the Amur tiger as endangered. Found almost exclusively on the far eastern side of Russia, and a small section of northeastern China, there are only an estimated 400-500 Amur tigers remaining in the wild. There are approximately 104 Amur tigers in AZA zoos across North America.