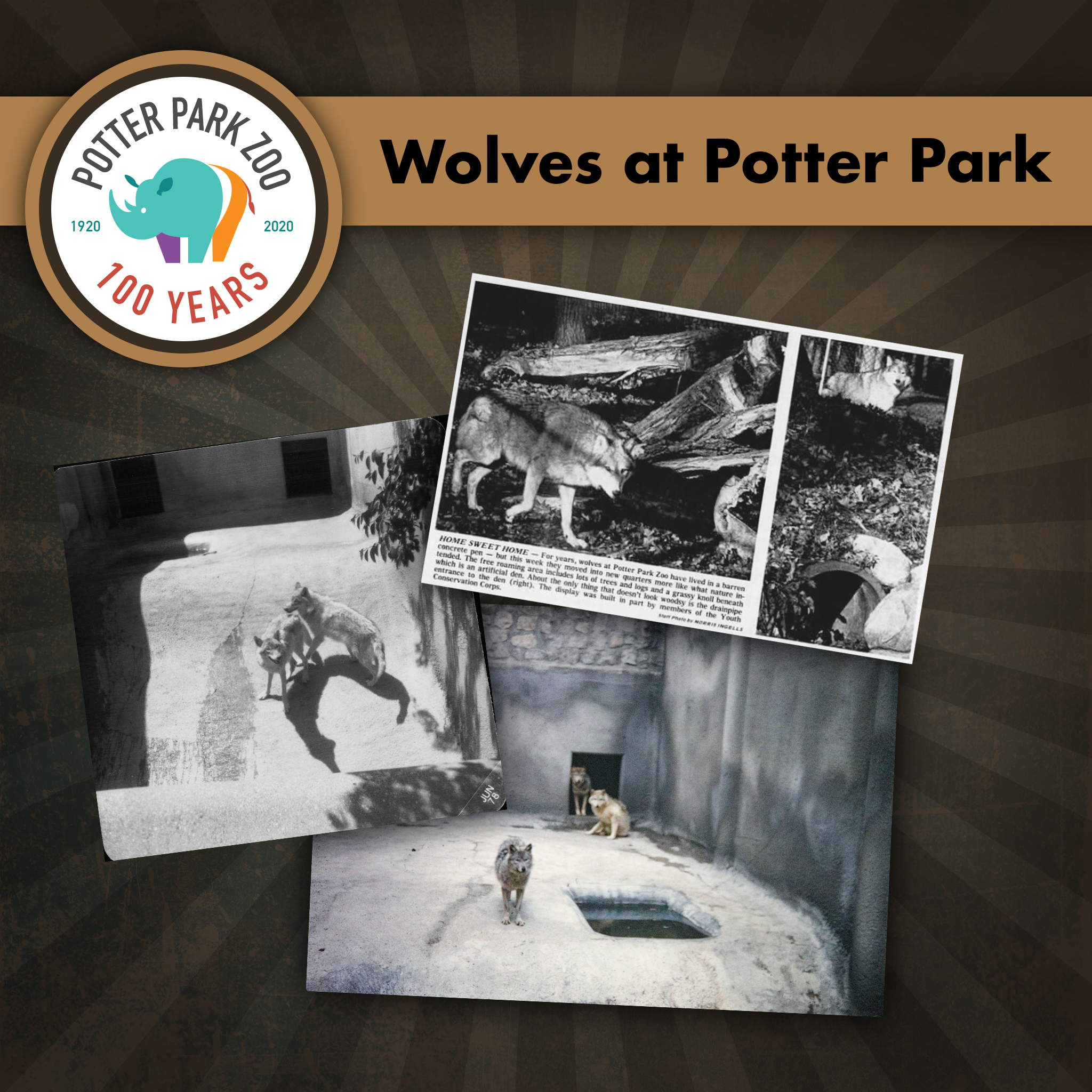 Wolves were early residents at Potter Park Zoo and have maintained a consistent presence over the years. Aside from their role in Potter Park’s history, the wolf is a testament to the success of animal conservation in the United States and has seen impressive population rebounds in recent years. The arc of the gray wolf – both at Potter Park and in the wild, will be summarized in turn. 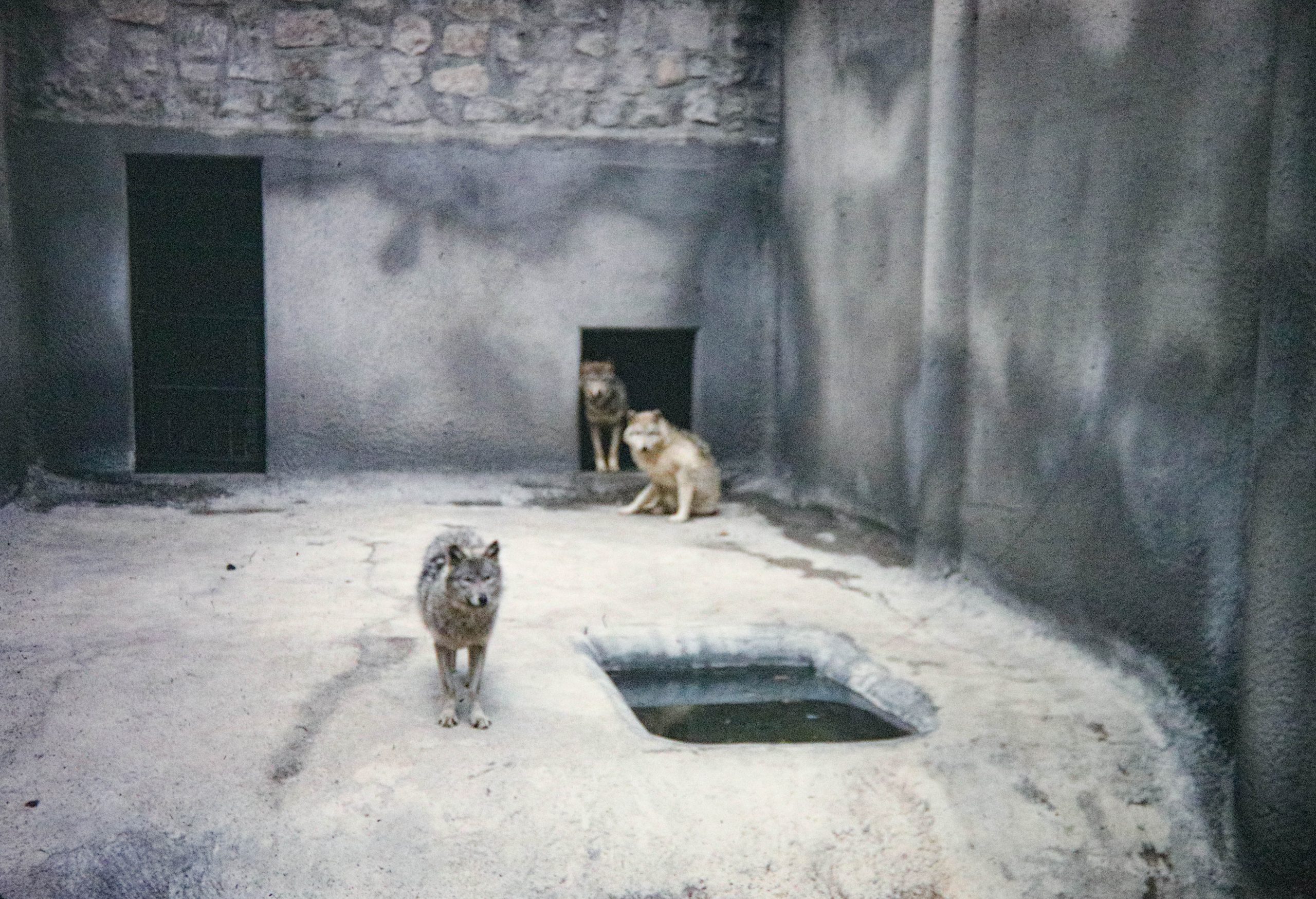 The first of the zoo’s wolves were transferred from a state game farm in Mason and became the first residents of the animal house when it opened in 1921. The animal house was Potter Park’s first permanent brick building, built with support from the city of Lansing and representing the zoo’s transition to a more enduring institution. Though the building is considered small by today’s standards, it held a variety of wild canine species over the years, and even became a temporary animal shelter for dogs during the late 1930s. In 1967, it was repurposed for zookeeper offices and a public restroom and is located near the current rhino yard. The large moats – built behind the Bird House in 1961 – would serve as the wolves’ next home. Its high concrete walls and floors made for easy cleaning, but as knowledge of animal care developed, it became apparent that the space was too small and outdated to meet inhabitants’ needs. The moats were officially decommissioned by 1990. (The large moats also housed bears, coyotes, and wolverines before its closure).

While the gray wolves settled in at Potter Park Zoo, populations in the wild had begun to face trouble. Resented by farmers for their tendency to prey on livestock, wolves became the subject of a federally funded extermination campaign, which offered a bounty for every wolf that was killed. By the 1960s, wild wolves were nearly extinct in Michigan, save for a few small packs in the Upper Peninsula and an isolated population on Isle Royale. In the rest of the continental states (excluding Minnesota), the animal had been exterminated completely. 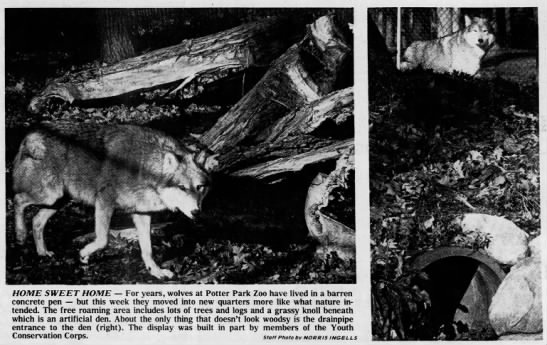 In 1981, back at Potter Park Zoo, the wolves had moved to an early version of their current location. It offered a larger natural area replete with grass, trees, and logs to evoke a Michigan woodland habitat. A large, grass covered concrete culvert was also added to function as a den. Two wolves Tanka and Chiron occupied this new enclosure and lived to 12 and 15 years respectively. Female Sasha replaced Tanka when she passed away. In 1994, the zoo wolves received an upgrade when the site was renovated, eliminating the culvert and providing more shade. Improved denning sites and larger holding facilities were also added, along with The Trapper’s Cabin, which provided an all-weather viewing area for visitors to observe and learn.

Wild gray wolves in the United States also saw positive developments during this time. In acknowledgment of their dwindling numbers, the federal government passed the Endangered Species Act in 1973, which prohibited the killing or harming of wolves, and instated a management plan to facilitate their recovery. These measures worked as intended, and by the 1980s, wild wolves were already experiencing a slow recovery. Populations began migrating naturally from Minnesota, Wisconsin, and Ontario back into Michigan and other nearby states.

Potter Park Zoo would welcome a number of new wolves in the ensuing years. Three young pups, one male (Lakota) and two females (Shawnee and Cheyenne), arrived from Maine in 1994, though Lakota and Shawnee did not live long. Three years later, Yukon, a male, joined Cheyenne, who lived 14 years. Bella, who came in 2009 lived 15 years – a long life for a wolf.

Tala joined Bella in 2012. After Bella died, two young male pups named Kamots and Tikanni arrived. The pair were Tala’s biological brothers that had been born after she left her birth zoo. (There were and are no plans to breed them.) The three can be seen at the zoo today and provide interesting glimpses of small-pack hierarchical dynamics. So far, Tala has maintained her alpha status. 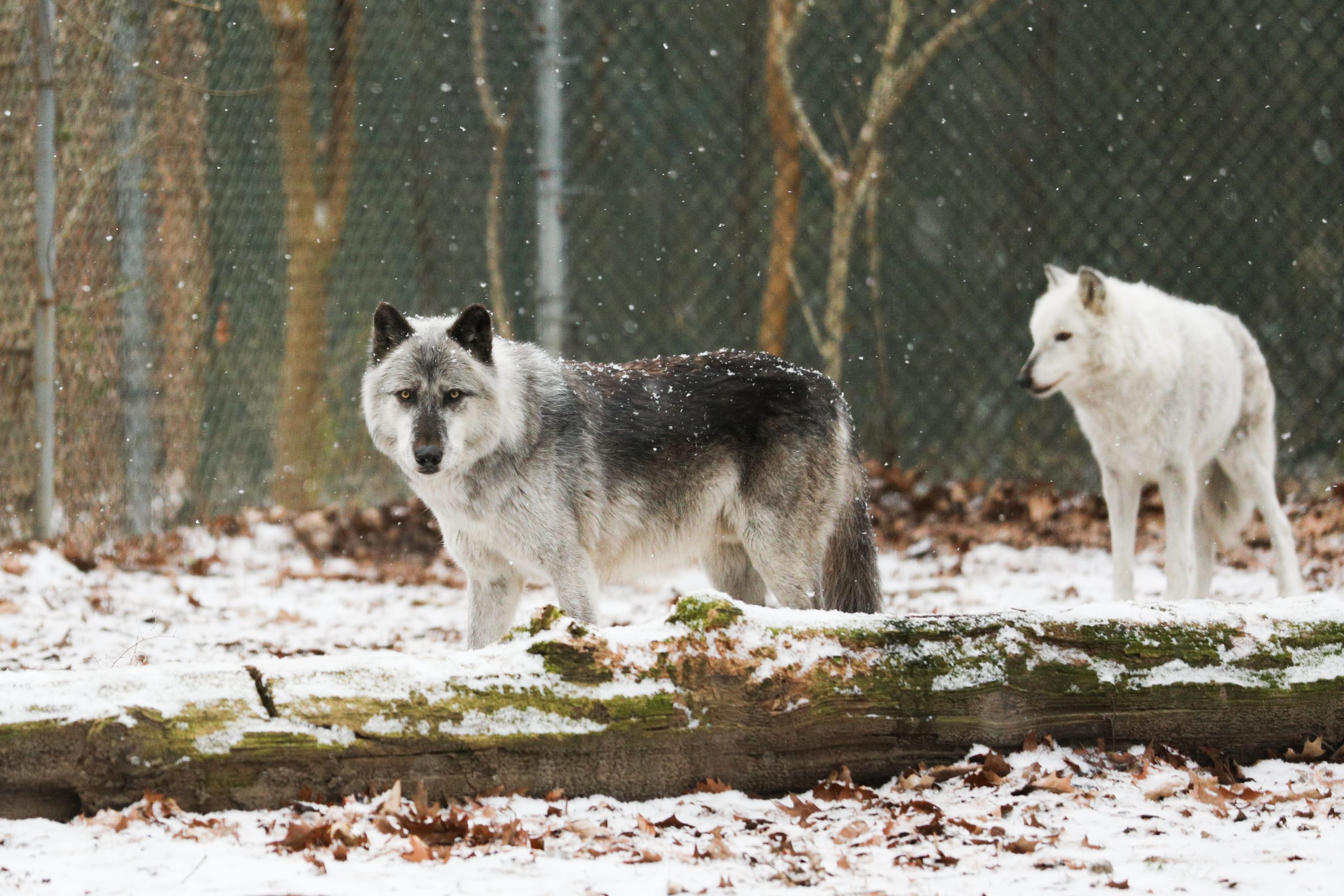 Wolves have been the subject of many myths and misconceptions over the years, which have contributed to their endangered status. Their presence at the zoo is an opportunity to share the story of their recovery with the public and illustrate how small conservation efforts and protective legislation can turn the tide for threatened species. Biologists estimated that there were only about 20 wolves in the Upper Peninsula in 1992 – a number that now rests between 600 and 700. In the lower United States as a whole, numbers have risen from a few hundred to over 5,000. As of January 2021, wolves were removed from the federal endangered species list, and the management of the state’s population was turned over to the Michigan Department of Natural Resources.

Do you have a story about wolves at the zoo? Share your story. Go to “Contact” on this website and leave a message in the drop-down menu to “What is your message regarding?” – “Story Submissions for Zoo Centennial.” Please include the decade or general time frame that applies to your story.