The oldest building still standing at the zoo was built in 1921. The animal collection was growing in the park, and additional housing was needed. A new animal building – a permanent brick structure, believed to be the current Keepers’ Lounge, was completed at the east end of the zoo. Wolves, raccoons, and a talking parrot were reported as early residents, and it provided indoor and outdoor accommodations.

The building is located between the Bird and Reptile House and the Rhino Yard. It is not identified from the outside. It is located up the hill across from the rhino viewing area. The king vulture exhibit is attached to the lower side, and there are public restrooms on the upper side. 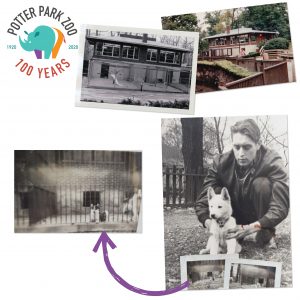 Historically this building was located near the old bear pits, which were not the same bear pits as those constructed behind the Bird House in 1961. The old bear pits were razed when the Bird House moats were completed. In fact, when the Lansing State Journal reported their impending destruction, the pits were identified as the “oldest of the park structures,” thus likely pre-dating the building discussed here.

In late 1936 the Ingham County Humane Society kept a temporary animal shelter for stray dogs and cats in the building. Dogs were sold at that time. It’s not clear how long that lasted or if zoo animals were also kept there at the same time.

By 1967 plans were made to renovate this building for offices and public restrooms. At that time the building, known as “the dog house,” held dingoes and African cape hunting dogs. The dog exhibits were moved, likely to the new large moats behind the Bird House. It is not clear if the building acquired its nickname during its animal shelter days or because of the many canine species that were held there over the years. Perhaps it was a little of both. Workers in that area were known as the dog-house crew.

Note: If you look at the building from the restroom side, you can see the faint outlines of where doors used to be for the animals.

How far back does your memory of the zoo go? Share your story. Go to “Contact” on this website and leave a message in the drop down to “What is your message regarding?” – “Story Submissions for Zoo Centennial.”  Please include the decade or general time frame that applies to your story.