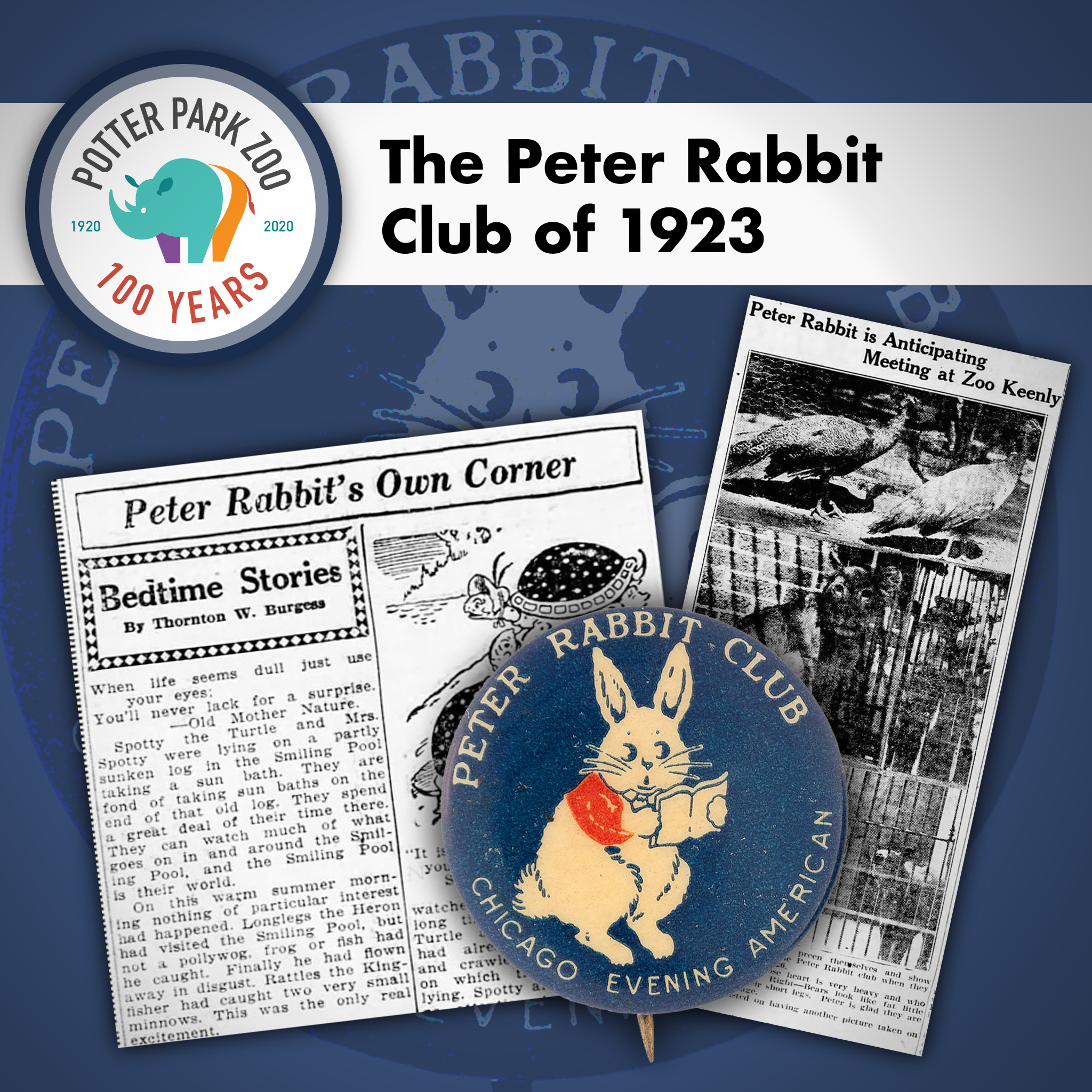 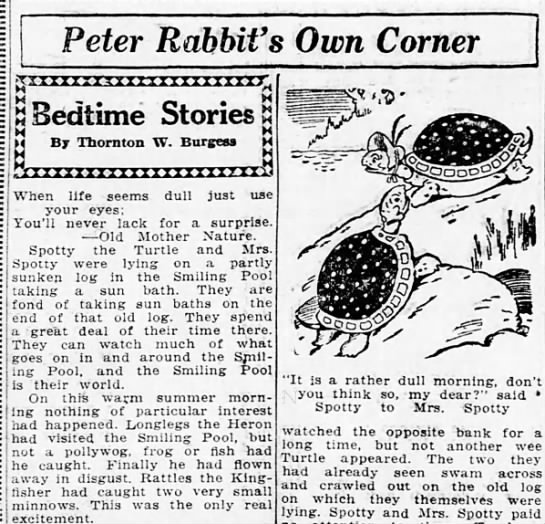 In the summer of 1923, the Lansing State Journal (LSJ) invited children in the area to join the Peter Rabbit Club. The club required members to pledge to be kind to animals, and its summer activities included a visit to the Potter Park Zoo.

The Peter Rabbit Club was part of a larger national trend, and in the 1920’s, local newspapers around the country  promoted clubs for children by the same name. These clubs all referenced the same Peter Rabbit – a fictional character in children’s books written by Thornton Burgess (1874-1965). (Burgess, in turn, borrowed the name of his character from the more famous author Beatrix Potter, who created the original Peter Rabbit. Clearly, the name caught on). Burgess was a conservationist, and used his own observations of nature to inspire his plots and characters. He wrote over 170 books and 15,000 daily “Bedtime Stories,” which were syndicated in newspapers from 1912 to the early 1960s.

These stories came to the LSJ that summer in a column entitled “Peter Rabbit‘s Own Corner”. In this section, Burgess’s stories were printed alongside illustrations by Harrison Cady, who’s rendition of Peter Rabbit graced buttons for clubs in other cities. Local Lansing members received a Peter Rabbit Button too, though a sample could not be found to verify whether or not the design was Cady’s.” The “Corner” also featured club news and membership applications. By August there were over 600 local members.

The peak of club activities ran from June to September of that year. During that summer, children sent in poems and stories about their observations and experiences with animals. Letter-writing contests were announced, with the first focusing on birds. Children were encouraged to write using their own, in-person observations rather than what they had learned from a book. At the club’s next meeting (a special visit to the Potter Park Zoo) the winner would be awarded a copy of Thornton Burgess’ Bird Book for Children.

On visit day the LSJ provided buses to carry the children to the zoo. The superintendent of Potter Park talked to club members about the animals, including Queenie a baby lioness and Buddy a small bear – both recent arrivals from the Milwaukee Zoo.

The City Park Commissioner heard about the visit and partnered with the LSJ to offer a second writing contest for the club – this one asking children to recount what they observed during their visit to the zoo. Club news in the LSJ encouraged children and their families to visit the zoo on their own if they had missed the meetup, and letters were accepted through August. Prizes were awarded in September and included $3 for first place, $2 for second, and $1 for third. One of the children recalled the experience in a poem.

Once we went to the zoo

They had a lion cub “Queen”

They also have a bear

It did not give me a scare

Some monkeys performed some tricks

They were very good acrobats.

They had other animals too

At the good Potter Park zoo.

Activities continued into the next year, and another field trip was planned for May 1924. After this, there were no formal accounts of the club or what became of it. The Bedtime Stories, however, would be a regular feature in the LSJ for decades.

Do you have a story about these Bedtime Stories that appeared in the State Journal or a Peter Rabbit Club button that might have been found in your family’s possessions? Share your story. Go to “Contact” on this website and leave a message in the drop-down menu to “What is your message regarding?” – “Story Submissions for Zoo Centennial.” Please include the decade or general time frame that applies to your story.