This saga began in 2009, when Potter Park Zoo had one Amur tiger at the zoo – Sivaki, a male who had been born here in 2005 and grew up with his two sisters. In 2009 it was time for the girls to leave for other zoos, and we wanted to try to have some more cubs. Of course, we needed a female.

The Species Survival Plan (SSP) for Amur tigers determined that Nika, a four-year-old female from Connecticut’s Beardsley Zoo in Bridgeport, would be a good match. The Association of Zoos and Aquariums (AZA) SSPs are managed breeding programs across AZA-accredited zoos designed to produce and maintain sustainable, genetically diverse zoo populations. A good match means that unrelated individuals are paired for the best chance to produce genetically diverse healthy offspring. This requires zoos to cooperate and send animals to another zoo if that is best for the species.

Once Nika arrived and settled in to the new place, the two started to be put together during her cycles. Eventually Nika became pregnant in 2011.

September 13, about 100 days later, the gestation length of Amur tigers, we were watching Nika in her den on closed-circuit television as she gave birth to four cubs. We were thrilled as she was taking care of the babies, which, were all girls. 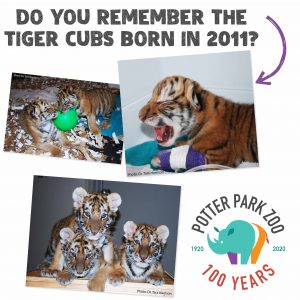 Within a day, concern grew as Nika covered a cub with straw and ignored it, indicating trouble with the cub. The veterinarian wanted the cub removed in order to see what was going on. In fact, the cub had died. The necropsy indicated pneumonia, and if that cub had it, the others might also. In fact, Nika started behaving the same as with the first cub.

The vet directed the remaining three cubs to be removed from mom and taken to the zoo clinic to receive medication and breathing treatments. All three survived under the expert care of the zoo animal care team. By that time mom had stopped lactating and might hurt the babies if she were put together with them. So, the young tigers would remain at the clinic and be bottle-fed by medical and keeper staff five times a day and twice at night. 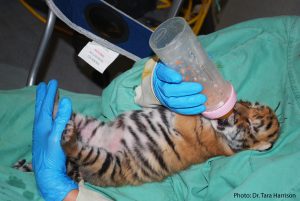 At this time the Cub Cam was implemented to monitor activity in the nursery, to the delight of viewers everywhere. Twenty-four hours a day the cam live streamed on the Internet, revealing what three young tiger cubs do at all hours of the day and night. Viewers from all over the country witnessed feedings and slumber, but the play sessions were particularly captivating.

Together the cubs were learning to be tigers by practicing skills that would some day serve them as adults: There was chasing, biting, and wrestling. Balls and chew toys were among the enrichment items added to the space, with a climbing structure making for competitive king-of-the-castle opportunities. These activities helped the cubs develop strength and coordination, and provide experience interacting with other tigers.

Viewers loved the Cub Cam and even made donations to the zoo because of it. Visitors were excited when the cubs finally went on exhibit and could be seen in person. That happened in December. The cubs transitioned to an all-meat diet, the keepers no longer went in with them, and together they learned tiger natural behaviors.

At age three, Kira and Savelii went off together to the Bramble Park Zoo in Watertown, South Dakota at the recommendation of the SSP. It was thought that their bond would make the transition easier. In 2019 both went their separate ways to other zoos: Kira to Zoo Boise in Idaho and Savelii to Cheyenne Mountain Zoo in Colorado Springs. Ameliya, also known as Liya, has remained at Potter Park with Sivaki.

There are no tiger breeding plans at Potter Park for now. If any develop, at least one of our tigers would have to go to another zoo and be replaced with an unrelated tiger. In the meantime, dad and daughter alternate indoor and outdoor spaces, happily leading the solitary lives that adult tigers prefer.