The team at Potter Park Zoo is celebrating the birthday of Serena, the snow leopard, who recently turned 19. Serena, also commonly referred to as Little Girl, is a life long zoo resident and her birthday will be celebrated with a special enrichment she’ll receive Sunday at 3 p.m., according to zoo officials. 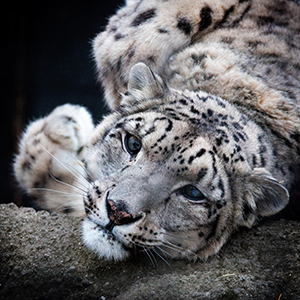 “Little Girl is a long time favorite of zoo staff, docents, and volunteers and it is a tribute to our team that she is living a healthy life as one of our senior citizens here at Potter Park Zoo,” said General Curator Sarah Pechtel.

Pechtel said the median life expectancy of snow leopards in captivity is 14.5 and this time frame is much shorter for those living in the wild. Little Girl is one of the oldest snow leopards living in North American zoos.

The aging snow leopard still enjoys many of her favorite things including catching wild birds and squirrels that stray into her exhibit. Her favorite treat is quail and this is a commonly offered enrichment item provided by keepers for the cat.

Little Girl has received the highest level of medical care throughout her life. In 2010 she was the first snow leopard in the world to ever be artificially inseminated without the use of anesthetic. This was possible because of her high level of training. Keepers use operant conditioning and high value food rewards to encourage Little Girl to voluntarily offer certain behaviors. Training allows veterinary staff to perform some medical procedures and keepers to perform many husbandry procedures without stressing the animal. Some of the behaviors she demonstrates are holding still for blood draws and ultrasound procedures, opening her mouth on command, and showing the keeper staff her paws.

Snow leopards have been listed as an endangered species since 1986 and are one of the more than 300 Species Survival Plans (SSP) administered by the Association of Zoos and Aquariums.  They face multiple threats in the wild including poaching, loss of prey species and persecution by herders when the cats turn to livestock for food.  Due to their habitat in the high mountain ranges of central Asia, it’s difficult to know how many snow leopards remain in the wild. Potter Park Zoo supports the Snow Leopard Trust whose mission is to protect the endangered snow leopard through community-based conservation projects that are based on an improved scientific understanding of snow leopard behavior, needs, habitats, and threats. Visit Potter Park Zoo’s AniMall gift shop and support snow leopard conservation by purchasing merchandise from the Snow Leopard Trust.