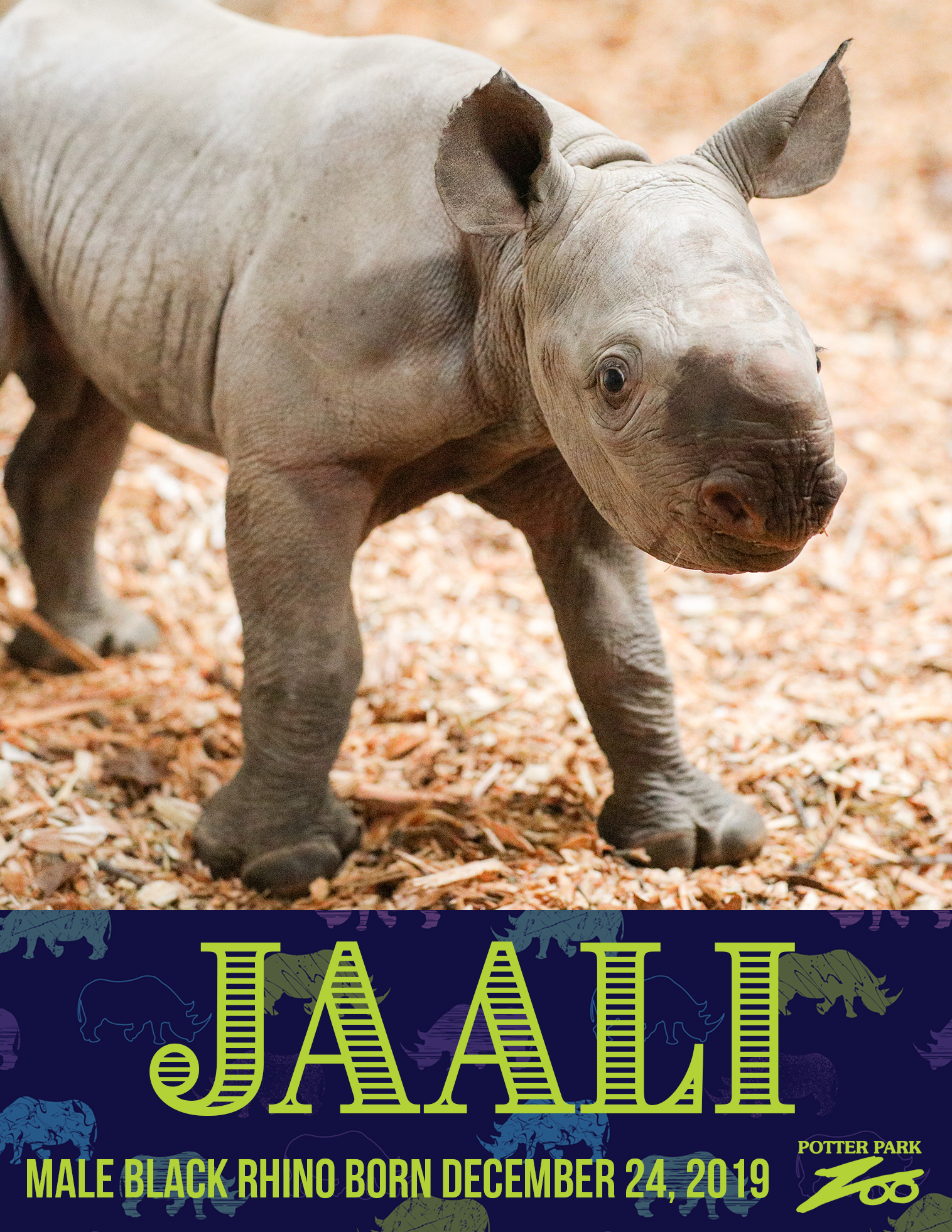 Potter Park Zoo’s two-week-old black rhino calf has a name after a week-long public vote: Jaali!
Jaali (pronounced jolly) means “powerful” in Swahili and is very fitting for this incredible calf who is one of only 54 in the population of eastern black rhinos in zoos accredited by the Association of Zoo and Aquariums (AZA). Jaali was born Dec. 24 at 5:40 a.m. and is the zoo’s first black rhino calf in its 100-year history.
The zoo held a public naming contest over the past week where supporters could donate $5 to vote for their favorite name for the popular rhino calf. The other name options were Reggie, Azizi, Enzi, Mosi, and Bash. The naming contest brought in over $10,000, which will go directly to the animal health program at the zoo.
“We really enjoyed watching our supporters get excited about naming this calf,” said Amy Morris-Hall, Potter Park Zoological Society Executive Director. “And the funding we received for our animal health program will be very helpful to the work we do.”
The zoo team is thrilled by the international attention received by the rhino calf. One thing is for sure – he sure is a “Jaali” good fellow!
More About Jaali
Jaali was born Dec. 24 at 5:40 a.m and is the zoo’s first black rhino calf in its 100-year history. Mom Doppsee and Dad Phineus are both first time parents.
Doppsee and Jaali are bonding behind the scenes in the rhino barn at Potter Park Zoo and will not be visible to the public until weather allows in the spring of 2020. Animal care and veterinary staff report the calf continues to nurse and gain weight. He’s very spunky and has been seen play sparring with mom many times. The zoo will be posting regular updates including pictures and video of Doppsee and the calf on their Facebook and Instagram pages, as well as the Potter Park Zoo blog.
Black rhinos are critically endangered and are being pushed to the brink of extinction by illegal poaching and loss of habitat. Current estimates show that only about 5,000 individual black rhinos are alive in the wild today.
There are just over 50 black rhinos in human care at AZA accredited zoos, which are managed by the Species Survival Plan (SSP). The SSP maintains a genetically healthy population of black rhinos in zoos. The father, Phineus, came to Potter Park Zoo in 2017 from Texas specifically to breed with Doppsee. On average less than two black rhino calves are born in human care each year, making every calf born vital to this endangered population.