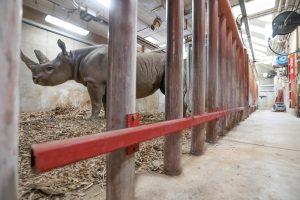 New vertical barriers have been added in the rhino barn to keep the rhino calf and zookeepers safe when it arrives.

The keepers and zoo staff are eagerly awaiting the arrival of Doppsee’s calf, but there’s a lot more that goes into getting ready for a baby rhino than one might think!

A big step in preparing for the baby is making the rhino barn safe for the new calf while also keeping the comfort of Doppsee and Phineus in mind.

In the rhino barn we have large post-like protective barriers that allow animal care staff to train and examine the rhinos, while keeping a safe structure between the person and the animal. The spaces between these posts are the appropriate distance apart for Doppsee and Phineus, but they are wide enough for a rhino calf to walk right through them! We reached out to other AZA zoos that have experience with rhino calves and determine we needed to add a horizontal bar along the posts a foot off the ground to ensure the calf stays safe in the holding stalls.

We worked with our maintenance staff to create a plan for installing the bars, which included ensuring Doppsee and Phineus were comfortable during construction. We desensitized the rhinos to the new bars over the course of several days before installing them by laying them in areas where they could see them, but did not have contact with them. They were mostly curious and became used to them pretty quickly.

You’ll also notice changes to the rhino yards next year as some extra barriers will be put in the yards to keep the calf safe. That might include a chain barrier around some posts or shallow mud wallows while the calf builds its strength.

Doppsee’s birthing stalls will be bedded down nicely with a lot of straw and hay to give the calf good footing as it is learning to stand. Did you know that black rhino calves can stand anywhere from 30 minutes to 5 hours after birth?

Keepers are further preparing for Doppsee and Phineus’ calf by adding cameras to Doppsee’s birthing stalls. Black rhinos need privacy during labor and birth. We will have veterinary and animal care staff watching Doppsee’s labor the entire time via the camera system which will allow us to keep Doppsee’s environment quiet. We will only intervene if it is deemed medically necessary by the zoo’s veterinary team.

All of these changes will make the barn safe for all three rhinos as the calf grows up. You can help us prepare for the rhino calf too! Visit our Amazon wish list to purchase items (http://bit.ly/ppzwishlistor help all of our rhinos by purchasing fresh browse through Opportunity Growers (www.opportunitygrowers.com). The rhinos favorites are acacia or mulberry.