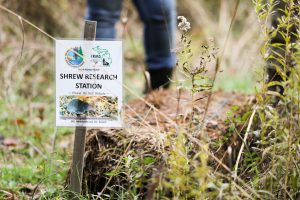 Since mid-July Potter Park Zoo has been partnering with the Michigan Wildlife Conservancy (MWC) to assist in a field study looking into the presence of least shrews at Bengel Wildlife Center in Bath, Mich. The least shrew is a small mammal only weighing between three and six grams. Least shrews are most commonly found in open fields with tall grasses or areas with fallen trees and brush that provide protection. Least shrews are currently listed as Threatened in Michigan but have not been officially recorded in the state in over 50 years.
Because least shrews must eat their body weight in food every 24 hours, it was decided not to use a trap-and-release method. Pat Rusz, Director of Wildlife Programs at MWC, created wooden scat traps designed to allow collection of scat left behind while gathering or consuming food placed in a feeding chamber. Unfortunately, there is little research available on least shrew scent marking behavior and food preference for surveys. Due to the lack of resources everyone was unsure what to expect from this field survey.
Scat was collected almost immediately after setting the traps and has been continually collected since. Based on scat size it appears that short tailed shrews have been 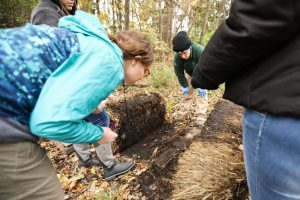 the most common animal to use the traps. Since they are significantly larger than least shrews, traps with smaller entrances were added to some of the survey sites. The success of these traps is still uncertain. Information has not yet been received from the scat analysis. This information should lead to an understanding of which animals are utilizing the traps.
The mission of the zoo is to inspire conservation of animals and the natural world. We hope to inspire people to get out and be citizen scientists in their own back yard here in the greater Lansing area!
Those interested in getting involved in conservation right here in Lansing will soon have an opportunity.  Join the zoo team for FrogWatch training in early 2019!
Learn more about the training here. https://potterparkzoo.org/become-a-frogwatch-citizen-scientist/​ 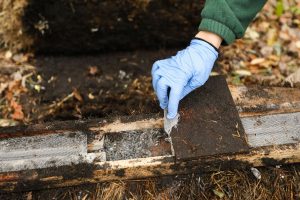 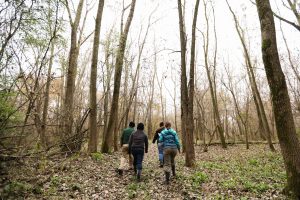 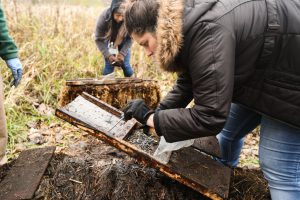