There’s something special about seeing babies at the zoo – the activity, the interactions, and in the case of primates, the comparisons to human families that come to mind. That was the mandrill exhibit for almost a decade, from 2007 to 2016. Here’s the story.

Loko the big male mandrill arrived at Potter Park Zoo from the Gladys Porter Zoo in Brownsville, Texas, in 2007. The Species Survival Plan for mandrills had made a breeding recommendation for him to join our females, Abuuka and Gladys. (Yes, Gladys had previously come from the Gladys Porter Zoo too.) Abuuka and Gladys were part of a group that came to repopulate the renovated Feline/Primate House in 1989. They, along with two other mandrills, remained a presence here through the 1990s and into the 2000s. Female Nikki passed in 2003 and big male Chad in 2005. 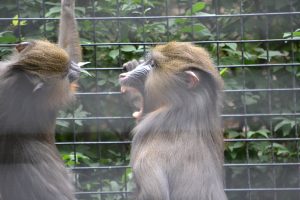 Loko and Abuuka served their species well. (1) They increased the number of mandrills in zoos. They produced two male offspring, who together have sired at least three babies at other zoos. (2) They also were fine ambassadors as educators, by living their lives on exhibit and showing us how a mandrill clan behaves in a family setting and how important it is to teach their young how to respect and behave toward the much larger and powerful lead male, and at the same time teach them how to become that leader. Thousands of visitors witnessed these fascinating vignettes of mandrill life.

While Loko seemed especially attracted to Gladys, it was Abuuka who was mother to his two sons. Jelani was born in late 2007 and Jabari came along in 2010. Gladys passed away in 2010 before Jabari was born. 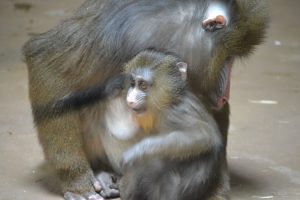 Abuuka was a caring mother, holding her sons close as fragile babies and youngsters and even welcoming them both near for cozy naps together when Jelani was older. Mandrill dads are not warm and cuddly sorts who play with their young. That is the mom’s job. Dad keeps order in the group and ensures safety. And that Loko did. It got particularly interesting when Jabari joined the family. Loko would keep an eye on the two brothers. When things got too rowdy, it was Loko’s job to step in. He might give a serious look, chase, or literally put his foot down. Jelani, as the big brother, was the one who usually got in trouble, and of course, young Jabari knew how to make that happen. There were a lot of things for us humans to relate to in that family.

Loko’s large size was intimidating, and he used it to command respect within his family. It was crucial that his sons learned this. Missing this social education could prove disastrous when navigating mandrill society.

The family went through changes. Mom passed away in 2012 when Jabari was still young, and Loko became a single dad. Jelani and Jabari would nap together like they had with Mom. Susannah arrived and joined the group, but never really moved into the stepmom role. When Jelani left for the Denver Zoo in 2013, Jabari and Susannah were rivals.While Jabari was smaller than Susannah, she dominated. When Jabari grew bigger, he took over. Dad had grown older and more arthritic, and he became more lax with Jabari’s discipline.

Activity in the exhibit slowed considerably when Jabari moved to the Los Angeles Zoo in 2016, and it was just Loko and Susannah. Loko passed away in April 2020, and Susannah followed two months later. It was the end of an era at Potter Park, but the beginning of new ones for Jelani and Jabari at other zoos. Both brothers’ upbringings had given them what it took for them to become the Big Guy in their own families.