Oslo the Owl is Having a Big Birthday! 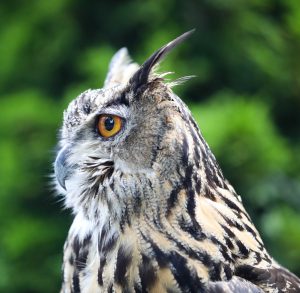 Oslo, the iconic ambassador animal for Potter Park Zoo, is 25 years old today! Oslo is a Eurasian Eagle Owl who is the best known of all of Potter Park Zoo’s ambassador animals. For the past 16 years he has wowed thousands of people of all ages, appearing in hundreds of educational animal presentations at the zoo and outreaches throughout the region. Oslo, due to his commanding presence, is especially popular at the many community events we attend and he is a key component of the zoo’s educational programs.

Oslo has a very interesting history. He was hatched at the World Bird Sanctuary, a well-known bird conservation center near St Louis, Missouri. His birth statistics:

As a 2 week old hatchling he was sent to the Cincinnati Zoo. He was hand raised there by zoo staff and once he was old enough to fly, Oslo became one of the stars of their flighted bird of prey show, flying over audiences heads in a large outdoor amphitheater. After several years of being in the flighted bird show, he was rotated out and lived in an off exhibit area of the zoo in his own enclosure. In May of 2003, Oslo came to Potter Park Zoo. During the next couple of months he got used to his new home and spent significant time with the zoo’s education and animal care staffs.

Surprisingly, Oslo’s first public appearance was not at the zoo, but at a late night event at Schuler’s Book Store as part of a Harry Potter book unveiling. He was a big hit then and has been ever since. Oslo has several attributes which make him a special ambassador for the zoo:

So, next time you see Oslo at the zoo, or out and about mid-Michigan, say “Hi” and wish him a Happy Birthday!