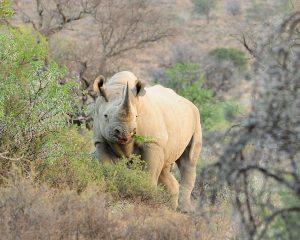 Black rhinoceros populations have declined drastically over the past 60 years.

Since this precipitous decline, black rhinoceros have been listed as critically endangered by the IUCN Red List.

Potter Park Zoo is committed to help save black rhinoceros and throughout Doppsee’s time at Potter Park, we have participated in many studies trying to improve the success of captive breeding of black rhinoceros.

What is Potter Park Zoo Doing to Contribute to Eastern Black Rhino Research? 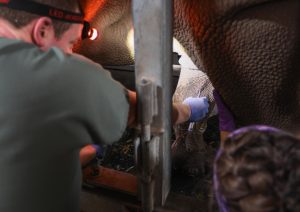 Dr. Ronan, Potter Park Zoo Director of Animal Health, draws blood from Doppsee the black rhino. Doppsee’s incredible training and trusting relationship with her zookeepers allow for regular blood draws. This is voluntary, and she always has the choice to walk away.

In the last five years, the zoo has participated in studies ranging from investigating the effect of olfactory cue and courtship on breeding in black rhinoceros and to determining if measuring hormones in urine can predict when a female black rhinoceros will be most receptive to breeding by a male rhinoceros.

Future studies that the zoo is planning to participate in include looking at how the gut microbiome changes throughout the lactation period, efforts to determine the genetic diversity for the current AZA eastern black rhinoceros captive population, evaluating how black rhinoceros milk composition changes throughout lactation, and work on trying to improve artificial reproductive technology techniques. 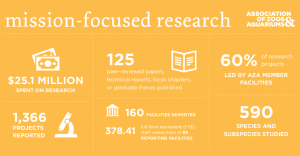 AZA-Accredited zoos and aquariums contribute millions of dollars to wildlife research every year. By supporting your AZA zoo, you’re helping us continue to support this essential research. 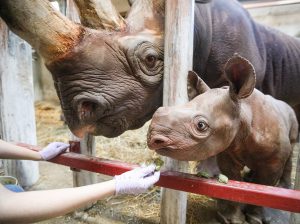 Doppsee gave birth to her calf Jaali on Dec. 24, 2019. Jaali is the first black rhino calf born at Potter Park Zoo in its 100-year history. 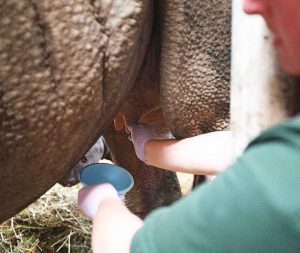 Zookeeper Amy takes a milk sample from Doppsee the black rhino (her calf Jaali is seen in the background). Doppsee’s incredible training allows the animal care staff to collect milk for research.