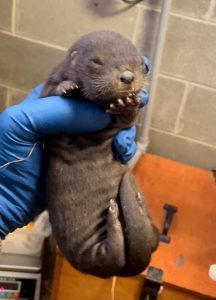 “This is Miles and Nkeke’s third litter of pups, and while each litter has been exciting, this one is especially so since it is their first set of triplets,” said Carolyn Schulte, Potter Park Zoo otter keeper. “Nkeke is an experienced mom and thanks to her excellent relationship with the keepers we have been able to monitor the pup’s growth closely to ensure they each grow at a healthy rate.”

At two days old, a quick physical exam was conducted to get a baseline body weight and check for any abnormalities or injuries. The pups weighed in at 107 grams, 88 grams, and 75 grams. Potter Park Zoo Director of Animal Health Dr. Ronan Eustace said triplets can be challenging for an otter to raise.

“With triplets there are more demands on the mother and we’re cautiously hopeful that she will be able to raise all three without veterinary intervention,” said Eustace.

While it’s difficult to determine gender at this stage, Eustace believes two are female and one is male. The pups have been nursing regularly over the past few weeks and will be continually monitored by the animal care team over the next couple of months.

The first signs of pregnancy were observed last month, but a phenomenon known as “delayed implantation” made it difficult for staff to estimate a due date. Delayed implantation – a trait shared by approximately 100 other mammals – occurs when a fertilized egg is not immediately implanted in the uterus and lies in dormancy for an indeterminate amount of time. River otters delay for at least eight months, but the egg can remain dormant for as many as 273 days. Once it has been implanted, gestation is about 60 days.

Nkeke was transferred to Potter Park Zoo in 2016 from the Roger Williams Zoo in Rhode Island, and Miles was born here in 2013 (Potter Park Zoo’s first otter birth). In accordance with the Species Survival Plan (SSP), the Association of Zoos and Aquariums recommended that Nkeke and Miles breed, and they’ve produced seven pups since. The first litter of two males was born in Feb. 2018, and the second – also two males – in Feb. 2020.

Otter pups are born fully furred, but take around five weeks to open their eyes. They start playing at around six weeks and begin swimming lessons shortly after. Because rearing is done by mom alone, zoo visitors can still see father Miles on exhibit, but will have to wait a few months before Nkeke and the pups are out and about.

Follow our social media and blog for regular updates on the new otter family, and stay tuned for a naming contest!